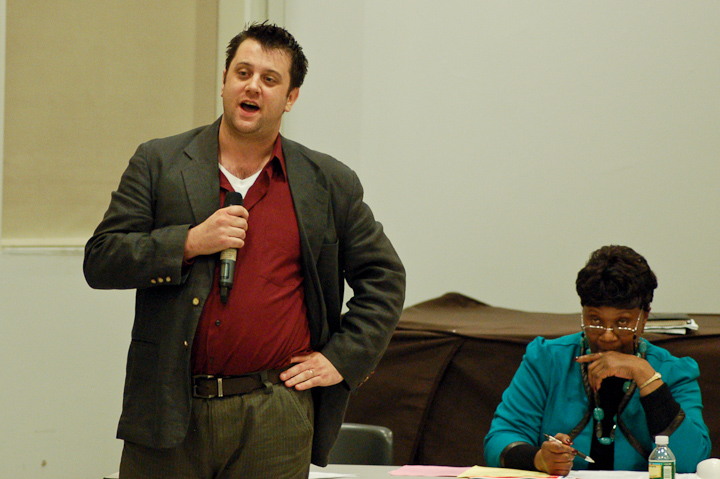 After more than a year of debate, Community Board 9 voted to co-name part of 121st Street after legendary comedian George Carlin on Thursday night.

"It's been a long, hard process," community board member Carolyn Thompson said. "It took more than a year. We finally came to a happy medium."

Carlin grew up on the 500 block of 121st Street, between Broadway and Amsterdam Avenue, although the community board voted to name the 400 block, between Amsterdam and Morningside Park, after him. The revision to comedian Kevin Bartini's original proposal was a concession to Corpus Christi Church, which is located on the 500 block and opposed the renaming because of Carlin's vulgar rhetoric and anti-religion ideology.

The proposal passed 25-4, with three abstentions. The co-naming now awaits the approval of the City Council. If the council gives the OK, the block near Carlin's childhood home will become George Carlin Way.

Bartini, a warm-up comedian for "The Daily Show," came up with the idea last year. Between a Change.org petition and help from volunteers working the street, Bartini collected 9,000 signatures in support of the co-naming.

"It's a huge relief that it went through," Bartini said after the vote. "I had measured optimism, but then once I gave my address and saw some smiling faces, I felt more optimistic."

Bartini has faced staunch opposition from Corpus Christi Church for months, but he met little resistance at Thursday's community board meeting. He received only two questions from board members—one concerning what Carlin would have thought about the co-naming, and another about his relationship with members of the Carlin family, with whom he has corresponded since he sought their blessing last year.

Former community board chair Larry English asked Bartini whether the co-naming of the block accorded with Carlin's characteristic irreverence.

"I think it's so ironic," English said. "He would find a fight about naming a street after him so silly."

But although he said that Carlin, who died in 2008, would find the co-naming "pretentious," English voted for the proposal. He added that Carlin had "one of the greatest humors—certainly mentioned in the same breath as Richard Pryor."

"It's appropriate given that he's from this area, even though I think he'd take a good laugh at our expense," English said. "If someone's statue was going to be put up, George Carlin checks every box of someone you would do that for."

Bartini, a lifelong fan of Carlin, said he believes that the comedian's sense of sentimentality would override his disdain for trivialities. He noted that some of Carlin's ashes were scattered near his childhood home at 519 W. 121st Street, and that Carlin set his short-lived sitcom, "The George Carlin Show," in Morningside Heights. As for Columbia, Carlin absorbed the campus' culture "like a sponge," Bartini said.

"He kept visiting [the neighborhood] until a month or two before his death," Bartini said. "He would not be who we know and love today had he grown up somewhere else."

"I don't think Carlin would even approve," he said. "But guess what? He's not here to protest."