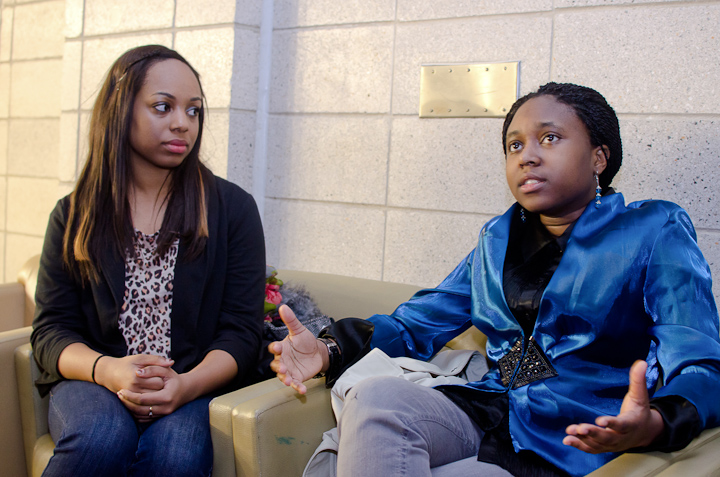 Dayo Osuntokun, CC 15, and Brianna Olamihu, CC 15, of Columbia Pre-Health SIC, one of the groups that won housing in the 113th Street former convent brownstones.

Meanwhile, Alpha Epsilon Pi and Pi Kappa Alpha, which lost their brownstones following a drug scandal in December 2010, were selected from a group of four finalists to live in two East Campus townhouses next year.

The selection committee, which consisted of six undergraduates and five administrators, made its recommendations after meeting Tuesday with Terry Martinez, dean of community development and multicultural affairs. Martinez then made the final decision.

Joshua Boggs, SEAS '15 and a member of the selection committee, said that Martinez's final choices were the same as the committee's recommendations.

"We all thought it was a fair decision, and we all came to this decision together," he said.

Chris Godshall, CC '15 and a selection committee member, said that interviews with the applicants were the most important factors in the decision.

"Having them speak to us was really the key to it," he said. "The process was very fair, very robust."

Engineering Student Council President Tim Qin, SEAS '13 and a member of the selection committee, said that he used his experience as a Resident Adviser to inform his recommendations on the committee. He said that he considered how the groups would interact with the rest of the residential community, and whether or not they would adhere to housing policies like noise levels.

"The committee thought about who would best utilize the space and give back in terms of the community," he said.

Leaders of the winning special interest groups said that the living spaces would help them achieve their respective missions and foster a greater sense of community.

Julian NoiseCat, CC '15 and treasurer of the Native American Council, said that NAC members are very happy about winning the SIC space—especially after being named a finalist for a 114th Street brownstone and ultimately not winning the space.

"We're excited to meet the other people," he said. "We already have a strong relationship with other groups on campus, but this will help us continue to build those and work toward that."

NoiseCat said that the new space, which will house 15 people, will allow the group to plan and hold bigger events.

Priom Ahmed, CC '14 and a co-chair of the Student Wellness Project, said that having a common living space will help the group to emphasize its goal. She said that the new space would encourage students not only to take care of themselves, but also to take a personal responsibility in others' wellness.

"We wanted to provide an inclusive, compassionate, and safe living space for students who might face pressure to engage in unhealthy or risky behaviors," Ahmed said.

Brianna Olamiju, CC '15 and recruitment coordinator for the Columbia Pre-Health SIC, said that she envisions the new space as a community where students going into all pre-medical fields can come together and support one another.

She said that the group is planning various events, such as peer-to-peer talk, at which upperclassmen can advise incoming first-years about the pre-health course of study at Columbia.

Dayo Osuntokun, CC '15 and president of Pre-Health SIC, said that she wants the community to change the general perception of the pre-health field as stress-inducing and tense.

"I want the image to move from being a competitive major to a more collaborative, more supportive community," she said. "When you live together, you can be there for each other."

Molly Karna SEAS '15 and a member of Creative Commons, said the group hopes to "foster creativity" and "bring people together within our residence, within Columbia, and with the Morningside area around us."

Living together will allow students to collaborate in a way that would not otherwise be possible, said Creative Commons member Malini Nambiar, SEAS '15.

"Living together is crucial," she said. "I always say shared space is shared values, and I think with this, that is really true. We want to foster creativity within our living space and outside of it."

AEPi and Pike, which unsuccessfully applied for their old brownstones last semester, will now have housing again for the first time in two years.

Boggs said that despite the controversy surrounding AEPi and Pike two years ago, they were the best fit for the spaces. He said he anticipated a negative response from the rest of the Columbia community, as well as angry comments on Bwog, "but we still believe that they were the best choices for the EC townhouses. We believe they had a big enough turnaround, new leadership, new members."

An earlier version of this article included an incorrect apostrophe in the title of Writers House, in accordance with the spelling on the Student Affair's website. Spectator regrets the error.