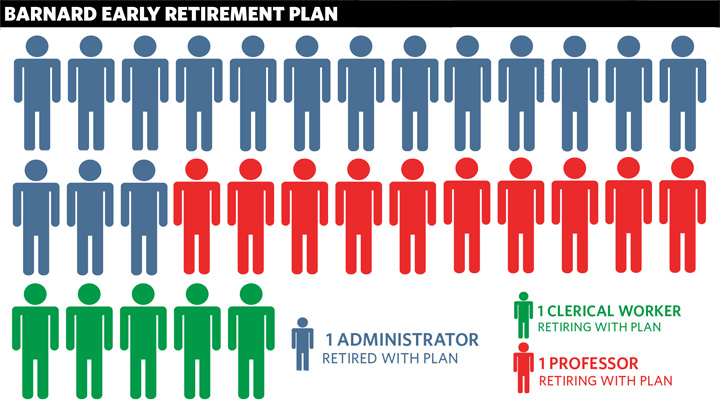 Ten Barnard professors and five clerical workers are retiring early as part of an administration plan to save money.

Barnard will save just under $700,000 in the long term as a result of the retirements, part of an effort to cut $8 million from the school's operating budget in order to eliminate a small but significant operating deficit and bring down annual tuition increases.

The faculty members who took the plan had been at Barnard for between 10 to 43 years. Their names were not made public in order to respect their privacy.

Beyond saving money, Chief Operating Officer Gregory Brown said in an email that the plan—which was accepted by 16 administrators last semester—was also an "opportunity to respond to several members of our community who had requested a voluntary retirement program."

Unlike the usual retirement plan, the early plan was offered to all eligible faculty members and did not let them bargain for benefits tailored to how many years they served. It will give retirees a full year of payment without teaching responsibilities.

Robert McCaughey, a history professor and former dean of Barnard faculty, said he wasn't sure if the plan would save money initially, but that the college didn't have many other areas to cut.

"If you pay an extra amount of money to bring about [the plan's] incentives, the amount of net gain is somewhat questioned," McCaughey said. "At the same time, the college is in a financial bind: if it just cut everything, you're eating into your future."

The voluntary retirement plan was also offered to employees as part of a recent agreement with Local 2110 of the United Autoworkers Union, which represents clerical employees at the college. Five union workers accepted the plan.

The year of pay after retirement was an important incentive, professors said.

"I'm sure that's why people who did take it, in part, took it," McCaughey said. But he added that for some people, the benefit could be "something of a perverse incentive—if you happen to like teaching, it has a different impact on you."

Despite the number of professors who selected the early retirement plan, the Barnard administration said that the academic rigor of the college will be upheld. Individuals were asked to choose retirement dates between June 2013 and June 2015, so "the effect of the change will be gradual," Brown said.

Art history professor Christopher Baswell said that because most of the professors retiring aren't in the middles of their careers, the plan would likely not harm the college's academic standing because effective new professors would be ready to step up.

Since 2008, Barnard has been asking its departments to shrink their budgets and eliminate costs.

"The bigger issue, from the point of view of the faculty, is replacing budget lines," Anne Higonnet, a professor of art history, said. "Every department has to very carefully justify any additions to the faculty. There are positions we wish were filled, but we understand that we have to move slowly."

"There's no money to provide any food at departmental meetings, there's no college support for coffee at the office," Baswell said. "These are tiny amounts of money, but that's where you notice it."

The question that the retirees had to face was, "if you're not going to do this, what are you going to do instead?" Baswell said. "If not this career, then what?"