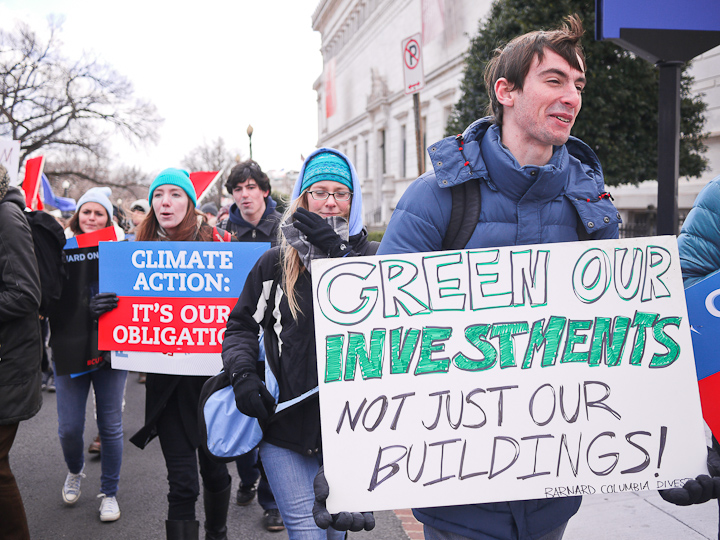 Among the 40,000 people rallying for action on the Keystone XL pipeline this weekend in Washington, D.C. was a group of Columbia and Barnard students who joined the call.

Almost 25 students from Columbia and Barnard traveled to Washington on Sunday to attend the rally, which was organized by 350.org, the Sierra Club, and the Hip Hop Caucus to lobby President Barack Obama, CC '83, to reject the construction of the pipeline.

Joe Shortsleeve, GS '14 and a member of Barnard Columbia Divest, said one of the speakers at the rally described the pipeline as "shoving a dirty needle into the arm of America."

BCD, which wants Columbia to divest its endowments from the fossil fuel industry, did not originally plan to send a group to the rally. But after individual members' plans generated interest, the group booked a bus with help from the Columbia-Barnard International Socialist Organization on Friday morning, and sold all 55 seats by Saturday night.

Once in Washington, Columbia students met activists and divestment chapters from other universities before the rally and march began.

"A lot of people were not people who you'd stereotypically think would be involved. There were a lot of families, and older adults, and just regular people," Daniela Lapidous, CC '16, said. "This is not a movement of radicals, it's a movement of everyday people who want protection for the environment."

"What I liked the best was how there were many Native American tribes there from both Canada and the U.S.," Ryan Elivo, CC '15 and a member of BCD, said. "These people were actually affected firsthand—they had accounts of how people in their tribe got cancer, had headaches and other symptoms because of the oil spills, so it was really heartbreaking."

After the rally ended, the crowd marched from the Washington Monument to the White House and back, chanting phrases such as "We are unstoppable, another world is possible" and "Can't eat money, can't drink oil, get this pipeline off our soil," BCD members said.

"The most exciting part was being in the street, hearing people yelling out chants that we'd made up, and hearing their chants," Shortsleeve said. "There was a lot of energy."

Now that the group has returned from Washington, BCD is working to raise awareness about its campaign to divest Columbia's endowment from fossil fuel companies.

"I think it really has energized us as a group," Lapidous said. "This showed we can pull together something tangible, and it showed that people do care."

BCD hosted a teach-in Tuesday night and will hold an open house at its regular meeting on Wednesday. The coalition is also planning a rally on Low Plaza for Friday at 2 p.m. Group members hope that these events, combined with the attention that the national rally received, will attract more attention from students and administrators.

BCD wrote a letter to administrators and sent the letter to University President Lee Bollinger's office, but so far the group has not received any response, Shortsleeve said.

"We would love to be talking to administrators, but so far there has been a very notable silence," he said.

In addition to holding a week of events, BCD members will attend a divestment conference at Swarthmore College this weekend, with more than 90 other schools. Shortsleeve and Lapidous said they agreed that larger events such as the rally and conference are energizing their movement.

"Things like the rally hopefully will help us move forward," Shortsleeve said. "This is our school, our endowment—this is our responsibility as students."