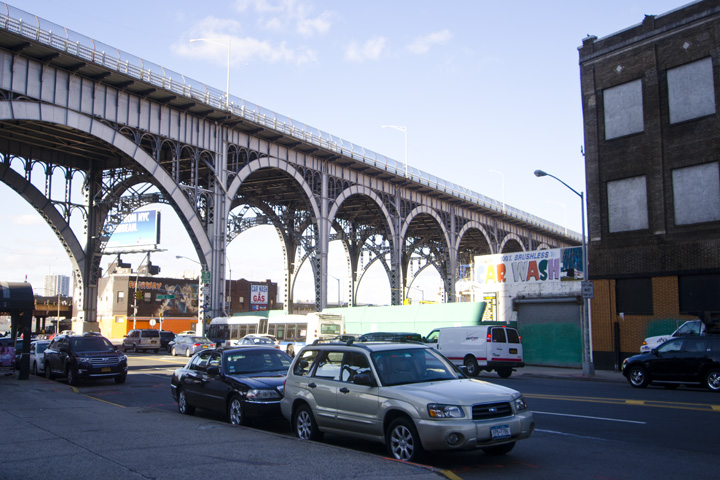 Clubs around 12th Avenue are beginning to see a sharp rise in business, in part due to Columbia's expansion.

When John Beatty relocated the Cotton Club to Manhattanville in 1977, he could have been making a serious mistake.

"When I moved over here, it was nothing. It was considered a boondocks," said Beatty, whose jazz club now sits on the corner of 125th Street and 12th Avenue.

Thirty-five years later, Beatty's club, now a fixture in the West Harlem jazz scene, is seeing more and more customers flood into what was once a depressed neighborhood on 12th Avenue.

The 12th Avenue corridor, with the iconic Riverside Drive viaduct looming above, has long been seen as unsafe and undesirable. For years, Fairway Market was the only major business on the corridor.

There are still rough edges. You can walk three blocks of uneven, dimly-lit sidewalks without encountering a store.

But the neighborhood is on the rise, business owners say—in part due to Columbia's expansion, which borders the avenue. As construction begins on the University's controversial campus in Manhattanville, Beatty is just one small-business owner who is reaping the economic benefits of the plan.

The area is "definitely on the upswing," said Beatty. Manhattanville is, "especially for me, an ideal location, because Columbia's building up all this over here," he added.

Although the Manhattanville expansion has come under fire from some for its use of eminent domain, many small-business owners in the area say the impending expansion has also brought with it more customers, more competition, and greater opportunity for economic growth.

Beatty pointed to the growing number of clubs and restaurants in the area—such as the newly re-opened Floridita and Dinosaur Bar-B-Que, which are across the street from the Cotton Club, as examples of the 12th Avenue corridor's thriving economic growth.

Ramon Diaz, whose locally famous Cuban restaurant Floridita was forced to relocate because of the campus expansion, said real estate on the corridor was in high demand. "I've been approached, I think, around five or six times, by people asking if I'm interested in selling the place," Diaz said.

Diaz was originally concerned that his new location would fail to attract customers to the same extent as his previous Broadway and 129th Street restaurant, he said, but the construction has brought him and other stores and restaurants in the area an entirely new customer base.

"The fact that construction has been going on across the street means we have between 100 and 200 construction workers coming here for breakfast and lunch every day," Diaz said. "And there are going to be more."

Garth Caruso, general manager of Dinosaur Bar-B-Que, said the area was conveniently located to bring in customers from surrounding neighborhoods, a trend that he predicted would prompt continued growth and competition for property in Manhattanville.

"We have a very diverse customer base, everything from the local community, to all the college students," Caruso said.

In fact, the owners said, business has even been coming from outside the area. Beatty estimated that almost 85 percent of his business comes from tourists in the city.

Perhaps the most visible symptom of the neighborhood's growth is a thriving night scene, which Diaz said was making him consider turning Floridita into a 24-hour-a-day spot.

Beatty agreed, saying that customers now walk the streets at night with a freedom he has not seen since he first arrived in the neighborhood.

"With all these clubs, there are people at all times of night walking up and down the street," he said. "It's very safe, and you don't have to worry about that kind of thing now."

"I think this area is a piece of gold," said Luca Valeriani, general manager of Covo Trattoria & Pizzeria, on 12th Avenue and 135th Street. "I am looking forward to seeing new businesses open up here."