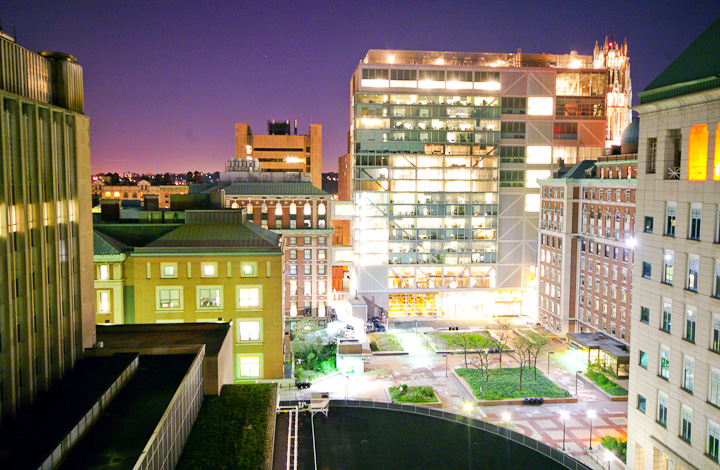 Preservationists say the architecture of Columbia's recent developments, such as the Northwest Corner building, detract from Morningside Heights.

A Community Board 9 resolution calling for a rezoning that would limit development in Morningside Heights is a victory for local preservationists who say Columbia is hurting the area's historic nature.

The proposal, which passed almost unanimously at the board's meeting two weeks ago, requests that the Department of City Planning conduct a study for contextual rezoning, between 110th and 125th streets and from Riverside Drive to Morningside Avenue.

According to the resolution, the rezoning would prevent the construction of new buildings "that do not reflect the unique historic character of the neighborhood's magnificent architecture."
"It would mean that new development would have to be contextual with existing historic development," CB9 member Brad Taylor said.

If the planning department goes forward with the rezoning, the city will enforce height or design requirements "more in keeping with the historic standards," Taylor said.

"The City Planning Commission would have to decide if they would like to undertake this study, so that's what has to happen next," he said. Rezoning would also require City Council approval.

Contextual rezoning resolutions have passed nearby in West Harlem and the Upper West Side, leaving Morningside Heights potentially subject to increased pressure for development, the resolution reads.

While local preservationists have advocated for a historic district for the neighborhood, which would require residents to get city approval for changes to building exteriors, the rezoning would be a separate effort.

"There's got to be a two-pronged effort," Taylor said. "The historic district is one, zoning is the other, because the rezoning will deal with sites that don't have historic structures on them but could be developed in the future in a way that would be out of scale with the historic buildings."

Preservationists said that a contextual rezoning would be a big step toward preserving the character of the neighborhood, and stopping what they said was out-of-context development by Columbia.

"Plans were set with a very reasoned approach with respect to introducing new construction into the historical context," said Gregory Dietrich, Morningside Heights Historic District Committee adviser and preservation consultant, referring to a 1998 planning study that the University released. "The idea that they would dismiss this altogether when actually confronted with new development is basically not in the best interest of community preservation, neighborhood preservation, or preserving neighborhood character."

Dietrich and other preservationists pointed to the Northwest Corner Building, on 120th Street and Broadway, as an example of a building that is outside the historic style of the community.

"Standing on the other side of the campus, I feel like it's an eyesore," MHHDC executive board member Betsy Cangelosi said. "It totally does not go with anything that you see in the viewpoint."

"This is not a building that makes any pretense of respecting campus or neighborhood context, but rather dominates its historic counterparts like an uninvited guest monopolizing any and all dinner party conversation," Dietrich said in a letter to Columbia Magazine published in 2010, when the building was under construction.

MHHDC members also said that the University has not been vigilant in preserving the historic buildings it owned. In 2010, it tore down several brownstones on 115th Street.

Columbia's "track record has not been preservation-friendly," Dietrich said.

A Columbia spokesperson did not return a request for comment Wednesday about the rezoning.

In an interview Tuesday, Senior Executive Vice President Robert Kasdin said that the University took its role as a historic steward seriously.

"Columbia is committed to responsible stewardship of all of its buildings, especially those with architectural importance," he said. The University "doesn't want to encumber itself or others with unnecessary regulation," he said, referring to the proposal for a historic district.

Preservationists said the University had improved its preservation efforts, notably in its preservation of the original façades of the new alumni center and the convent-turned-residence hall being renovated on 113th Street.

"The community would really like to engage them with respect to their future development plans, and really have an understanding and a dialogue with respect to the planning of these properties," Dietrich said, referring to Columbia's future building projects. "And really work towards a viable solution that can satisfy the programmatic objectives while also preserving the neighborhood character."