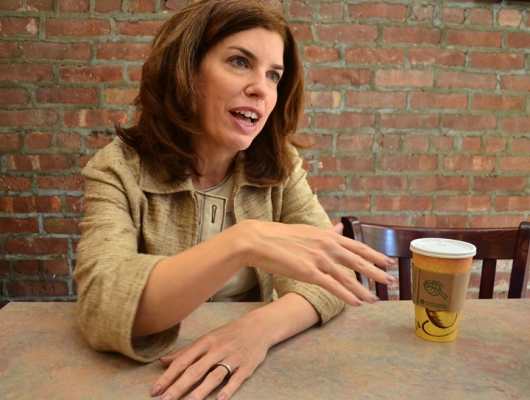 The four candidates for Manhattan borough president discussed their platforms with Upper West Siders at a meeting of the Three Parks Independent Democrats Wednesday evening, touching on local issues including a controversial plan to build market-rate housing in affordable housing projects.

While the four candidates, all Democrats, share similar policy positions, they outlined different areas of focus as well as a range of diverse experiences.

Brewer, who currently represents the Upper West Side, said her long-term track record in local politics makes her uniquely qualified for the job, adding that she would continue to support small business, work to prevent "mallization," increase availability of permanent affordable housing, bolster a commitment to recycling and environmental awareness, and emphasize access to quality education and senior care.

Brewer also said that given her political experience, she knows the effort required to make lasting changes.

"They do not happen overnight," Brewer said.

Menin said that 9/11 "turned my life upside down," adding that a key aspect of her role as CB1 chair involved helping downtown recover from the disaster. One of her most prominent actions was to pass a resolution supporting the planned Islamic mosque and cultural center a few blocks from Ground Zero.

Menin said that the most important issues for the next borough president to focus on are reforming the current land use process, combating school overcrowding and the ongoing shortage of affordable housing, and reducing obesity and hunger rates in the city—especially in East Harlem.

Jackson, who represents Morningside Heights, Hamilton Heights, and part of Washington Heights, cited his experience in education policy as a central asset in his campaign.

"Education was my salvation," he said, recalling what he called a life-changing moment when his high school track coach gave him a scholarship application.

Jackson cited his lawsuit against the state for its school funding distribution, an anti-hydrofracking resolution, and his role in securing funding for the Sugar Hill housing project and Boys & Girls club as his major accomplishments.

Lappin, who represents the Upper East Side, said that keeping Manhattan affordable for the middle class is a key concern of hers. She said being raised in New York City by a single mother devoted to advocacy influenced her decision to "dedicate my life to public service."

"I believe in the power of government to help people," she said.

Lappin pointed to her achievements on the council—including pushing through laws regulating crisis pregnancy centers, improving train safety, and introducing a textile recycling program—and to the opening of several public schools.

The forum, one of the first leading to the September primary, comes as the campaign is heating up.

Brewer, who signaled that she would run last year but only filed for the office in January and barely campaigned until earlier this month, is behind in fundraising and racing to catch up. According to returns filed Friday, she has only raised $48,000, compared to Jackson's $329,000, Lappin's $703,000, and Menin's $1,017,000.

Despite her fundraising disadvantage, the vote-rich Upper West Side will be a major prize in the race, potentially giving Brewer a boost.

"I think Gale's entering into the race changes the dynamic, because the West Side was up for grabs until she got in the game," State Democratic Committee member Daniel Marks Cohen, who attended the forum, said. "The question is whether she can make up for the lost time, because some of her opponents have been running for six months or a year."

"By the time voters are paying attention, hopefully she will be in a—at least in a stronger position than she is today," Cohen said.

Menin, who has been crisscrossing the borough campaigning for months, is notably ahead in fundraising and organization. She has received the lion's share of endorsements so far—even from some community leaders in Brewer, Jackson, and Lappin's home bases.

Meanwhile, Jackson's status as the only man in the race and the only person of color could give him a demographic advantage.

One of the most pressing issues discussed at the meeting was affordable housing, especially in light of the city housing authority's controversial plan to build market-rate housing in eight affordable housing complexes citywide. One of those complexes is the Upper West Side's Frederick Douglass Houses, just a few blocks away from where the candidate spoke to the Three Park Democrats.

The candidates all voiced concerns about the plan and the lack of resident input that went into the housing authority's plan. Brewer said residents and tenant leaders need legal aid for negotiations.

"These are very complicated negotiations," she said, adding that she hopes the plans would be "be changed dramatically."

Menin also objected to the proposed developments' potential encroachment on playground and park space at the developments, and developers' plans to place the entrances of the market-rate developments facing away from the affordable housing.

"What kind of message is that sending?" Menin asked.

Judy Wood, a Three Parks Democrats member who attended the forum, said she believes that Brewer is likely get the group's endorsement, given that "this neighborhood is very familiar" with and fond of her.