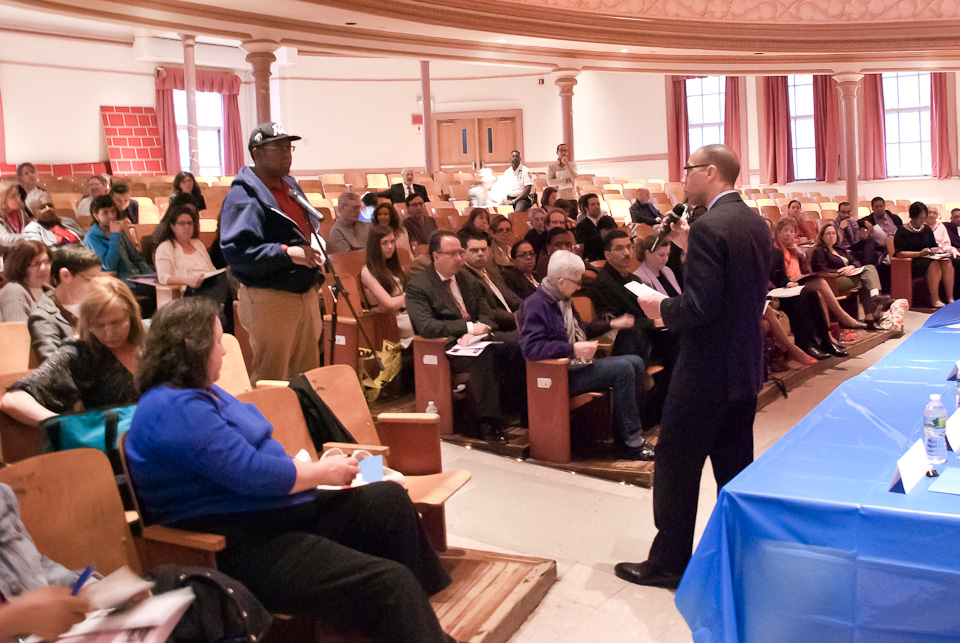 The meeting was held in the Wadleigh Educational Complex on 114th Street and Frederick Douglass Boulevard, a building that houses Wadleigh Secondary School for the Performing and Visual Arts, Frederick Douglass Academy II, and, as of this school year, a branch of the Success Academy charter school network.

Walcott defended the practice of co-location and the Success network.

"Our goal is to make sure students are getting an education, and a high-quality education, and Success has been successful in doing that," Walcott said. "I do not have a problem at all with Success growing because they've been able to produce results."

Multiple parents said they were concerned about the frequency of charter school co-locations with public schools in District 3, which includes the Upper West Side, Morningside Heights, and parts of Harlem.

Beth Servetar, Parent Teacher Association co-president at Booker T. Washington Middle School, said that District 3 is overburdened and has acted as a host to charter schools in both a "biological" and a social sense.

Wadleigh teacher Anthony Klug said that co-locating his school with the Success branch had caused problems for Wadleigh, including crowded hallways and the loss of a dedicated science laboratory.

"What reassurance can we have with you that our students receive more, and not less, help that they need for our school to improve?" Klug asked, adding that the Success branch, which occupies the building's fifth floor, has had all of its classrooms remodeled.

But Walcott said that Success Academy schools' test scores reflect their value to the community.

"Success has results that benefit the students," he said.

Walcott said that the law mandates a "dollar-for-dollar" improvement scheme in which charter schools and public schools in the same building receive the same amount in capital investments. However, the way this money is used can differ from school to school, Walcott added.

While Servetar said she was grateful that Walcott and several staff members chose to come to District 3, she wished he had given more specific answers, adding that he had a tendency to address issues in broad sweeps.

Servetar added that the DOE would be "disingenuous" to claim that it had chosen charter school sites thoughtfully, given that several schools were experiencing space crunches following co-location.

"We've borne the burden for a long time," Servetar said.

Marisa Maack, chair of Community Board 7's Youth, Education and Libraries Committee, agreed that District 3 has had a disproportionate number of co-locations. She said she felt that Success Academy has so many branches in District 3 because the organization got its start in the neighborhood.

"This is where they began," Maack said, adding that Success Academy "focused its strategy on Harlem" in its early years.

She added that the issues raised at the town hall were mainly old or ongoing ones.

"I didn't hear a lot of new information," Maack said.

Also at the meeting, principals of both Wadleigh and Frederick Douglass II said their respective schools had made major strides after being slated for closure last year and subsequently spared.

Frederick Douglass II principal Osei Owusu-Afriyie noted that the school received an A in its last progress report, a measure indicative of the "great work that we're doing."

Wadleigh principal Tyee Chin also said that his school has "made some significant changes," including new leadership, and is overall moving in a "very positive direction," noting that the school has also seen an 80 percent decrease in suspensions.