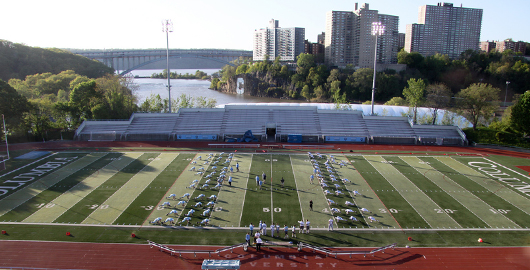 A Columbia football player has been charged with a hate crime.

Updated, Thursday, 3:05 p.m. For the latest updates (including administrator and student responses and petitions), see Spectrum.

Police charged a Columbia football player with aggravated harassment on Tuesday after he allegedly assaulted and threatened another student with racial slurs.

According to NBC New York, the victim was a 19-year-old Asian student, who reported that as he was leaving a dormitory on W. 113th Street with two female friends, the suspect, Chad Washington, CC '15, heckled the women.

After the victim tried to defend his friends, Washington followed him and called him racial slurs. He then shoved him against a wall, NBC reported.

Washington lives in McBain Hall, according to the Columbia directory. In an op-ed for Spectator this semester, he argued that student-athletes deserve more respect than they are given on campus.

Washington was arrested Tuesday at 5:30 p.m. and his next court appearance is scheduled for July 8. He appeared in prearraignment court on Wednesday and was released without bail.

A Columbia spokesperson said in a statement Tuesday that administrators could not comment on the incident or the arrest.

Daniel Fetterman, Washington's attorney, said in a statement that Washington "was involved in an incident with another student early Sunday morning" and called him "a highly regarded student and athlete."

"The allegations do not accurately portray the events that occurred," he said. "When all the facts come out, it will be clear that Mr. Washington did not commit a hate crime, and he will be vindicated."

Fetterman also said that Washington is not being charged with a felony, as NBC reported, but with a misdemeanor.

After news of the incident spread on campus on Wednesday, WKCR compiled a set of 46 tweets made by Washington and several of his teammates that contained racist, homophobic, or otherwise offensive content. Hundreds of commenters on Spectator and Bwog condemned the langauge used in the tweets.

Although the tweets themselves were unrelated to Washington's arrest, they raised questions about whether the culture of the football team made it acceptable for the players to tweet what they did and whether Athletics administrators and coaches were aware of the tweets. WKCR noted it had found the accounts in part because the official Columbia Lions Twitter account followed those players.

Washington himself manned the @ColumbiaLionsFB account last Wednesday for the team's first-ever "#WingmanWednesday." He tweeted shout-outs to his teammates using their Twitter handles, including some of those whose offensive tweets made WKCR's list.

In a joint statement released on Thursday, Athletic Director Dianne Murphy and football head coach Pete Mangurian said that they would address the individuals responsible for the offensive tweets and speak with each of the 31 varsity teams.

"This is disheartening and embarrassing for everyone involved," the statement read. "We are working closely with our campus partners to make sure that we are diligent and proactive in our response to this matter."

Murphy and Mangurian stressed that the tweets did not reflect the athletic community as a whole and added that "personal expressions of racism, sexism, homophobia, anti-Semitism and any other form of bigotry are abhorrent."

A group of student leaders met with Associate Dean of Multicultural Affairs Melinda Aquino on Wednesday to discuss how the University should respond.

Student Wellness Project founder Wilfred Chan, CC '13, said on Facebook that, while administrators were drafting a statement, Aquino "acknowledged that it is a difficult statement to craft because of the ongoing nature of the investigation." Chan was joined by Student Governing Board chair Abdul Hanif, CC '14, former SGB chair David Fine, CC '13, and outgoing Engineering Student Council president Tim Qin, SEAS '13, in the meeting.

Aquino told the students that the victim declined to issue a community-wide email notification of the incident and that administrators honored the request.

On Thursday, administrators sent a statement to students in response to the alleged hate crime and the offensive tweets. The statement was co-signed by Columbia College Dean James Valentini, School of Engineering and Applied Science Interim Dean Donald Goldfarb, School of General Studies Dean Peter Awn, and Murphy.

"For all members of Columbia University, harassment, mistreatment and hateful language based on race, gender, sexual orientation, affiliation or other identities are unacceptable and hurt every one of us," the statement read. "We all are committed to a campus environment which values and supports each individual in an atmosphere that is caring and respectful."

The statement also said that administrators are "aggressively" addressing the offensive tweets with the individuals involved.

"With respect to social media messages reportedly posted by some students, we share fully in the belief that offensive messages in any form are unacceptable and fall far beneath the standards of civility and mutual respect we expect of all our students, including student athletes who represent Columbia," the statement read. "We are addressing this matter aggressively with the individuals involved. We also believe that broad generalizations about any group are unfair and hurtful, and we unfortunately have seen that social media has too often become a forum for such offensive comments."