Voters head to the polls in city primaries

Voters head to the polls in city primaries 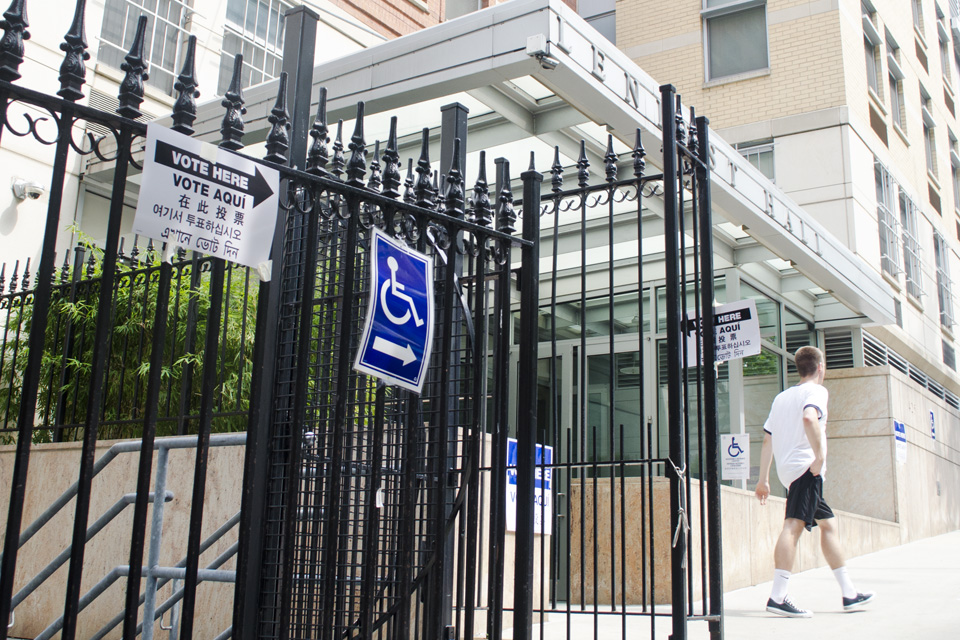 At Columbias main polling place, in Lenfest Hall on 121st Street between Amsterdam Avenue and Morningside Drive, turnout was slow for most of the morning.

Follow our election night liveblog for up-to-the-minute results and updates.

Voters across New York City went to the polls Tuesday to cast their ballots in local primary elections, as the candidates made last-minute pitches at polling places around Morningside Heights and West Harlem.

At Columbia's main polling place, in Lenfest Hall on 121st Street between Amsterdam Avenue and Morningside Drive, turnout was slow for most of the morning.

Several Democratic primary voters said they were voting for the candidates they considered the most progressive.

"The whole time we thought Bill de Blasio's politics were better, but our reservation was that we just weren't sure what he could actually do, how much he could actually get done," said John Thoma, who ended up voting for de Blasio for mayor, as did his wife Judy. De Blasio has led in recent polls, and would avoid a runoff by capturing 40 percent of the vote.

David Jensen said he had voted for de Blasio, as well as former governor Eliot Spitzer for comptroller.

At P.S. 165 on 109th Street between Broadway and Amsterdam Avenue, volunteers were politicking for their preferred candidates. There was a steady stream of voters going into the school, one of the largest polling places in the city.

Public Advocate candidate Reshma Saujani stopped by the school to talk to voters.

"I think people are excited—they are responding to our message about empowerment, and women and girls, and about education," she said, adding that she planned to vote later in the day "with my puppy and my husband and my dad."

State Assembly member Daniel O'Donnell, who isn't up for re-election until 2014, also made an appearance at P.S. 165. He said he planned to vote for City Council Speaker Christine Quinn, who is fighting to make the runoff after losing an early lead in the polls.

O'Donnell said he still hadn't decided who to vote for in the District 7 City Council race, and that he wouldn't be voting until "around 8:45 p.m.," 15 minutes before the polls close.

Voters at Wadleigh said they liked using the old-fashioned lever voting machines—which the Board of Elections brought back for this primary—instead of the newer touch machines.

While some voters across the city have reported problems with the lever machines, Saunders and other local voters said they had no issues.

"It's more of a protest vote," she said, adding that incumbent Inez Dickens is "too old-school in the way she works."

Norton Miles, on the other hand, called Dickens' incumbency a strength.

"She's got the experience from having been there and knowing how it works," Miles, who voted for Dickens, said.

Meanwhile, at P.S. 163 on 97th Street between Amsterdam and Columbus avenues, colorful campaign posters were plastered on trees, stand-up signs, and lampposts. About a dozen volunteers and campaign workers handed out literature.

District 7 City Council candidate Joyce Johnson flagged down voters heading into the school, introducing herself as their neighbor.

"I'm feeling good," she said, adding that her get out the vote strategy included "being charming, saying hi to voters."

"I think my message really resonates," she said.

Polls close at 9 p.m. Check back for live updates on all of the major races.