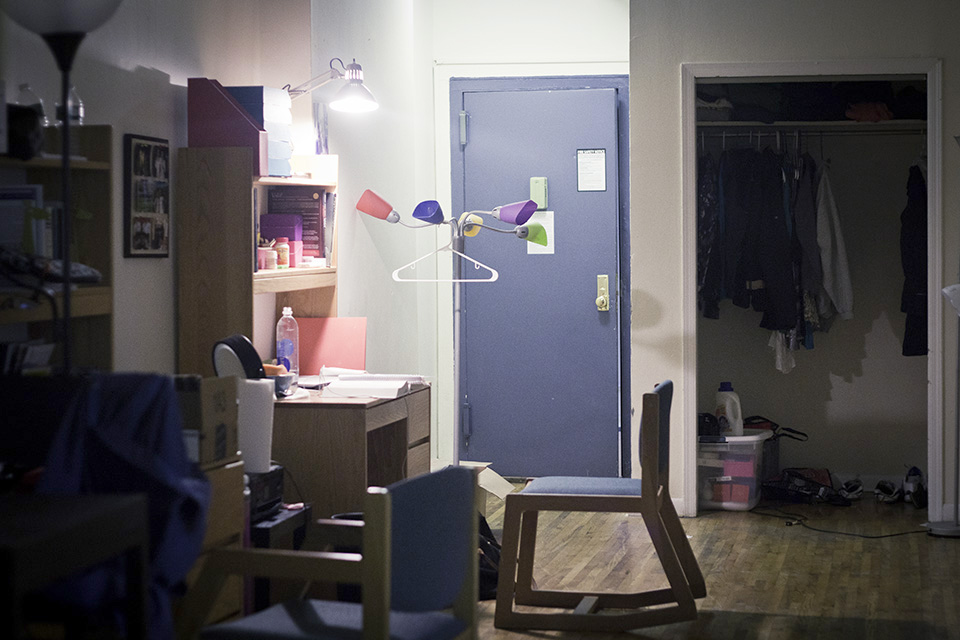 A baseball party that took place last semester in this suite in the former Zeta Beta Tau brownstonenow home to transfer and summer housing waitlist studentsled to the fraternity losing its brownstone, alumni said.

It was around 11 p.m. on a Friday night last fall. The field hockey team was welcoming its new first-year players with an annual tradition: a fraternity crawl. The last stop of the night was Zeta Beta Tau.

So goes the story that, for many months now, has been told in whispered rumors and angry comments on Spectator and Bwog articles. Ever since the InterGreek Judicial Board handed down its decision to revoke ZBT's charter last January, causing a storm of controversy surrounding an unspecified hazing incident, Columbia's student body has been demanding answers.

After ZBT appealed its sanctions to then-Dean of Student Affairs Kevin Shollenberger and the dean reversed the judicial board's decision, the fraternity eventually still lost its brownstone after violating the terms of its action plan and social probation.

Although the immediate cause of the chapter's eviction is well-known and was widely reported, administrators still would not discuss the rest of the details surrounding the discipline process and the initial hazing.

Now, multiple ZBT alumni have confirmed what students have long suspected. ZBT was not put on probation for hazing its own pledges, and was not alone among the Columbia fraternities in its involvement with the new women on the field hockey team. From the view of the chapter's alumni, the brothers simply allowed the wrong actions to happen in their house at the wrong time.

What happened that night

"The women's field hockey team had one of their annual rituals, which was typically that they have new freshman members, they have a day of carousing and heavy drinking and then make visits to the fraternities," one ZBT alumnus, who has been a close supporter of the current chapter, said. "There were emails exchanged between the team and ZBT, and there were some members of ZBT present when the girls showed up."

This alumnus asked not to be named to preserve his relationship with the fraternity and with Columbia.

The women on the field hockey team instructed the ZBT brothers to ask the first-year women five questions.

"Three were innocuous and two inappropriate," the alumnus said. "Things like, 'What's your favorite sex position?' and 'Do you swallow?'"

At this point, according to alumni, the evening took a turn for the worse.

"One unnecessary thing happened. One of the guys in ZBT, he threw water on [a girl] for some unknown reason, and she began to cry," John Prudden, CC '78 and another ZBT alumnus, said. "All the other guys shouted at him and threw him out."

Prudden has been in touch with other alumni close to the current chapter's situation.

The noise attracted some neighbors' attention, and a noise complaint was filed. Like many Greek organizations at Columbia, ZBT was already on social probation due to previous noise complaints, all from the same neighbor.

When the University received this noise complaint, it investigated, which led to administrators finding out what had occurred in the house, the alumni said.

According to the alumni, members of the field hockey team were put on probation and at least one member of the fraternity received disciplinary action for throwing the cup of water.

"Everybody was gagged by the University so they can't talk about what happened. Don't know if that was to protect the athletic teams or what," the first alumnus said.

Student Affairs administrators and Columbia's athletics department both declined to comment for this article, saying that as a matter of policy, they do not comment on disciplinary actions.

"Whether you judge this incident as a 10 on the Richter scale or a two, there are policies in the NCAA rulebook where other schools might have taken action," the alumnus said. "Teams would have been suspended or coaches fired."

The National Collegiate Athletic Association does not have any official rules against hazing, but many other schools have suspended teams in the past few years for allowing hazing, including the Middlebury swim team and the Cornell lacrosse team. Cornell publicly releases details about all hazing incidents, one of the more transparent policies among the Ivy League. The Franklin & Marshall College women's lacrosse coach was fired in April 2012 over a hazing incident.

In January, ZBT's case came before the InterGreek Judicial Board, which would recommend that the University revoke the fraternity's charter and brownstone, located on 115th Street between Broadway and Riverside Drive.

"Whatever ZBT did, every other frat did. All these guys on the InterGreek thing, they do this," Prudden said, referring to the hazing incident. "So ZBT is now a hazing frat, which is a joke."

The alumni raised concerns about several aspects of the hearing process, including the objectivity of the judicial board members and the administrators involved.

"There was no adult supervision. [Then-Dean of Community Development Terry] Martinez was not at that meeting. [Then-Associate Director for Fraternity & Sorority Life] Victoria Lopez-Herrera was not there—she sent an assistant, I believe," the first alumnus said. "I have questions about the board's impartiality and judgment."

The alumni did not take the judicial board's decision lightly. They both described heavy alumni involvement in the creation of ZBT's action plan that convinced Shollenberger to accept the fraternity's appeal.

Some of the chapter's prominent alumni petitioned Shollenberger to reverse the decision, the alumni said.

Shollenberger, now the vice provost for student affairs at Johns Hopkins, declined to comment for this article, saying that due to the material's disciplinary nature, he was "not going to comment on the specifics or the reasons behind the decision."

In response to questions regarding alumni involvement in the appeal process, Columbia Student Affairs spokesperson Alycen Ashburn said University policy prohibited her from saying more about disciplinary cases than the office has previously disclosed.

"Regarding the role of the ZBT alumni, they were not involved in the disciplinary process, although they did communicate their views to then Dean Shollenberger. Shollenberger also met with the alumni chapter advisors to ensure there would be adequate support for the organization as they carried out their action plan," Ashburn said in an email.

Shollenberger did overturn the Greek Judicial Board's decision, allowing ZBT to retain its housing and charter, pending the completion of the action plan.

"That was going very well, but that plan was absolutely zero tolerance. If there was a normal frat, it would be very hard to comply with that plan," the first alumnus said. He emphasized that the plan was designed to help the chapter take a "leadership position as a model of university behavior, it went above and beyond what was specified in ALPHA Standards."

As part of the chapter's action plan, the fraternity underwent an internal membership review, the alumni said.

"They conducted interviews with members to see if their values matched with those of Columbia and of the fraternity," the first alumnus said. Several members were expelled from the chapter, but because it took place in late April, and "it would have been unfair to throw the individuals out on the street," administrators allowed them to remain in the house until the end of the year so as not to disrupt finals or graduation—a decision that would eventually cost ZBT its house.

"The final straw was the party after the baseball team won the championship," the first alumnus said.

Both alumni described it as a spontaneous event. Many alumni had come to Columbia to see the baseball team, which makes up a large portion of the fraternity, play in the Ivy League Championship. The team won the title over Dartmouth, and to celebrate, several alumni purchased kegs of beer, which were delivered to the fraternity's brownstone.

"The new leadership of ZBT was not in the house" when the kegs arrived, the first alumnus said. "They learned on the bus back from the game that there would be a party and it was too late, they said be careful."

The party largely took place in one room of the brownstone, the alumni said. The bedroom belonged to two then-seniors, both members of the baseball team, and both of whom had been kicked out of the fraternity after the internal membership review.

No noise complaint was filed during the party, according to the alumni. It was long after the party, after finals, after graduation, and after the brothers had moved out of the brownstone for the summer, that University maintenance found the kegs leftover from the party in the back of a closet. Once administrators found out, they determined that the fraternity had violated the terms of its "zero-tolerance" action plan.

"These two guys graduated, had nothing to lose, and were kicked out of the chapter, and ZBT takes the fall," the first alumnus said. "The baseball team has no culpability, the very guys who destroyed this chapter with its 100-year history. That's the thing that hurts my feelings the most, is the dishonor to all the people who built this chapter."

The alumni expressed regret over how the situation played out and annoyance at the way in which the University handled disciplinary measures.

"Columbia was never in the mommying business. Nobody cared whether you drank beer or smoked pot," Prudden said. "When you're in college, you're given a great deal of freedom. This is the time you get to work stuff out, this is your four years to do it. What are we teaching these kids, holy mother, it's like a prison. I'm not used to Columbia telling me what to do on my own free time."

Despite the frustration, both alumni and students say they are ready to move forward.

"The alumni were very disappointed about this whole series of events. We were disappointed on a lot of levels. But alumni continue to want to make it work," the first alumnus said.

"ZBT is committed to hazing prevention on campus, and that's why we are working with all the faculty whole-heartedly," he said in an interview last month.

Morton declined to address the details of the hazing situation, but said the chapter plans to rebuild. They will continue holding events this semester, although perhaps more-so off campus, he said.

"We kind of see it as an opportunity. We're really excited about—basically we have this malleable clan on our hands, we can turn the fraternity into anything we want," Morton said. "What we want to focus on, well we're still having meetings about that, but we're really re-inventing ourselves, so to speak."

For the alumni's part, they hope that getting the fraternity's story out in the open will allow people to "get right in and express their thoughts on whether what happened to ZBT is fair."