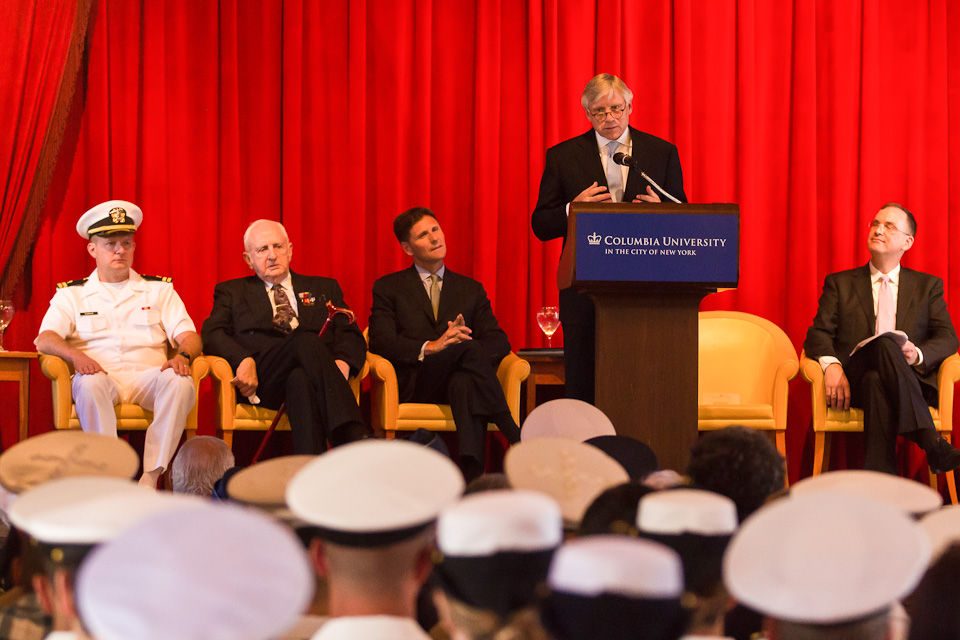 One year after quietly moving back onto campus, the Naval Reserve Officers Training Corps celebrated its return to Columbia with fanfare on Monday.

University President Lee Bollinger and Juan Garcia III, assistant secretary of the Navy, officially welcomed the program back after its 44-year ban.

While the NROTC program has been back on campus since last fall, students are still learning that the program exists. Most students don't know about its small office in Lerner Hall, and the current class of midshipmen—comprised of only five students—does not often stand out as a unit on campus.

The decision to reinstate NROTC at Columbia came in 2011 after the repeal of the highly controversial "don't ask, don't tell" policy.

"It was, of course, a great moment in society when that difference was eliminated," Bollinger said in his remarks Monday.

At the event, hosted at the Italian Academy, Bollinger touched on the controversy surrounding the NROTC return, but ultimately expressed his support for the program.

"There is no good reason why our great academic institutions should not offer it," he said. "Columbia has a historic, very close relationship with the armed forces."

Despite the controversy surrounding NROTC's return to campus, the midshipmen, said they have transitioned relatively smoothly.

"It hasn't been awkward at all. Most people don't know anything about ROTC being back on campus," midshipman Christian Vivadelli, CC '16, said.

Getting involved on campus and making friends has helped the midshipmen find their place at Columbia.

Still, for Kelsey Lynch, BC '17, the process hasn't been without its challenges. Barnard didn't have an established NROTC program, and Lynch had to push her way in, she said.

Then there's the weekly awkwardness of her chemistry lab. Lynch, like all midshipmen, wears her khakis to class on Wednesdays.

"I get stared at a lot. They're not used to it," she said. But she said her uniform also helps her make connections. "It brings up conversations with people who have been in the military before," she said.

The social aspect is only one challenge facing Columbia's midshipmen. On top of rigorous course loads, these students commute to the Bronx for training sessions with SUNY Maritime and have regular workouts.

"It's really difficult," Annalise Mariottini, CC '17, said of her workload. "Getting sleep is hard."

"I schedule naps and eating times in," Lynch said. "But it's manageable. We're both still alive."

Despite the past controversy and the occasionally challenging situations, the current trainees feel that being a part of the program has enhanced their Columbia experience.

The NROTC program is "definitely a family. Everyone kind of sticks together," Lynch said.