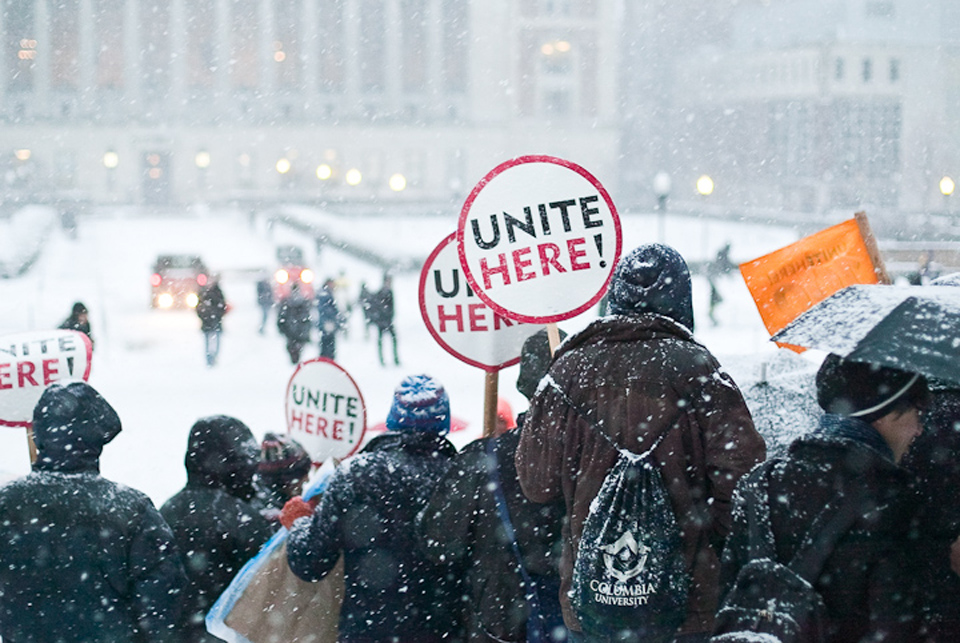 Despite the renovations made in John Jay Dining Hall over the summer, kitchen staff say that temperatures in the serving areas and in the kitchen can still reach up to 115 degrees—and students have taken up the cause to improve these conditions.

On Tuesday, members of Student Worker Solidarity submitted a petition with over 1,100 signatures to Vicki Dunn, executive director of dining services, calling for the installation of more effective ventilation in the working areas of the dining hall.

Workers in John Jay said that complaints made to managers and administrators have largely been ignored.

In a statement addressed to the members of SWS, Scott Wright, vice president of campus services, said that Dining shares the group's concern for the staff at John Jay.

"Dining is fully committed to operating a safe work place in accordance with all relevant standards," he said.

Wright cited the renovations made over the summer as an example of dining services' efforts to solve the problem.

"We are currently monitoring air quality and are already examining long term solutions for improved ventilation. I am available to meet with interested members of the student body to further discuss these issues and ongoing initiatives in John Jay Dining Hall," Wright said.

SWS said that it appreciated Wright's prompt reply, but it said that it wishes that the "speed would be applied to the actual issue at hand-worker safety. While students have recently raised attention to this issue, workers themselves have sought to rectify this situation for decades."

Over the summer, Dining installed a new dishwasher, replaced the flooring in service areas, and removed walls to free up space. Two new vents were also installed above the serving stations, but workers said that this has barely made a difference.

"I find it a little hard to believe," Katie Kester, CC '17, said. "It just seems like poor planning on their part, not to put the ventilation as a priority."

One worker in John Jay, who was granted anonymity to protect his job, said that the conditions are the worst at the beginning of the school year. When outside temperatures are 90 degrees or above, he said, the inside temperatures are often at least 110 degrees in the kitchen and serving areas.

According to the Occupational Safety and Health Administration, those working in temperatures of 103 to 115 degrees are at a high risk of heat-related illnesses like heat stroke, heat exhaustion, and fatigue. OSHA stipulates that while it does not have specific standards for working conditions in hot environments, "employers have a duty to protect workers from recognized serious hazards in the workplace, including heat-related hazards."

"It's extremely hot and hazardous," the worker said. "I'm thirsty a lot. Basically, what I'm wearing now, it just gets soaking wet with sweat."

He said that at the beginning of the school year, a lot of employees don't come in to work because they know the heat inside will be unbearable.

"You can't expect anybody to work under these conditions," he said. "It's actually cooler outside than it is here."

But George Joseph, CC '16 and a member of SWS, said that Dunn has been flip-flopping over the cost of the installation. According to the worker who asked about the air conditioner, Dunn replied that the installation would cost about $4 million.

Joseph, however, said that Dunn told him and other SWS members that it would cost $7 million. He said that both figures do not seem to be legitimate amounts.

Workers said that even the small changes they propose to help them cope with the heat are rejected.

According to one worker, there was an argument a few weeks ago over the long-sleeved, button-down uniforms that all workers have to wear in the serving areas. Employees said that the uniform material is not breathable enough in the summer heat.

Even though the only change was the length of the sleeves, employees said that this has made a big difference.

Students who signed the recent petition agree that John Jay workers should have better working conditions.

Danting Liu, CC '17, said she was shocked to hear about the high temperatures in the kitchen.

"It's basically just inhumane," she said. "The working conditions just affects their overall mentality. If they're not happy working, it really just decreases the environment here."

Kester agreed with Liu's concerns and said that these conditions spark greater tensions between workers and the Columbia administration. She said, "If the workers aren't feeling supported, that doesn't contribute to the sense of community here."

"The best-case scenario would be that workers across campus get to work in comfort for living wages and without a fear of administrative reprisal for speaking out for their rights," Joseph said.