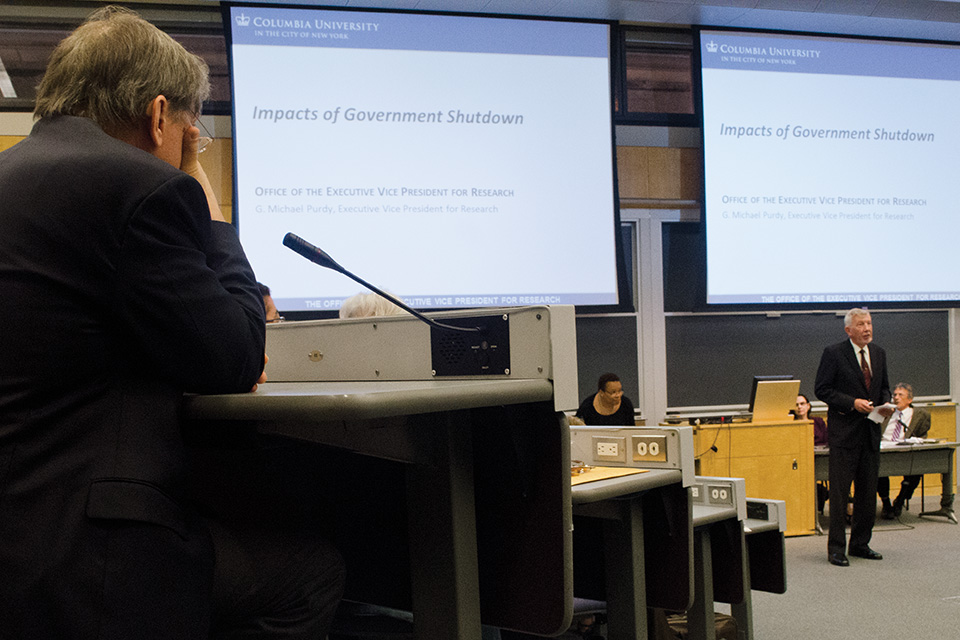 "While it is something of a major concern to us, in the short term, it's not a catastrophe," Executive Vice President for Research G. Michael Purdy told members of the University Senate on Friday, referring to the government shutdown.

The ongoing federal government shutdown could be detrimental to Columbia if it lasts a significant amount of time, a top administrator told the University Senate on Friday.

At Friday's senate plenary, the first of the semester, Executive Vice President for Research G. Michael Purdy said that the immediate consequences of the shutdown won't be serious. But if the shutdown starts to drag on, it could hurt Columbia researchers who depend on government funding—particularly if it affects other crucial budget debates in Congress, including the impending vote on whether to raise the debt ceiling.

"While it is something of a major concern to us, in the short term, it's not a catastrophe," Purdy said. "That is simply because the funding that we've received from researchers comes in almost exclusively in two-year or three-year-long grants or contracts, and those funds are already in-house."

Purdy said that Columbia currently has more than 3,000 research grants or contracts from various government organizations, including the National Institutes of Health and the National Science Foundation.

In addition to endangering research funding, the shutdown has caused the cancellation of peer review councils and the postponement of deadlines for proposal submissions. Once the shutdown ends, it could take time for these processes to be re-established.

Maxine Griffith, executive vice president for government and community affairs, said that the shutdown is likely to cause delays in the awarding and processing of grants later in the year.

"Slowdowns resulting from the backlog could be felt for months," she said.

Both Purdy and Griffith said that the debt ceiling debate and later congressional negotiations over the 2014 budget could have more significant impacts on long-term funding trends. They noted that a quarter of Columbia's research funding comes from federal grants and contracts.

"It's not the solution to everything," Purdy said. "We've still got to negotiate the 2014 budget, and there's tremendous uncertainty."

Griffith added that should Congress fail to raise the debt ceiling, there could be serious consequences on federal financial aid for students.

Though no plan was presented at the plenary to confront the possible financial issues that could arise if the shutdown doesn't end soon, Purdy and Griffith said that they plan to provide updates once they've received them from consultants in Washington, D.C.

In addition to the shutdown discussion, mechanical engineering professor Jeffrey Kysar updated senators on the Naval Reserve Officers Training Corps, which celebrated its return to Columbia on Monday. Kysar is the chair of a committee overseeing the academic implementation of NROTC.

The program, which returned to campus two years ago after a University Senate vote, now has five students enrolled. The Navy is hoping to increase enrollment by doing outreach across Columbia's undergraduate and graduate schools.

Other orders of business at the plenary included the introduction of new senators and an update from the smoking task force, which will come up with an implementation plan for the limited ban approved by the senate last semester by July 2014.