A Q&A with head of facilities: Retail space, academic programs, marshes, and McDonalds

A Q&A with head of facilities: Retail space, academic programs, marshes, and McDonalds 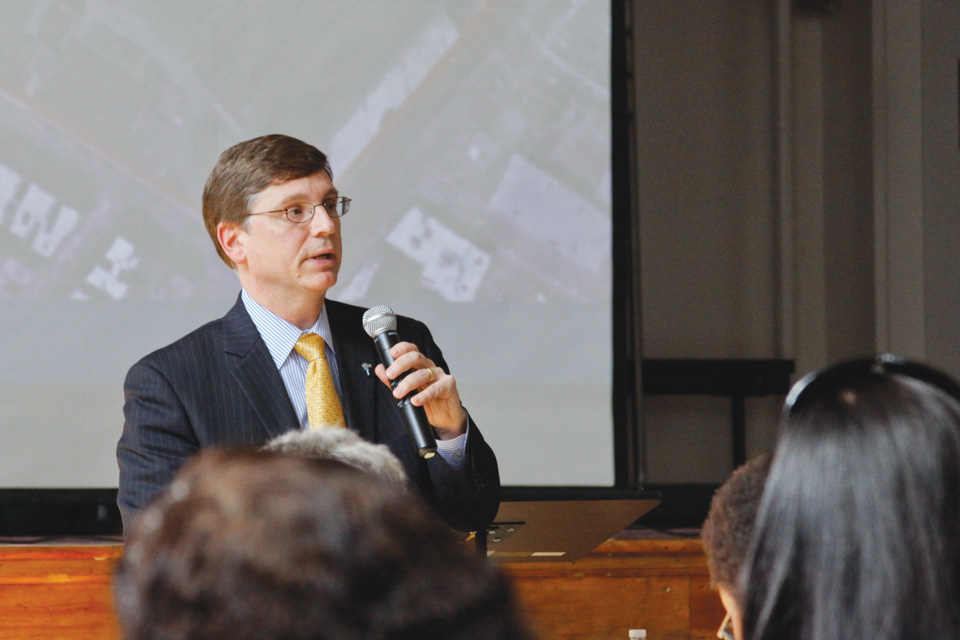 Spectator sat down on Friday with Joe Ienuso, the executive vice president of facilities, to talk about Manhattanville construction progress, the University's retail corridor, new academic centers, and a host of other issues. For more on Manhattanville, see this article. Here are some of the other updates Ienuso shared.

Q. Has there been any progress in finding a new tenant for the former Card-O-Mat space on Broadway between 112th and 113th streets?

We have a new tenant identified. Construction hasn't begun yet—there are still some details being worked out, which means I can't really give you a scoop on who it will be. I have a sense that we'll all be very delighted.

The bigger issue, as you know because you walk the corridor all the time, is that we don't typically have vacant space in this corridor, and when we do, it's not vacant for very long. That's because it's really a very, very vibrant retail corridor. The University has a lot of property, a lot of that retail is in the base of our residential buildings, and it's a really desirable location.

When we look for an occupant to fill a vacancy, we look within the mix of possible uses, so that we're constantly adding to the variety and the diversity for all of us to benefit from and to complement the choices that are within that corridor.

Q. So will the new tenant be something unique in this retail corridor?

Yeah, absolutely, absolutely. I think we're all going to be quite pleased. It's never over until it's over, but continuing on a positive course, it will probably be open in the spring or summer.

Q. Any progress on the Origin Science Theory Center, which the physics department is building in Pupin Hall?

It's underway. It was a big idea of the physics department to create some socially interactive space that would allow researchers to come together in different ways and literally bump into each other, launch some really good ideas. When we consolidated libraries in Pupin into the Northwest Corner Building, it created an opportunity to think about how the space in Pupin could be used. We're finished with design, and we're moving on with construction on that space. The target, I think, is the end of 2014.

Q. How about the Brown Institute for Media Innovation at the Journalism School?

It's currently under construction. The whole space has been gutted completely. It's quite a nice space, but the new concept for the space was so different from what was there, it really necessitated stripping everything down and doing a gut renovation. It was a warren of small offices in there. This is completely different.

The director for the program is here already as well, Mark Hansen. Mark is now very involved in the project. By the end of 2014, we should be done.

Q. How is the new public park and marsh near Baker Field coming?

The marsh is done. It's going to be called Muscota Marsh, a reference back to indigenous life in upper Manhattan. We're just working on a couple of final details with the New York City parks department, because it is and will operate as parks space. The University will maintain it.

It's exquisite. And it held up incredibly well last year at this time during Hurricane Sandy. The area was inundated with water. We had about 4 feet of water in Remmer, the boathouse, and the water came up at least a third to almost the halfway point of the new pathway in the park. The marsh held up very, very well, so we were all encouraged by that.

Q. Do you think building marshes is the future of waterfront park design in New York, as we experience more storms like Sandy due to climate change?

When we started to think about the park, we wanted to think about what type of environmental contribution the park could make. No one was thinking about a Hurricane Sandy-like event. What we were thinking about was, can we restore some wetlands, most of which has been evaporated away over the course of time, and how can we take advantage of the unique geographic conditions there.

We did that with Field Operations, which worked on the High Line. The park takes advantage of topology, the waterfront, the fact that we're in the inlet on a mud flat. In a heavy rain condition, you pick up a lot of debris from the street, including petroleum product, and we direct some of that water to the sea grasses there. It will really filter the water before it goes back to the river.

So it's pretty, it looks great, but the environmental aspects are really the big idea. It's a park that the community is going to love—it makes a great contribution back to open space not only for the city, but for the neighborhood.

Q. But do you think having a big McDonald's sign at that intersection, right across the street from the Manhattanville expansion, will clash with the modern architecture of the campus?

No. Is McDonald's going to detract from that? [Points to rendering of Jerome L. Greene Science Center.] I'm not worried about it. I think you're overthinking it. I think it is going to be impossible to not look at this and stare at it. I'm not going to be interested in a McDonald's sign.