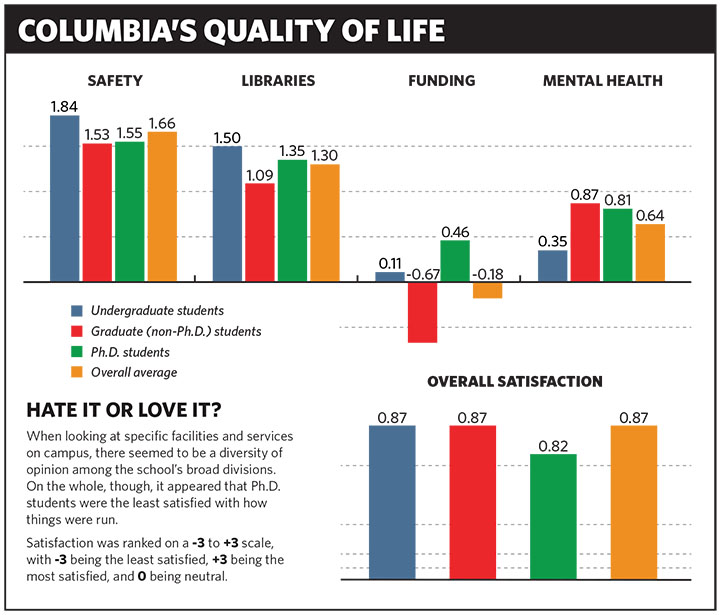 The first glimpse of results from the University Senate's quality of life survey was released last Friday.

Safety remained the characteristic with which students were most satisfied when the data was broken down among undergraduates, non-Ph.D. graduate students, and Ph.D. students.

The senate's Student Affairs Committee distributed the survey to the entire Columbia student body last April. It asked respondents to rank their satisfaction in terms of 13 categories, including academics, administration, space availability, technology, and safety.

The results of the survey will be used to facilitate discussion with administrators on potential policy changes. University Senator and Student Affairs Committee co-chair Akshay Shah, SEAS '14, said that the committee would release a final report sometime in mid-November, with the goal of using the data to drive policy decisions.

"This is the first time all students were surveyed with the same instrument," Sharyn O'Halloran, chair of the senate's executive committee, said. "I think this is going to be very, very helpful in identifying key agenda items ... and understanding common goals, aspirations, and places we want to strengthen as an institution."

At Friday's plenary, senators lauded the efforts of the Student Affairs Committee in administering and analyzing the survey, but also suggested changes for when the survey is administered again in two years. The survey was emailed to the 36,000 students that attend Columbia's undergraduate, graduate, and affiliate institutions, but only 17 percent actually completed the survey.

Some senators expressed concern with the number of respondents and offered suggestions for how to increase participation in future years, such as providing more incentives for completing the survey and administering the survey through means other than email.

"This was perhaps, on average, a bit higher than most response rates," Shah said, in reference to annual surveys administered by school councils. "But I definitely think we could improve on 17.3 percent."

Samuel Silverstein, a professor of medicine at the College of Physicians and Surgeons, asked if the committee planned to compare the data to data from peer institutions to "get a sense of where we are."

"This is a free-floating scale," Silverstein said. "What does neutral mean?"

O'Halloran said that as the senate continues to administer the survey every two years, senators will have more points of comparison and better benchmarks for analysis. She added that the Student Affairs Committee would present more of the survey's results at the plenaries in November and December.

Also at the plenary, the senate voted to establish a masters of science in carbon management and to incorporate the word "sexuality" into the official name of the Institute for Research on Women and Gender.