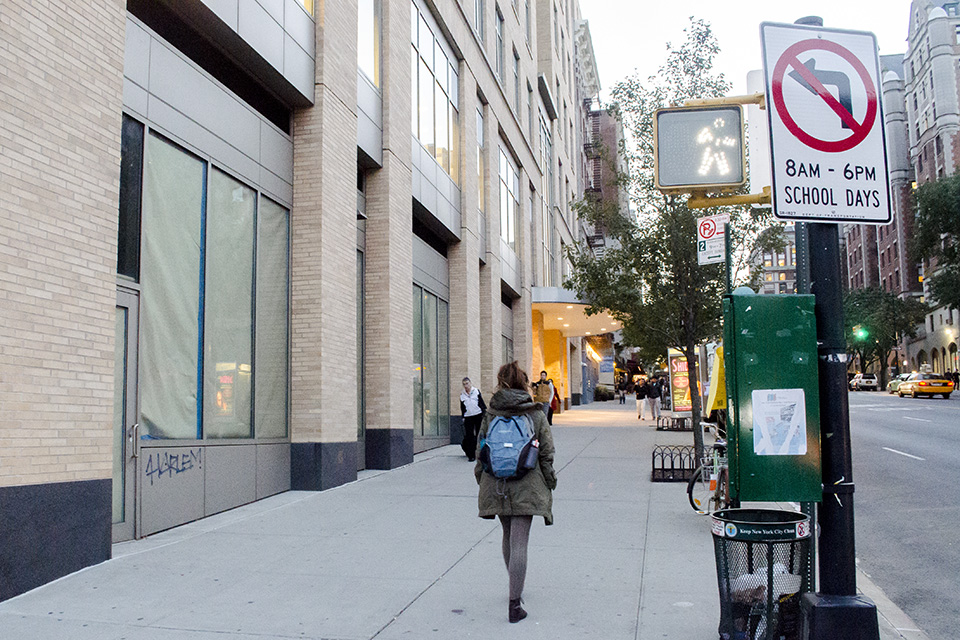 While Columbia originally planned to lease the first floor of the School of Social Work to a retail tenant, the University is now putting an academic program in the space. Some locals say the University broke a promise to the community.

The ground floor of Columbia's School of Social Work, which has been vacant for nine years, may soon be home to an academic program. But some locals are accusing the University of breaking its promises about the use of the space by changing its original plans to recruit a retail tenant.

Located at 121st Street and Amsterdam along a corridor lined with several small stores and restaurants, the ground floor of the building currently has its windows papered and has been empty since the building's completion in 2004.

While locals and elected officials have pushed Columbia to lease the space to a retail tenant—and the University originally planned to do so—administrators say that isn't going to happen.

Columbia tried to recruit a restaurant years ago, but has since decided to use the space for academic purposes, Executive Vice President for Facilities Joe Ienuso told Spectator on Friday.

The University had been pursuing plans to locate a program from the Graduate School of Architecture, Planning and Preservation in the ground-floor space. But within the last four months, administrators have started to explore an alternative academic program as well.

GSAPP Dean Mark Wigley said that the proposed project, the Center for Global Design and Development, has been on hold for the past six months while the school completes an analysis of the project's concept.

"I can't say if it's going ahead or not going ahead" at this moment, he said.

The design center had been planned to include an auditorium, a laboratory, and research space, as well as offices for visiting scholars. It would be a part of GSAPP's Studio X network and would also serve as a home for research and conferences.

Wigley stressed that right now, he could not predict whether or in what form the project would continue, but he expected the analysis process would finish within the next month.

"It doesn't mean it will not happen," Wigley said, adding that often large projects undergo a long analysis process by faculty and others. "It's just that it's on pause."

The design center is "still on the table as a possibility. It has not been completely ruled out yet," Ienuso said.

Ienuso declined to give specifics about the alternate program. "No final decisions have been reached yet," he said.

But locals have long criticized Columbia for changing its original plan, arguing that the University is reneging on early promises to the community to find a retail tenant.

State Assembly member Daniel O'Donnell, who wrote a letter to University President Lee Bollinger in August 2010 about the issue, said Monday that his feelings had not changed.

"This is yet another example of Columbia University's empty promises and blatant disregard for the needs and desires of the surrounding community," O'Donnell wrote at the time. "When planning this building, Columbia made a promise to the community that the space on the first floor would be used as a retail location as part of a plan to help revitalize the surrounding area."

Community Board 9 also passed a resolution in February 2011 urging Columbia to seek a retail tenant. According to the CB9 resolution, local retailers interested in the space had been quoted rents above the going rate for the neighborhood.

Maxine Griffith, Columbia's executive vice president for government and community affairs and special advisor for campus planning, had sent a letter in March 2011 to Dickens stating Facilities' decision to use the space to meet current academic space needs after over five years of attempting to rent the space for retail. O'Donnell and Community Board 9 were cc'ed on the letter.

Ienuso said that while Columbia looked for a restaurant early on, interest had been minimal, possibly due in part to the 2008 economic crisis.

Glenn McAnanama, a 123rd Street resident who has written to the University urging it to seek a retail tenant, said the building's first floor has been "a dead spot in the neighborhood" for nearly a decade, while other vacant storefronts along the Amsterdam corridor have generally filled within months.

For example, the new restaurant Flat Top, next door to the School of Social Work, opened within a year of the former business closing.

Ienuso noted that the area has changed and that new businesses are sprouting up.

"There's a great little restaurant row now on the west side" of the street, Ienuso said, naming restaurants such as Sezz Medi, Kitchenette, and Max Soha.

But he said the University is not interested in reconsidering a retail option.

"We pursued it, we hit a lot of dead ends, and given the need for program space, it makes sense, I think, to advance one of the two options we're looking at," Ienuso said.

McAnanama said that the situation made him doubt Columbia's promises regarding its Manhattanville expansion.

"It gives me lower confidence that they will follow through on all their plans to make that an open campus," McAnanama said.