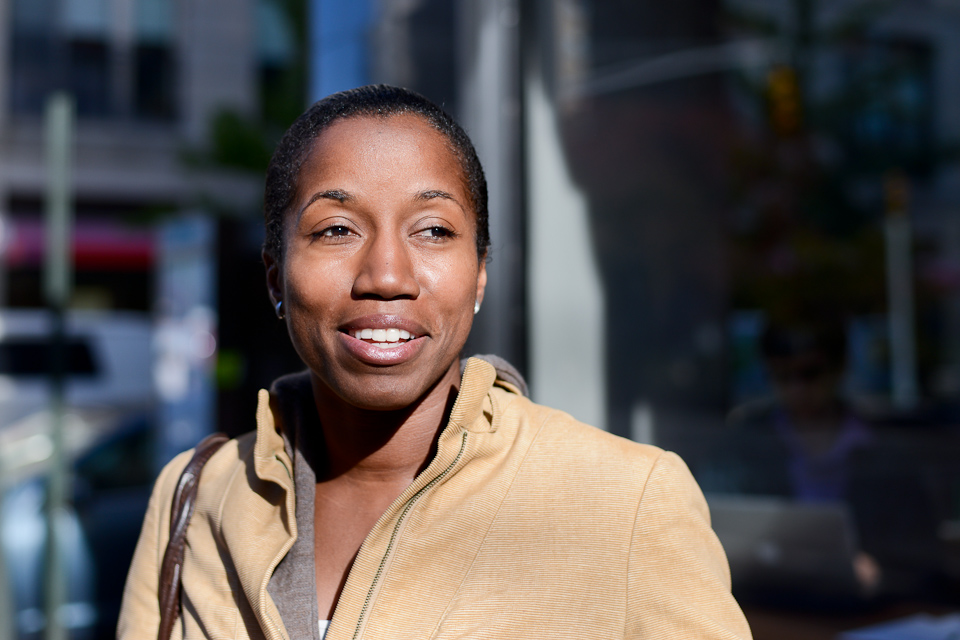 Half of her week is spent in Harlem, where she runs Harlem Hip-Hop, the tour group she founded for school groups to learn about the city's hip-hop scene. But for the remainder of the week, Smith is the 5-foot-7 wide receiver for the Boston Militia football team.

"Ever since I was a little kid, I wanted to play football," she stated. "But I didn't realize that it was even possible for girls to be on a team." She had only played flag football.

Her professional football career started eight years ago with the New York Sharks, and she's been gaining momentum ever since. In 2010, Smith caught the first touchdown in the International Federation of American Football Women's World Championship, helping the national team to victory. This July, she helped the U.S. reclaim its title in Vantaa, Finland.

"It was an amazing experience," Smith said. "Sometimes I can't even believe it happened."

"We made history in 2010, but no one knew about it," Smith, who commutes three times a week between New York and Boston, said.

This compelled Smith to create a documentary chronicling the experiences of this year's national women's team. The film, "Tackle Girls: One Team, One Mission," is being produced by the Connecticut-based Pyewackitt Productions.

Last week, Smith and other players from the national team visited Washington, D.C., where they met with the White House Council on Women and Girls to talk about Title IX and female tackle football.

Smith predicts that she will be involved in the women's football community for a while and hopes to eventually form a unified women's football league structured like the National Football League.

"I really have a vision about where women's tackle football can go," she said.

When Smith is not working on her documentary or training for the next world championship, she's in the Harlem Hip-Hop office on 103rd Street. She started the company in 2006 with fellow Columbia alumna Shannon White, Business '01.

The company specializes in hip-hop-themed field trips for students in grades four through 12. Smith calls it "edu-tainment"—education through entertainment.

"You can't have the same old 95-year-old teacher talking about, 'In my day...'" she said. "You have to be creative to really get through to kids. We try to combat the negative images and misogynistic tones in many hip-hop songs."

"If we can push those messages back to something positive, it's only going to help everybody," she said.

Smith wants to use Harlem Hip-Hop tours as a tool for improving the lives of young people.

"It's all about exposure," she said. "We'll have kids from the Bronx that don't even know that a top Ivy League school is right here."

Smith also teaches workshops on entrepreneurship to youth in the neighborhood.

"I want kids to know that there are ways to utilize their passions to make money," she said. "Not everyone has the tools or the exposure to understand how to begin that."

Between her footballing and touring, Smith keeps busy—but she wouldn't have it any other way.

"It's not a burden when you're doing what you love," she said. "I think I can still achieve things and have fun."