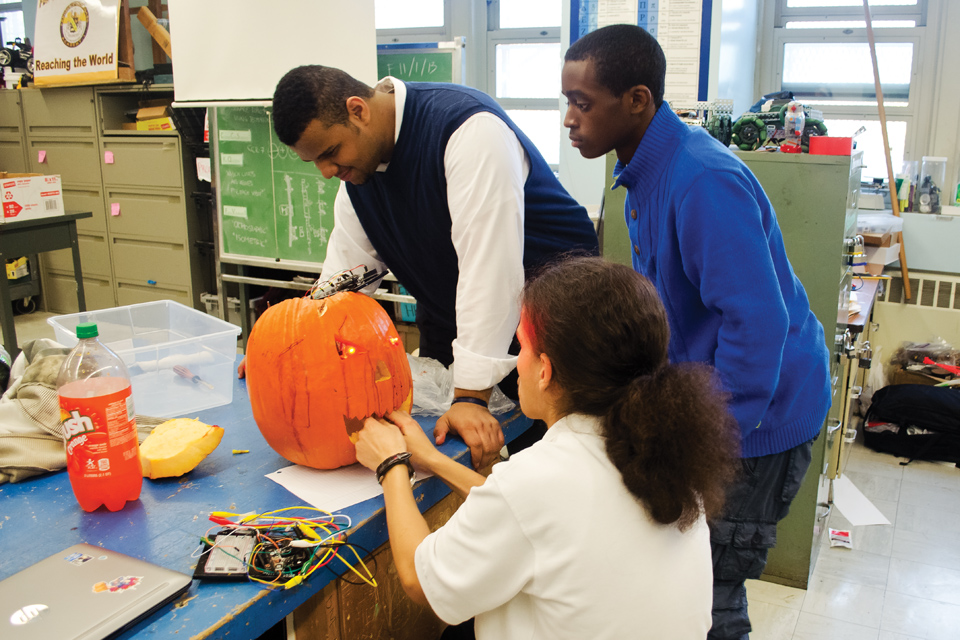 This is one story in a series profiling the grant recipients of the West Harlem Local Development Corporation. Read all of the profiles here.

Although Columbia alumnus Chelsey Roebuck founded the local nonprofit Emerging Leaders in Technology and Engineering just four years ago, the organization has been recognized for its work with a grant to expand and improve its programs in the West Harlem community.

The $33,440 grant from the West Harlem Development Corporation enabled ELiTE to scale up science, technology, engineering, and mathematics programming to serve 250 students from four local schools.

Roebuck, SEAS '10 and ELiTE president, said the grant will support the group's efforts to deepen its impact in Harlem by running a variety of after-school STEM programs.

Created as an undergraduate student project in 2009, ELiTE runs a hands-on science and engineering summer camp in rural Ghana in partnership with Engineers Without Borders.

Over the past five years, the summer camp has grown from the classrooms of a rural village in Ghana to a primary school in Tanzania and university campuses in Ghana, Jamaica, and Mexico, offering workshops and trainings in everything from software engineering and robotics to ecology and astronomy.

Now, Roebuck co-teaches computer science and mechatronics classes as part of the regular school schedule for sixth-grade and 11th-grade students.

Earlier this year, ELiTE held a Halloween Hardware Hack­a­thon event at the Frederick Douglass Academy, where 23 advanced mechatronics students were given basic electronic circuit components and pumpkins and were instructed to hack their own jack-o'-lanterns.

Columbia mechanical engineering professor Robert Stark was one of the judges at the event. He has volunteered his time working with the high school's Robotics team and is now offering shadowing opportunities to students interested in the Columbia engineering labs.

"That's a big part of ELiTE—not just teaching, but saying, Here's someone that can give you opportunities, if you really are interested, to do something with it,'" Roebuck said.

The event served as a culminating project for the first unit in the mechatronics class. The requirements were fairly broad, which allowed students to pursue their creativity by adding lights and sound to their pumpkins.

"That's the spirit behind innovation, anyway. Use your environment, use what's around you," Stark said.

Roebuck said ELiTE plans on making a big push for recruitment on Columbia's campus in December so that the organization can get more volunteer instructors to help students during these workshops.

"We've had different undergrads and grad students volunteering with us in schools, and I'd love to be able to get more," he said.

Columbia's National Society of Black Engineers recently visited FDA to speak to multiple classrooms and distribute college-oriented information as part of its annual A Walk for Education event.

"We loved speaking to the students and are definitely looking to go back to the school," Akinade said. FDA Principal Joseph Gates and Vice Principal Pasquale Cusanelli were both present at the Hack­a­thon event.

"The best way to learn is what we're doing in these classes," Cusanelli said. "What Chelsey's foundation is providing, as well as Columbia University and the increased support from Columbia, is helping these students."

"For me, a lot of the opportunities that come as a result of being recognized for these awards are almost just as valuable as, if not more valuable than, the money," Roebuck said.

"With awards and recognition, it's never really about the money," he said. "More than anything, getting the support networks and the communities that really help the students grow is what I'm most interested in."

This story is part of a series of profiles of organizations that receive grants from the West Harlem Development Corporation.