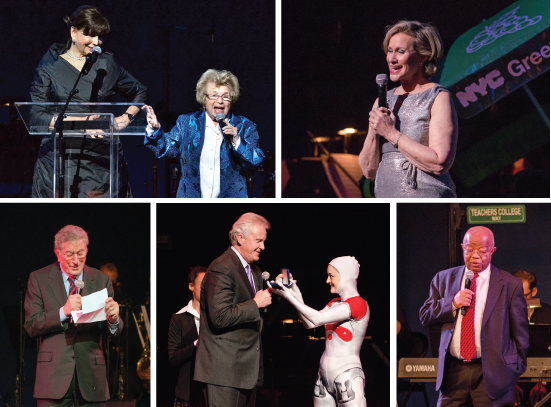 The event honored the legendary singer Tony Bennett and debuted a new scholarship, funded by Barbra Streisand in honor of her father, Emanuel Streisand, who was working towards a degree at TC when he died in 1943. The donation will be called the Emanuel and Barbra Streisand Scholarship Fund and is intended to provide support for master's and doctoral students.

Over the course of the evening alone, the school raised $1.25 million. TC President Susan Fuhrman emphasized the importance of the fundraising push, which she said is "the largest of its kind."

"We will invest in the groundbreaking work of our world-class faculty," Fuhrman said, adding an emphasis on students, renovations, and extending the school's local and global impact.

Comer spoke about growing up with parents who had little education but were completely supportive.

"They made it possible for their five children to earn 13 college degrees," he said. He highlighted the support he found at TC, adding, "My life's work is in line with [TC founder] Grace Dodge and the work of the college."

Bennett and Benedetto spoke about their organization, Exploring the Arts, and how TC aligns with its goals.

"When you use your imagination, you become an individual," Benedetto said. "I believe that Teachers College inspired my imagination."

Bennett then joined Benedetto on stage and sang an a cappella version of the 1940 hit "Imagination."

"It says a lot about the institution to invite us to perform, because it shows that they really support innovation," Emdin said.

He added that the "main themes are what is most exciting," referring to the promotion of innovation and imagination in the push for fundraising.

"True learning can only be done when you push yourself outside of your comfort zone," rapped one of the students.

Tisch, founder of the Illumination Fund, was the celebrated star of the evening and received applause every time her name was mentioned. Tisch founded the Center for Food, Education & Policy at TC.

TC students performed a song-and-dance number revolving around the introduction of produce carts on the city streets, an initiative that Tisch has been instrumental in promoting.

"I have to say, I have never, ever been introduced by a song about bananas and cauliflower," she joked with the audience.

Tisch told Spectator that she was pleased that the event attracted high-profile guests, including Bennett and former New York City mayor Mario Cuomo.

"It was really important to showcase the great work that they do," she said. "It's the first time we have had such a big audience."

Robert Schaffer, SEAS '46, TC '52, and founder of the firm Schaffer Consulting, said that he honed skills at TC that he believes have carried over to his professional career.

"We're very unlike other consulting firms in the world because we are more focused on what our clients are accomplishing than what we have to offer them," he said. "I learned that at Teachers College."