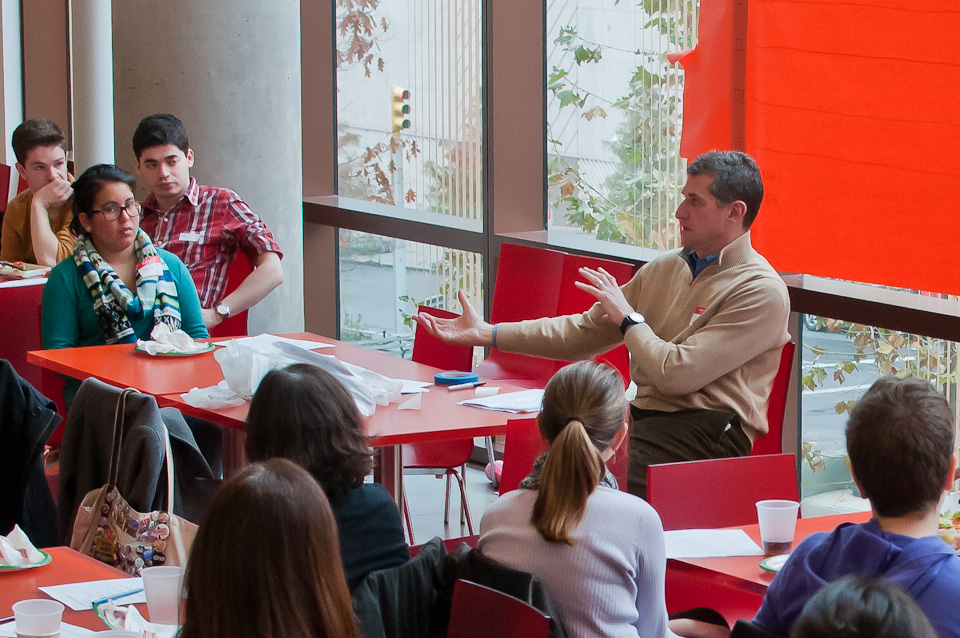 Throughout the afternoon, students heard from administrators, discussed questions in small groups, and brainstormed solutions to problems they identified with wellness at Columbia.

Administrators presented data showing that it took an average of 5.67 days after an initial phone call for students to have their first in-person appointment at CPS, and about 19 percent of students from across the University visit CPS each year. For the class of 2013, about 50 percent of Columbia College students and about 40 percent of School of Engineering and Applied Science students visited CPS in their four years.

CPS Executive Director Richard Eichler said he was pleased with those numbers.

"That's really quite high," he said. "We think that's good. We don't think it means students here have more problems, but students are more willing to access the care, and also there is more access to care, because these numbers show a fairly robust service."

In response to a question from Valerie Wang, BC '14, Eichler said involuntary medical leaves are "exceptionally rare" and "virtually never happen."

"I do worry that this might keep students from coming to see us," Eichler said. "The truth is that most students choose to leave of their own volition."

While some student see a leave of absence as punitive, Eichler said a leave should be "compassionate, in that we're saying, 'You don't have to stay here and not function if you can't.'"

Wang said she felt generally satisfied with Eichler's response to her question.

"I was glad he took the time to explain and acknowledge that there is a belief that this might happen," she said. "But I'm unsure if it's as rare as he said it is, because I've heard that people I know have been asked to withdraw."

Attendees broke into small groups to evaluate statements such as "The Columbia community is unhealthy" or "Our biggest stressors include unrealistic self-expectations." When asked to rate how they felt about such statements, students had a range of reactions to the first, but almost all responded "strongly agree" to the latter.

Much of the second half of the afternoon focused on what students identified as barriers to wellness at Columbia—and potential solutions.

The themes of access to administrators, stigma around seeking help, and pressure to succeed and conform to what students called "the Columbia myth" seemed to dominate the dialogue.

"I didn't know some of these institutions existed and to what degree they existed," Hosanna Fuller, BC '16, said after the summit. "It's great to hear different perspectives and for us all to be looking to create solutions."

Students also voiced concerns about the out-of-date websites for Health Services, CPS, and other administrative departments. Participants said a centralized website, with clear information about how to access different administrators and navigate various policies, would be useful.

"Adding a centralized website is very little work for the administration," Ari Schuman, CC '15 and co-leader of SWP, said. "We came up with ideas that are very feasible and require little work for administrators, which is important."

SWP leaders said the summit was larger than the first one the group held in the spring. That summit produced the SWP report, in which the group made a series of recommendations about how to improve wellness on campus. In the next few weeks, the group plans to write a similar report summarizing the discussion on Sunday.

"I think that it went really well," Schuman said. "We facilitated some really great discussions between students and administrators."

Other students also expressed excitement at the topics discussed during the summit.

"Especially for me, being the sole GS representative here, I was incredibly glad to hear others' issues—to realize that ours are in line with the other populations'," Hannah Germond, GS '16 and president of General Studies Student Council, said. "The willingness of the administrators presenting today was great to see."

"I'm excited about incorporating these ideas in our policy initiatives," she added.