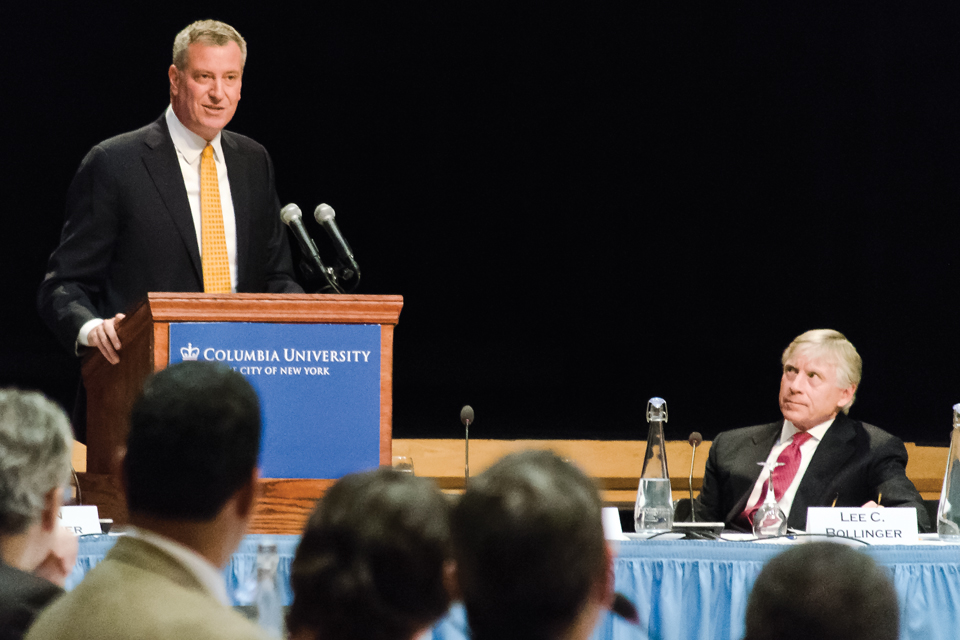 Mayor-elect Bill de Blasio elaborated on his signature plan for universal pre-kindergarten in New York Tuesday afternoon at Columbia in his first major speech after his election.

De Blasio joined David Dinkins, former mayor and a professor at the School of International and Public Affairs, Earth Institute Director Jeffrey Sachs, and National Center for Disaster Preparedness Director Irwin Redlener at the NYC Summit on Children, which was held in Lerner Hall.

"I am today standing before you ready to announce this strong, consistent fund for things that will make a difference," de Blasio said. "That means free, high quality full-day pre K for every child in New York City, free and fully available after-school for middle school children in the city."

Universal pre-kindergarten, which would be funded by tax increases on high-income earners, has been one of de Blasio's main campaigning points. On Tuesday, de Blasio said that inequalities in education are closely tied to socioeconomic inequality in the city—which he said is the highest among the largest American cities.

"Our city will rise or fall based on our public schools and how they do," de Blasio said. "Economic destiny is determined by education. They are not separate issues. They are transcendentally linked."

In a humorous moment during the speech, de Blasio compared pre-kindergarten accessibility to admissions rates among Ivy League universities.

To fund the new services, de Blasio plans on increasing income taxes on those who earn more than $500,000 per year—one of the most controversial parts of his plan.

Dinkins, under whom the mayor-elect worked during his days as public advocate, said that de Blasio should consider alternatives, such as a commuter tax, that might be easier to implement.

"There was a time when we had something referred to as commuter tax. It's an income tax on persons who work in the city but reside outside of the city," Dinkins said. "We attempted an increase, and we were not successful."

To this, de Blasio responded confidently. "I think in all of my life I'm always an open person. But I think a leader leads," de Blasio said, "and I'm convinced this is the best way to get this done."

De Blasio added that he's confident he will gain support from the state government in Albany to implement the tax increases.

In his speech, de Blasio also advocated for expanding after-school programs, which he said would add 300 hours to each middle school year and help keep students away from violence, teen pregnancy, and other risks.

De Blasio called his plan a "game-changing investment" in the education system, which he intends to implement as soon as he comes to office next year.

On Tuesday, he announced the creation of an early education "working group," comprising educators, nonprofits, advocates, and government officials, to work out the details of the plan.

"This issue will be front-centered at our agenda," de Blasio said. "We will work to make sure plans are placed to act on the initiative that I proposed."

The audience was mostly optimistic that the plans will be carried out.

"I think that the Bloomberg years of education really saw negative changes, such as an overwhelming expansion of charter schools, without a focus on improving the current traditional school system," Columbia College University Senator Jared Odessky, CC '15, said. "I think de Blasio really works towards strengthening schools in all areas."