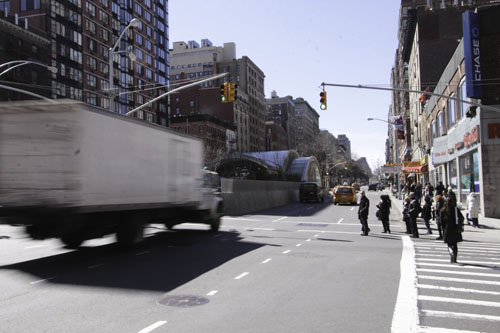 The intersection of 96th Street and Broadway, where an elderly man was killed Friday night. Local leaders are pushing for more traffic safety measures in the area.

After two pedestrians were killed on the Upper West Side Friday night, local leaders are pushing for additional safety measures at intersections.

An elderly man and a nine-year-old were killed within an hour of each other and only a few blocks apart, police said.

An NYPD spokesperson said the elderly man was killed on 96th Street and Broadway at 8:30 p.m. Friday. Cooper Stock, the nine-year-old, was killed at 9:05 p.m. on 97th Street and West End Avenue.

The deaths have brought a notoriously unsafe traffic area back into the spotlight. Comptroller and former Manhattan Borough President Scott Stringer tweeted that these incidents show that the "time for studying 96th St. traffic corridor is over" and urged the city to "take action to prevent fatalities."

A transportation study of the area by Nelson\Nygaard that was presented to Community Board 7 on Nov. 12 described problems at the 96th Street and Broadway intersection.

The 97th Street and West End Avenue intersection was not examined in the report.

"I look forward to immediately getting to work with Mayor de Blasio and fellow elected colleagues on any safety measures that can be taken," she said in a statement.