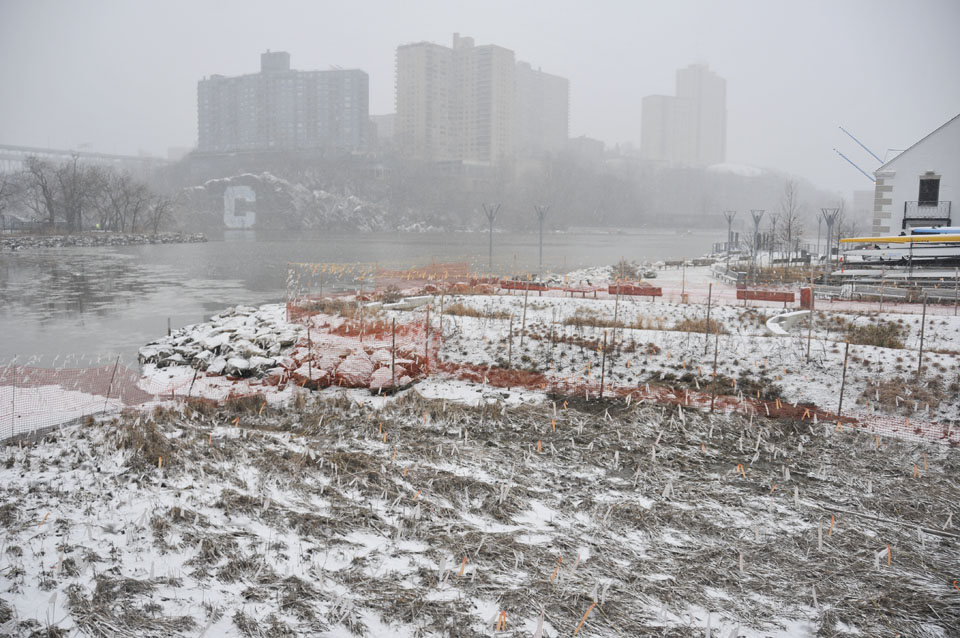 Muscota Park, a saltmarsh designed by Columbia and located near Baker field, was completed in fall 2013, but zoning laws delayed its opening until this month.

Snow blanketed the grasses and frozen saltwater at newly completed Muscota Marsh Park, which was quiet on a recent morning with temperatures in the single digits.

But cold isn't the only thing keeping some Inwood residents from being overjoyed with the opening of the saltmarsh park near Baker Field, which was built as part of a community agreement allowing Columbia to build the $30 million Campbell Sports Center.

While some appreciate the Columbia-designed park, others recall a process muddied by delays and confusion.

Though construction began in summer 2012 with a projected completion date that fall, Hurricane Sandy and further complications slowed the park's opening. Muscota finally opened in January, despite its completion in fall of 2013.

The marsh, which lies next to the Harlem River on the corner of 218th Street and Indian Road, was designed when construction of Columbia's Campbell Sports Center activated a city zoning law requiring that 15 percent of the property be designated for waterfront public access.

But, since the zoning law was enacted after Baker Field was constructed, Columbia maintained that due to Baker Field's existing buildings, topography, and shoreline conditions, the University could not provide the required amount of land for public use.

In a tied vote in 2010, Inwood's Community Board 12 was unable to approve a recommendation for or against Columbia's plan to fix up the park.

"One of the things that was very motivating for the members who did support the plan was that this area was going to be cleaned up, preserved, and maintained, and that it was going to be open to the public," said Pamela Palanque-North, who chaired Community Board 12 during the vote.

Still, Palanque-North stressed that community boards, as recommending bodies, would have had to defer to the City Planning Commission for the "final say" on the matter, regardless of the vote's result.

In 2011, the commission voted 11-1 to allow Columbia to develop Muscota Marsh, which would provide public access to just 10 percent of the 181,000 square feet of land the law would ordinarily stipulate.

A portion of the land provided was already owned by the city, so Columbia entered into an agreement with the Department of Parks and Recreation to provide public access and use of a dock for small boats.

According to Columbia's facilities website, the marsh "is intended to build on the natural history of the site and enrich the biodiversity of the Harlem River valley."

Its plants, though currently covered in snow and protected from Canada Geese by a complicated arrangement of orange string, should provide habitat for wildlife, improve the aesthetic of the riverbank, and filter rainwater running off the land before it enters the Hudson. Design of the park was led by James Corner Field Operations, which oversaw the development of the High Line in Chelsea.

Some residents were pleased with the park, noting that its design is an improvement over previous conditions at the site.

"What was there before, nobody could access," Rich Shemaria, a resident of Inwood, said. At the park, he added, "You feel like you're right on the river."

"Basically it was old tires and overgrown," said Bruce Katz, another resident who agreed the new marsh is an improvement.

But, he added, there were issues with the creation of the park. "Everyone here was just frustrated with the pokey construction and the disputes over who has jurisdiction," he said.

David Brodherson, who was active in the Inwood Mobilization Committee's opposition to the park's opening, agreed. He said the opening was "long overdue and grossly inadequate," noting the park's lack of parking and the trees that were torn down during construction.

But Rachel Wilde, manager of a coffee shop adjacent to the park, was glad the trees were gone, maintaining that they had provided a hiding spot for illicit activities.

"This is a business corner," she said of the site. "We want our employees to be safe."

Shemaria, though happy with the marsh, did note one recommendation for Columbia.

"I think if they want to continue the goodwill to the community, they'll go out and erase the big C on the rocks," he said, referring to the large  initial that adorns an outcropping across the Harlem.

"We know Columbia's here," he said.