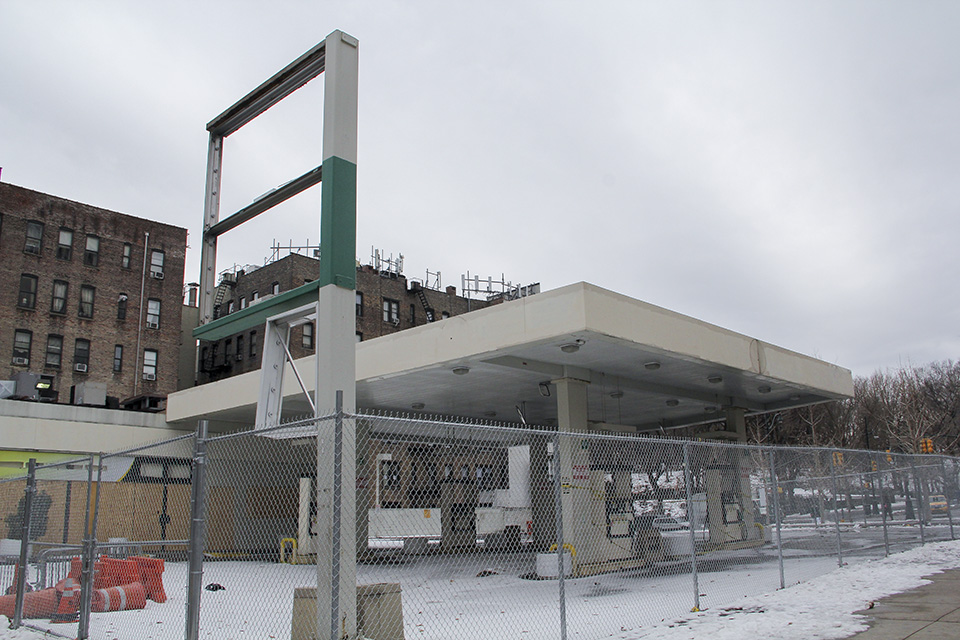 Artimus Construction plans to develop a housing and retail development at the site of a BP gas station, which closed in 2013. Some local residents are disappointed that they could not provide feedback in the decision making process.

The only gas station alongside Central Park North is now boarded up, as plans to fill its site on 110th Street and Frederick Douglass Boulevard with a housing and retail development move forward.

While some residents believe that the development on the site of a former BP gas station, which closed in 2013, will benefit the area, others felt that they were not properly consulted about their views on the project before a developer was chosen.

Last month, New York City's Economic Development Corporation chose Artimus Construction to take control of the development, after a lawsuit from Carmie Elmore, the former owner of the gas station at the location, to stop the development was dismissed. Elmore declined to comment for this story.

The proposed development will be made up of 80 percent market-rate apartments and 20 percent affordable housing units , which, according to EDC spokesperson Ian Fried, is in line with the needs of the community.

"Artimus was selected based on its ability to meet the goals set out by the Request For Proposal, which includes affordable housing and a community facility space," Fried told Spectator.

Melvin Christian, who chairs the housing committee for Community Board 10, said that the development is potentially beneficial for the area.

"It's in line with most of the changes that are happening in the community," he said, adding that the development could generate business for local stores by attracting more customers.

Jeff George, an eight-year resident of the neighborhood, said that the development could also increase the property value of the surrounding apartments.

"It's a natural thing to happen to any neighborhood," George said.

Anne Simmons, who lives across the street from the development and is a member of the Friends of Frederick Douglass Circle, thought the proposed building was a long-time coming.

"The feeling that we had in our building was, this was supposed to happen 25 years ago," she said.

But not all residents are as hopeful about the development's possible benefits to the neighborhood.

Valerie Jackson, a West Harlem resident for the last 25 years, connected the development to the increasing gentrification Harlem has seen in recent years.

"It's displacing people who are living here for years," Jackson said. "It's not going to be housing for people who've lived in the community as long as I have."

Helen Arnold, who has lived on Frederick Douglass for 25 years, also expressed her concern that Artimus wouldn't begin making progress on the development for a while and that the site would remain underdeveloped.

"How long is it going to sit like that?" Arnold said of the shuttered gas station.

Simmons said that Artimus has not made progress on the St. Thomas the Apostle Church lot on 118th Street, to which it won development rights in 2012 for $6 million after the church closed in 2003. She noted that this site "has been an ongoing problem for the people living next to it because it's unsecured."

Artimus has erected a fence around the plot on 110th and Frederick Douglass, but according to Simmons, there is not yet lighting at the site.

"It's a little odd that Artimus has this other lot that's been vacant for three years and hasn't been developed," said Simmons. "I'm hoping that they did their homework," she added, referring to the EDC's decision to name Artimus the developer of the property.

Dianne Pobuda, president of Friends of Frederick Douglass Circle, said that while she supported the overall project, she was frustrated that the EDC did not reach out to community members during the decision-making process.

"I'm a little disappointed that they didn't let us get involved with the selection of the contractor, which we thought they were going to," Pobuda said.

In the meantime, some residents are already looking back on the site with nostalgia.

"It was festive—kind of like a meeting place for people, like the cab drivers who live in this community," Jackson said.

"It's okay to change—change is important—but you have to keep the old and embrace the new," she added.