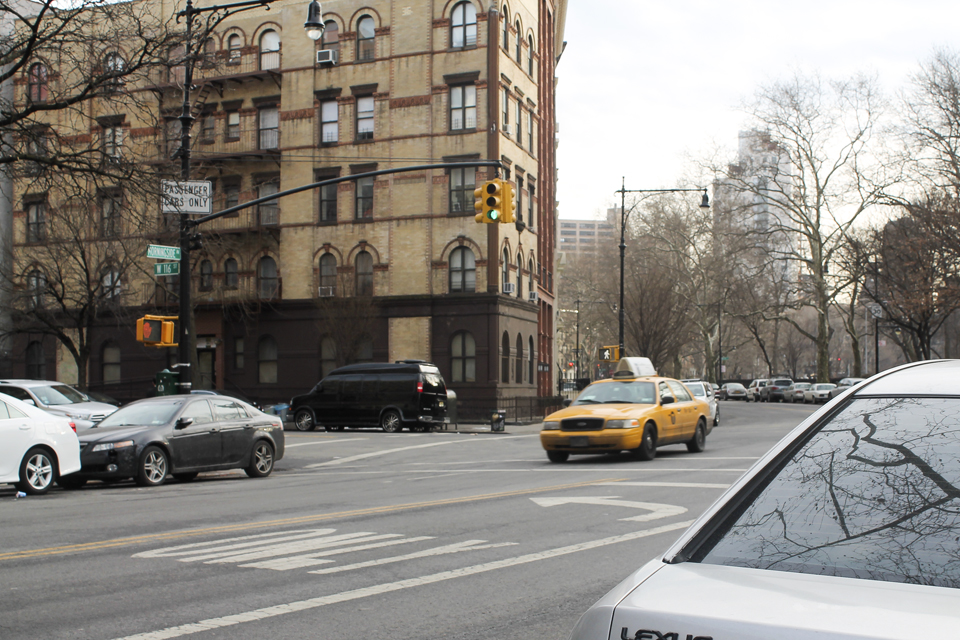 A taxi speeds down Morningside Avenue near 116th Street. Despite recent pressure from locals for the Department of Transportation to implement traffic-calming measures on the avenue, Community Board 10 wants a revised plan from DOT first.

Despite pressure from local politicians to implement traffic-calming measures along a stretch of Morningside Avenue, Community Board 10 leaders said at a meeting last Thursday that they want a revised plan from the Department of Transportation before continuing discussions.

"Two places where they reduced lanes, it created other problems," CB10 chair Henrietta Lyle said of the DOT's other changes in Harlem. She said a lane reduction in August on Mount Morris Park West aimed at slowing cars instead squeezed pedestrians, parked cars, and motorists into dangerous proximity.

"Right now, DOT's not doing anything unless they come back with a revised plan," Lyle said.

Last fall, the DOT presented plans to reduce lanes and introduce medians along Morningside Avenue between 116th and 126th streets—a runway-like stretch of road that local residents have long complained needs changes. Community Board 9, which shares responsibility for the avenue with CB10, voted to approve the proposal in November, but CB10 voted to hold further discussion.

After a spate of pedestrian deaths across the city in January, District 7 City Council member Mark Levine and State Sen. Adriano Espaillat wrote a joint letter to the DOT supporting the proposal.

But instead of implementing the proposed changes, it was revealed at the CB10 meeting that the DOT will come up with a new plan that addresses the board's concerns by March or April.

Still, the lack of action on CB10's part has some safety advocates accusing the board of slowing down the overall process.

Deborah Gilliard, co-chair of CB10's parks, recreation and transportation committee, said the board still supports safety measures and felt that it was being used as a scapegoat.

"We always are safety first. That's our priority," she said. "Speed bumps by the school, that's automatic."

Karen Horry, the other co-chair of the committee, said she encouraged CB9 transportation chair Carolyn Thompson to steer her board away from supporting lane reductions and instead request the DOT to "identify alternative measures."

But despite Lyle's recent assertion that the two boards are "on the same wavelength," DNAinfo reported last week that Thompson does not intend to ask CB9 to amend its support of the proposal.

JP Partland, a local bike lane activist and advocate of the original DOT plan, said that he was disappointed that changes would be delayed.

"The community board appeared to have little interest in engaging the community," he said. "I don't think anyone in the transportation committee went out and visited anybody who goes to Morningside Park, or who goes to school along Morningside."

With three schools located along that section of Morningside Avenue, some residents said that debates over the specific details need to take a backseat to immediate actions that can take place.

"Drivers in this neighborhood generally do not obey the speed limit," said Nan Mead, PTA treasurer at P.S. 180, an elementary and middle school on Morningside Avenue. "We absolutely have to have the changes because there aren't enough traffic lights and the lanes are too wide."

"Anything they were trying to do to reduce traffic or reduce speed in close proximity to where children are playing, I support," said David Martinez, a 10-year resident of the neighborhood who was visiting a playground on Morningside Avenue with his children Sunday afternoon.

He said that even though there are traffic rules in place, "that doesn't mean cars aren't constantly speeding."