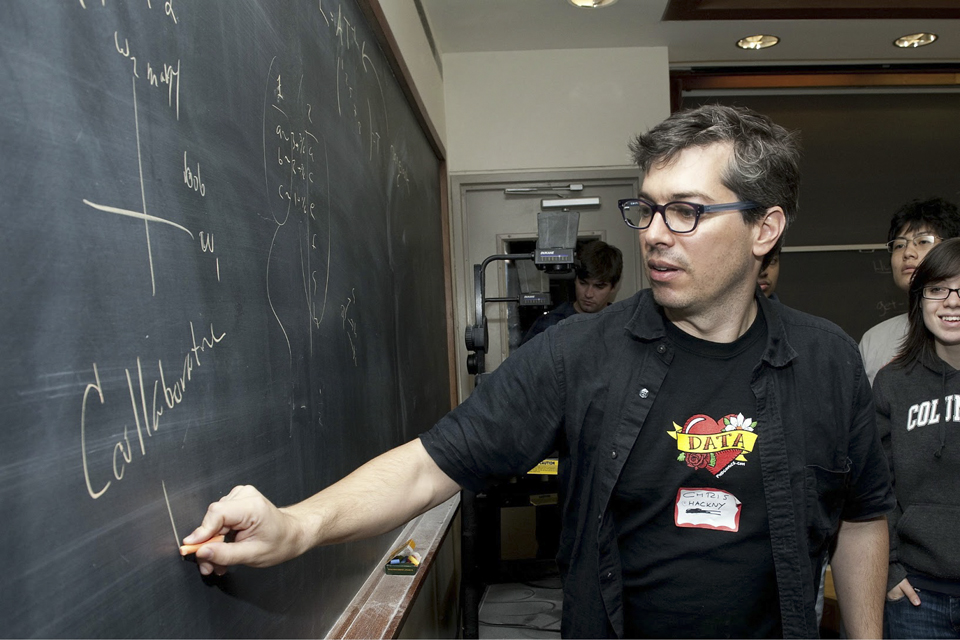 But after Wiggins joined the New York Times as its chief data scientist earlier this year, he said he thinks he will face even bigger challenges.

"It's exciting to see what is the same and what is different when you change both the domain and the scale," he said. "The streams of data produced from people just streaming from the [New York Times] site every half hour are bigger than any data sets I worked with in biology."

Adding to the novelty is Wiggins' own interest in the future of journalism—even though he hasn't worked in the media industry before.

"It's a very exciting time to rethink what journalism is going to look like over the next 100 years," Wiggins said, mentioning Amazon founder Jeff Bezos' purchase of the Washington Post last year. "I really believe that journalism is really important to the functioning of a healthy democracy, and it's being challenged right now because the central business of the past 200 years has evaporated."

Wiggins, CC '93, will be working in the Times' research and development department, an opportunity he came across through former colleagues while on sabbatical last year. His position won't affect his work at Columbia though—he will only be at the Times once a week.

"We all agree that we need journalism, and I think the New York Times is very forward-looking and very engaged with trying to build that future," Wiggins said.

Zachary Newman, CC '14  and president of the Application Development Initiative, said that Wiggins' involvement in non-Columbia programs could benefit his work back on campus. Wiggins is currently the adviser for ADI.

He's "someone we turn to when we're looking for advice about the direction of the club and how we can achieve our mission," Newman said. "He'll come back with concrete suggestions, like 'You need to market better,' or 'You need to focus more on education.'"

Wiggins has similar thoughts about how his experience could help the club he advises.

"Most of my research before was very traditional scientific computation, and there's a whole new set of tools for data science and data engineering that I'm learning, and now I'm able to teach them to my students," he said. Students are often ahead of their professors when it comes to the latest trends, he added, but "now I'll finally be able to keep up in conversation with my teacher-students."

"I'm a better adviser to my research students but also to student groups by virtue of understanding how a successful technology company works," Wiggins said.

"Chris is great because even though he's firmly rooted in academia and does a great job there, what he really cares about is a lot more outreach," Newman said. "Chris is someone who's deeply attached to New York, and his love for the city encourages him to facilitate the growth of its tech community."

Wiggins believes that staying active in the engineering field is essential to the work professors do back on campus.

"They have a better sense of what technology is current, and they do a better job training future engineers," he said.  "The engineering departments that are the strongest in this country are the ones where the faculty really engage with the real world."

Beyond his position at the New York Times, Wiggins keeps himself involved with the local tech community through organizations like hackNY, a Columbia-NYU partnership that prepares new hackers to partake in the New York innovation community, and Columbia's Institute for Data Sciences and Engineering.

"Having engineering faculty engage with technology companies historically has been a great virtuous cycle where the local economy gets stronger, the local community becomes a more innovation-centered place, and the local engineering schools also benefit from attracting the best students and faculty and having those students stick around and apply what they learn," Wiggins said.

Correction: Due to an editing error, a previous version of this article misattributed the quote starting "Students are often ahead..." The sentence was paraphrased from a quote by Wiggins, not a verbatim quote. Spectator regrets the error.