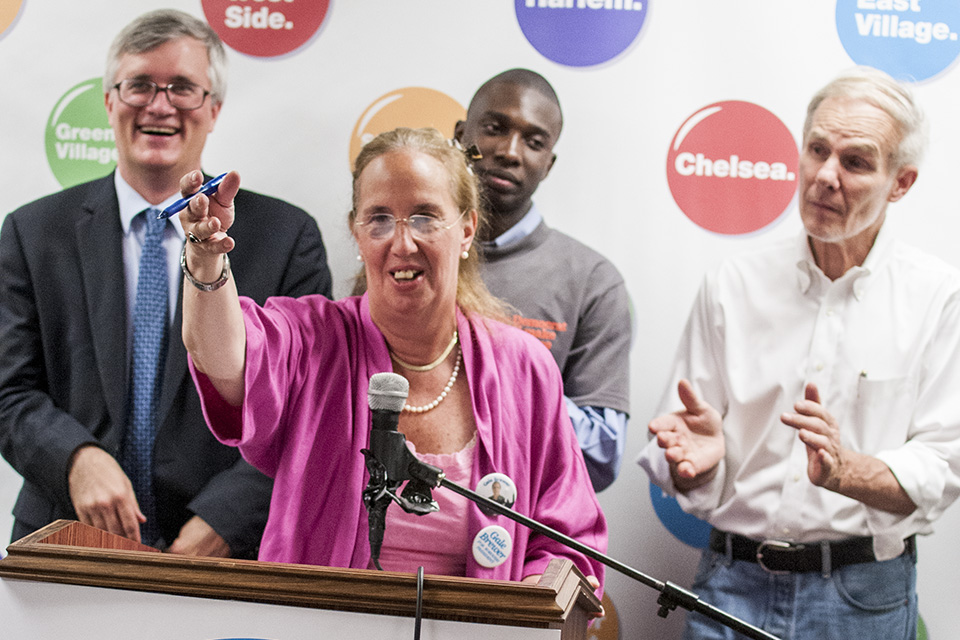 Brewer, who was chair of the City Council's Technology in Government Committee from 2002 to 2009, was an important advocate for the introduction of NYC OpenData, a public catalog of government-produced data "to improve the accessibility, transparency, and accountability of City government," according to the initiative's website. The data includes demographic breakdowns of the city's ZIP codes, the tonnage of recycling collections in neighborhoods, and results of restaurant inspections, among other things.

Brewer said that the information can help the community board chairs make informed policy decisions, but parsing the data into digital bits is an obstacle.

"The community boards only have about three people on staff and 50 volunteers," Brewer said. "They don't have time to make sense of it."

Instead, NYC OpenData will pair up the community boards with technology groups to help analyze the data that's relevant to them.

"We're going to have them sit down with the district managers and the chairs," Brewer said. "It's the kind of thing that Columbia can do in two seconds but the community boards cannot."

Community Board 7 Chair Elizabeth Caputo attended the Jan. 27 Manhattan Borough Board meeting where Brewer brought in five groups interested in working with the city to make data more accessible. BetaNYC, Socrata, Open Plans, Ontodia, and CUNY Graduate Center have all been involved in promoting transparency in government and expressed enthusiasm specifically about working with the community boards.

"I'm looking at where our priorities are to see what kind of data we want to collect," Caputo said. "That way, when we put forth a resolution, we have some real data to back it up."

However, Brewer said that she and the technical groups are still working out logistics as to how to best present the data to the community boards.

"One of the issues that came out of the meeting is, 'How do we get data that the CBs can make sense of?'" Brewer said. "I don't know the answer to that problem."

Caputo said that she looks forward to collaborating with the technology groups to get more specific information about the different aspects of the District 7 community.

She cited affordable housing units and education demographics as examples of data that they're hoping to use to determine policy.

Henrietta Lyle, the chair of Community Board 10, agreed that using data for policy-making has large potential.

"We need real information if we're going to make real decisions about our community," Lyle said.

Mark Diller, former CB7 chair, said that the board found census data and City Council budget information useful in the past, and that additional data will provide a more complete picture.

"The more that Gale is successful in placing raw data and summaries of raw data, the better equipped community boards and everyone else will be to advocate for specific items that we think will be beneficial to the community," Diller said.

Data about traffic-related deaths and injuries is something that has been thrown into the spotlight recently with Mayor Bill de Blasio's Vision Zero initiative, as well as the three recent deaths that occurred near the West 96th Street and Broadway intersection.

While Brewer said she sees data usage as an important way to improve traffic safety, one problem that she noted is the differences between how the Department of Transportation and the New York Police Department collect data.

Caputo asserted that CB7 is committed to working on making Upper West Side streets safer. Noel Hidalgo, executive director of BetaNYC, posted on the Meetup.com page for the group in anticipation of the Jan. 27 meeting.

"Manhattan Borough President Gale Brewer, our 'god mother,' is actively taking our work and putting it into the hand of Community Boards," Hidalgo wrote.

Diller said that he sees this technological push as an important step forward for the community.

"Every time you make information more available to a community board, you're doing something that will inform their discussion better than they did before," Diller said. "There are no losers in this."