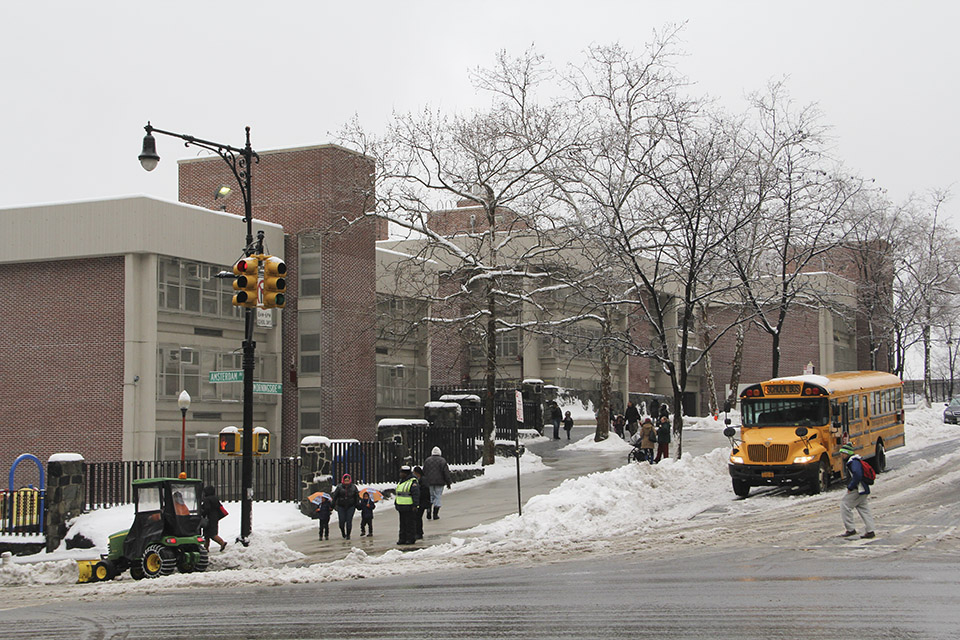 The city launched a new website centralizing kindergarten applications in January. Above, P.S. 36 on 122nd Street.

Kindergarten Connect, launched by the Department of Education in January, allows parents to apply for kindergarten through a centralized website, replacing paper applications that had to be submitted in person at schools.

Still, the new application, which is due on Feb. 14, is currently only offered in English, although instructions are available in nine other languages. And though parents can also apply by phone or in person at a borough enrollment office, news of the changes is difficult to access without a computer.

"You can no longer go to a school, pick up an application and apply," said Miriam Aristy-Farer, president of Community Education Council 6, which serves as a liaison between parents and the school system.

Aristy-Farer said that parents now have to have "a digital identity" to complete the application.

"I don't think it's working," Marilyn Barnwell, program director of education at the Bloomingdale Family Program Operation Head Start on 107th Street, said. "It only works for parents who are English-speaking, because it's all in English. It only works if parents have a computer."

According to the DOE's website, the new program "is designed to make applying to schools easier."

But according to Aristy-Farer, the DOE's promise of language accessibility may be a difficult one to uphold, given the diversity of languages spoken in some school districts. The department's website says that translation services are available in 200 languages when parents apply over the phone.

"These languages are not in the system," she said, referring to indigenous Mexican languages spoken among families in District 6.

Aristy-Farer added that applying at a borough office still presents challenges. There are only two offices serving all of Manhattan, one in Midtown and one on 125th Street.

"It requires parents to [pay] out-of-pocket the transportation there and back," she said.

Barnwell and some parents also reported technical difficulties with the website itself.

"My computer skills are limited, but I was trying to help them and I couldn't figure it out," Barnwell said.

Massel Lagares, the mother of a pre-K student at P.S. 36 Margaret Douglas, said in Spanish that while she had successfully used Kindergarten Connect to enroll her daughter, the system did not initially recognize her address.

"The whole experience is hard," said Jeanne Hung, whose first child is entering kindergarten next year, although she hasn't finished the application yet. "You have to do the whole application five or six times to apply for charter schools or private schools."

Aristy-Farer said that many of the city's Head Start programs, a federally funded prekindergarten initiative for low-income families, were informally tasked with helping parents through the DOE's new process, even though they receive no additional funding.

"It takes a long time to sit with a parent to make sure parents know what they're doing," Barnwell said. "It would be insulting to just ask them information and put it in. You want them to feel that they are applying themselves."

She added, however, that her primary concern was that some families may not even apply because they might not know about the new process before the Feb. 14 deadline, especially if their children are not enrolled in Head Start programs. In past years, many parents simply applied in person at their local kindergartens in the fall.

"Come June or July they have no school and then they get in trouble," Barnwell said.

"In our district we do have a lot of walk-ins in September," Aristy-Farer said. "What does that do to them if the zoned schools are full?"

The DOE's website said that while students have a "right" to attend their zoned schools even after the deadline, they may still be moved if the original school is overcrowded.

The new system, however, forces applicants to rank up to 20 schools—leading some to fear that parents will pick schools solely based on report cards or academic rankings.

"How are they going to meet everyone's first choice if everyone picks the same school?" Aristy-Farer said.

A DNAinfo article published on Feb. 6 reported a surge in applications for an Upper West Side school, quoting CEC members who blamed the problem on Kindergarten Connect allowing parents to list up to 20 schools.

And while the DOE maintains that there is no "strategy" parents must employ to rank schools on the application, CEC members pointed to the difficulty of maintaining both zoned and first-choice schools as options.

"If they're accepted into a school that is theoretically a higher choice, they're not going to get their local zone school," Community Education Council 3 member Noah Gotbaum said.

Gotbaum also pointed to rising charter school applications as an indication that charters stand to gain from the switch to an online system.

According to Aristy-Farer, the ranking system makes unrealistic demands of busy parents.

"It requires parents to really understand their choice," Aristy-Farer said, adding that the information the DOE distributes "doesn't necessarily match what you would see if you visited the school."

"I don't think many parents were able to visit all of the schools," she said, adding that many schools did not have time to schedule open houses.

"It's not bad to have the option of applying online, but it shouldn't be the only way to apply to kindergarten," Aristy-Farer said. "But you do need to retain the human connection."