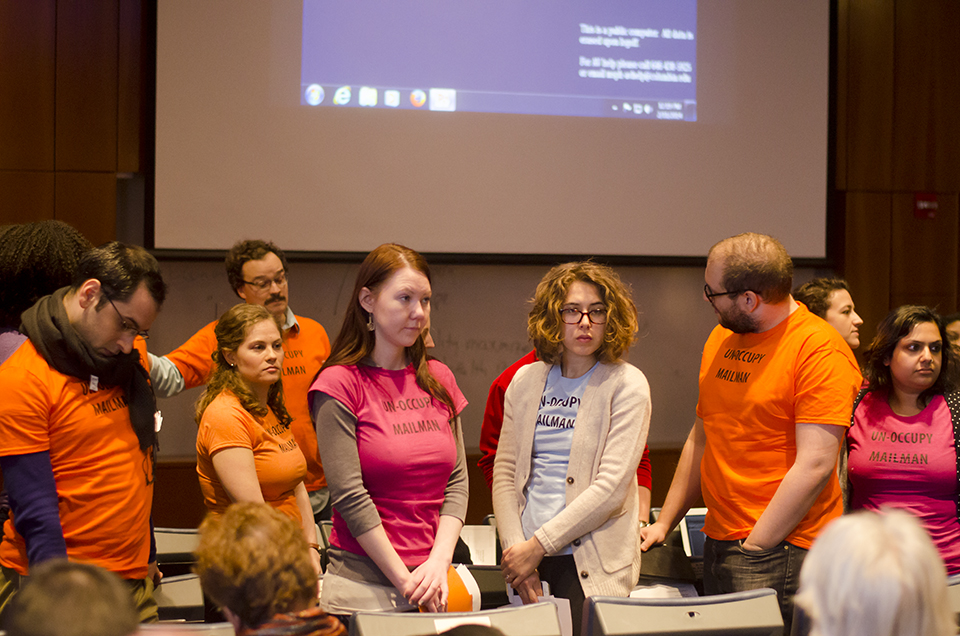 Prompted by recent layoffs of two public health professors, students at the Mailman School of Public Health are urging administrators to change the way the school is funded and rehire the professors.

"We're poised to potentially lose faculty that have been teaching at the school for thirty years," said David Johns, a Public Health doctoral student of sociomedical sciences who led the presentation. "That's not the kind of institution that we would hope to be a part of. That's why we're here. We intend this to be a conversation."

"What we stand for and what we're against is the design of the school funding model and its privileging of NIH priorities without equally supporting mentorship, teaching, and scholarship," he added.

Hopper, who wasn't at the meeting, said he thought his and dismissal was tied to funding issues.

"My major salary support comes from my FT research appointment elsewhere, which is also where my grant support is housed. So, I've tried to fulfill my faculty responsibilities and earn my SMS [sociomedical sciences] keep by teaching and advising students,"  Hopper said in an email. "That's worked fine for the past 12 years or so, but whatever hidden aquifers have fed that well in the past have dried up."

Vance, present at the meeting, also said that there was an increasing problem with the school's model of relying on grant funding for teaching salaries.

"The students are correct in pointing out that requiring faculty members to fund 80% of their salaries through external grants is unbelievable at an educational institution," she said in an email. "This means that only 20% of faculty time is available for teaching, mentoring, and advising."

Seventh year doctoral student Sara Lewis asked how the students can get involved in getting more money from the main campus to Public Health, mentioning the $6.1 billion capital campaign that wrapped up last week.

"We understand that fees being claimed by the downtown campus have been increasing by about five percent over the past few years and that Mailman has been unable to help these exorbitant increases," Lewis said. "We recognize that the University is not giving you enough support, and if the school does actually value social sciences as a part of the overall institution, then this model is not tenable."

Other students asked how the school expects to maintain a certain level of teaching when professors are expected to raise 80 percent of their salaries through grants, and how the school will continue to make degrees affordable for all students.

"One of our main concerns is how to ensure that doctoral students can maintain health insurance after they're covered in coursework," Caitlin McMahon, a second year doctoral student at Public Health, said.

Administrators and professors at the assembly largely spoke out in support of the student efforts to begin a conversation.

"Public health depends on soliciting feedback from all stakeholders. That is why Dean Fried invited doctoral students to share their concerns — concerns we all have — about the importance of maintaining the high quality of a Mailman education in the face of reduced federal support," Peter Taback, a spokesperson for Public Health, said in a statement. He added that Dean Linda Fried had gone out of her way to include students in the meeting.

"How do we make it not just a performance but something that's going to change our future?" Amy Fairchild, professor of sociomedical sciences, said.

Taback said that public health education was traditionally funded by the NIH, but that administrators were working with students and faculty to see what changes could be made.

"Public health education was built on a model that is challenging to sustain with the current budget of the National Institutes of Health and other funders, a situation the public health community in this country is grappling with," he said. "Dean Fried is working in an ongoing way with academic and administrative leaders, with students, and with faculty to understand our needs and determine how we can meet our mission and expectations with new financial approaches."

Ronald Bayer, professor of sociomedical sciences and co-chair of Public Health's Faculty Steering Committee, responded to the students at the meeting with cautious optimism.

Correction: A previous version of this article incorrectly stated that neither Hopper nor Vance were present at Tuesday's meeting. Hopper was not present, but Vance was. Spectator regrets the error.