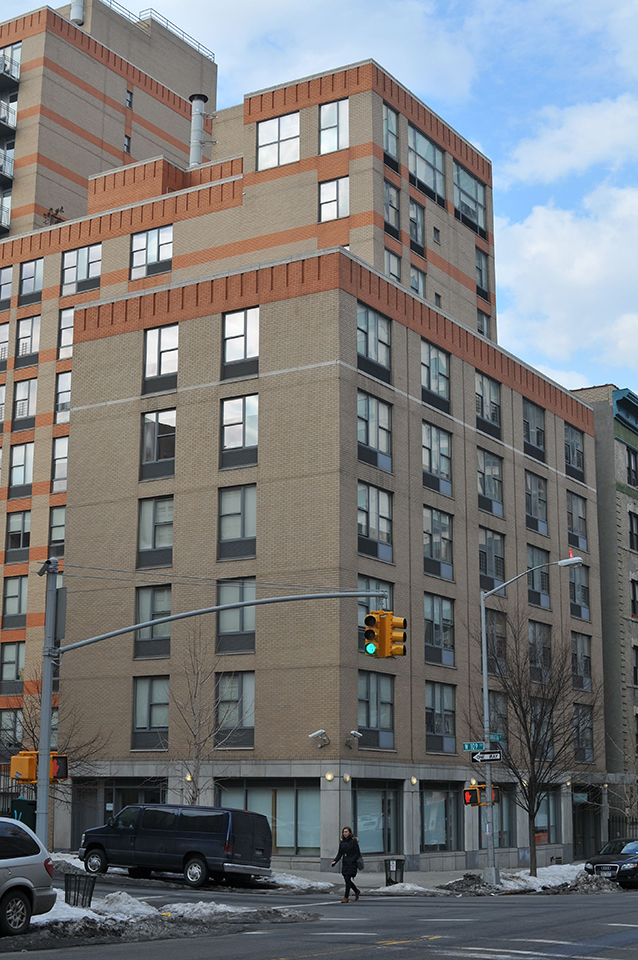 Cathedral Gardens condominiums is hoping to wrap up a four-year legal battle with developer Artimus Construction over facilities and structural problems.

Residents of the pioneering multi-use Cathedral Gardens condominiums are hoping to soon wrap up a four-year legal battle with developer Artimus Construction over facilities and structural problems that they say have been ongoing since they moved in.

Belina Anderson, the president of the condo board, said that after several inspections, the residents and litigation team should receive an estimate on the cost of the damage soon and will then push for a settlement with Artimus.

"We are alleging construction defects so we needed to have an architect and engineers inspect the building," Anderson said. "The two defendants [from Artimus Construction] inspected the building as well. We have the inspections complete and we are awaiting a final result. We are waiting to see what the total cost will be."

The building, on Manhattan Avenue and West 110th Street, made headlines in 2006 when it became one of the first buildings in the city to be designated half to students and half to college-unaffiliated residents. It is also part of the Cornerstone Program, a Bloomberg-era Housing Preservation and Development "multifamily new construction initiative that was designed to facilitate the construction of mixed income housing on city-owned land," according to the building's website. The idea was to provide more low- and middle-income housing at the height of the real estate bubble.

Currently, the building is split in half between Barnard Housing and non-University-affiliated residents.

Residents say that problems with the apartment became clear fairly quickly. Some of the issues include leaks whenever it rains, poorly assembled cabinets and wooden floors, unsafe balconies, and a crack on the building's front facade.

"The city offered the developer tax incentives to offer these to a certain level of income," Fariba Nassiri, a resident who has lived in the building since it was built, said. "The guy did it cheaply and there are a lot of things that went wrong."

Anderson said that the residents of the building­—many of whom bought units in the building before it was built—have put so much money into fixing the problems that the set prices they signed on for have turned out to be far more expensive than they intended.

"When we were buying we perhaps naively thought that because the government is involved that there would be some controls over the quality of work, that the developer had a good track record, otherwise they wouldn't have been granted the proposal," Anderson said. "All that is really not the case. Once the developer gets the project, HPD just goes away."

Eric Bederman, a spokesperson for Housing Preservation and Development, said in a statement that they are actively engaged with the residents and the developer.

"Last year, at the request of the Council member we worked to facilitate a dialogue between the condo owners and the developer with the hope that they could come to an agreement that was beneficial to both parties. My understanding is that both parties have put their litigation on hold, and that the condo board has done some work that the developer is monitoring through their consultant," Bederman said.

Anderson said that progress was stalled by political turnovers. She said that Christopher Gonzalez, director of intergovernmental relations at HPD, got shifted from working on their building. Also, Melissa Mark-Viverito had just begun advocating for them until she was suddenly redistricted, leaving them with a freshman council member in Mark Levine.

Mark-Viverito "got HPD to pay attention to our building and to circle back to the Cornerstone Program," Anderson said. "The reason that we felt that public officials should be concerned was that taxpayer funding was going to this. Bloomberg was getting all this credit for creating middle-income housing and nobody looked back."

Elaine Chen, who was the first person to move into the building and previously held Anderson's position as the board's president, mentioned the commitment that the residents feel to making sure that this does not cause more problems.

"If there are defects in a building that are this severe, one wonders if it's possible that we are the only building that experiences it," Chen said. "I'm concerned about my own building and the neighborhood. I'm hoping that they will work with us and do the right thing."

Artimus has become a huge presence around West Harlem in the last few years, with plans to build housing at the site of the former BP gas station at 110th Street and Frederick Douglass Boulevard, and at St. Thomas the Apostle Church on West 118th Street and St. Nicholas Avenue.

"It's maddening. They are just gobbling up Harlem," Anderson said. "Is anyone paying attention to whether or not these people can even build anything to keep out the rain?"

"The least you can do is give us some assurance that you are going to take this into consideration the next time you award a contract. Take a really close look at these developers. There's no information out there in the public record about whether they're performing well," she added.

Several residents, including Anderson, attended the January Community Board 7 full board meeting, where they spoke of their specific attempts at acquiring the Cornerstone subsidy agreement. This document would have details about the subsidy—which Anderson says was worth $656,000—that the city gave Artimus for the building. They have not been able to get a hold of the document from either the developer or HPD.

CB7 president Elizabeth Caputo said that she could not say much about the case because it is ongoing.

"There's still a lot of negotiation and a lot of stuff going on," Caputo said. "I think they are trying to work out a plan. We're really just trying to work with all parties on this."

Though Anderson said that the residents' actions have not gained any traction, she said she remains hopeful that a settlement will soon be reached.

"Once we have the final figure in hand, we can set up a date to sit around the table and negotiate with the developer and the architect," Anderson said. "We're very happy that that is coming to a close."