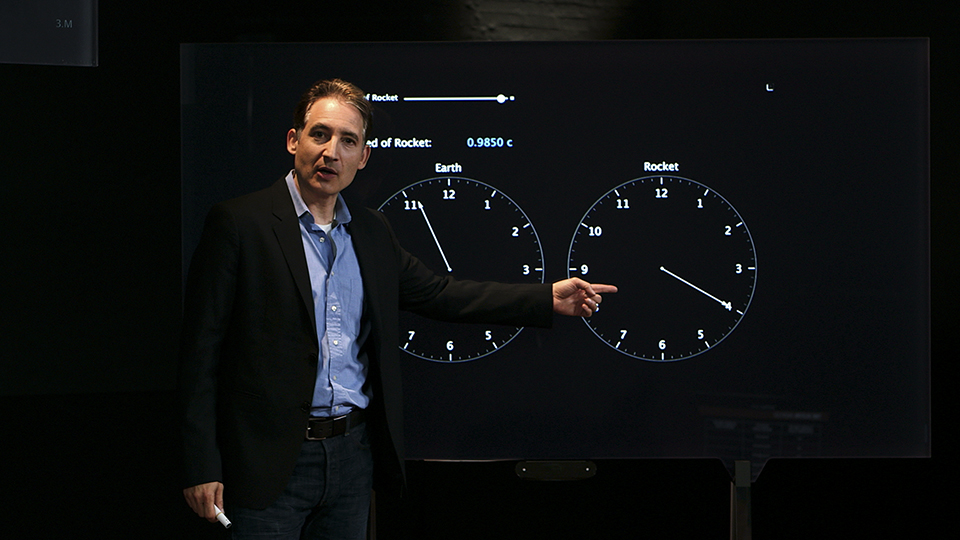 The two courses will both focus on special relativity, but are separated according to the amount of math used. They will be taught through a combination of short explanatory videos and longer video lectures accompanied by interactive assignments and exercises aimed at mimicking a classroom environment.

"Science is the future, but science is also a difficult subject," Greene said. "That makes it in my mind an ideal subject to be presented in a new way in which abstract ideas are made visual and intuitive through interactive explorations."

By making the material available in multiple formats, Greene said he hopes to attract people of all kinds of backgrounds to World Science U.

"On the one hand, a teacher in a classroom can use these materials as a kind of digital textbook, if you will, where they can have students go through the standard material that they would have assigned, but now the experience is much richer. ... It's a textbook come to life," he said. "The other way that I envision it being used is for the person who doesn't have access to a university classroom, who isn't enrolled in a college or university for whatever reason. ... They will be able to jump into fascinating material on their own with someone who is taking them by the hand the whole way through."

Janna Levin, an associate professor of astrophysics who works closely with Greene, said that while there is no replacement for person-to-person interactions, online courses like World Science U can help introduce complex topics to people who might not otherwise have the time for traditional courses.

"I do believe that this is a rapidly changing landscape, and the impact could be large for those who don't necessarily want to commit to the master level but still want to be a part of the conversation," she said. "They would be able to have access to these amazing ideas because are so nationally, socially, and politically transcendent, and they can all have a very unifying effect."

Levin currently teaches a course on Einstein's theory of relativity at Columbia and plans to supplement her own curriculum with some of Greene's videos.

"I think that even if you're an expert, you learn from other experts, as there's always a little nuance in the way that something is said or presented that you can acquire," Levin said. "Visually, I think that they have real strengths and that there is some really tremendous visual information, and visual information just goes right into your head."

Ronny Schmitz, CC '16 and an astrophysics and mathematics major, said she sees herself using the videos as a complement to her schoolwork. Schmitz said she currently uses the Massachusetts Institute of Technology's OpenCourseWare courses to help with some homework.

"Having an outlet through which we can see everything in a friendlier, animated version will assist us, as it will be interesting to see what we're learning on this website as a side course and to be able to dabble in it," she said.

"When you see all of these abstract ideas in diagrams and in small animated clips, it really enables you to see beyond the equations and get in touch with the nature behind it, which is how it was originally intended to be understood, rather than just rigid, steel equations," she said. "With visual representation, those equations become beautiful explanations for how the world works."