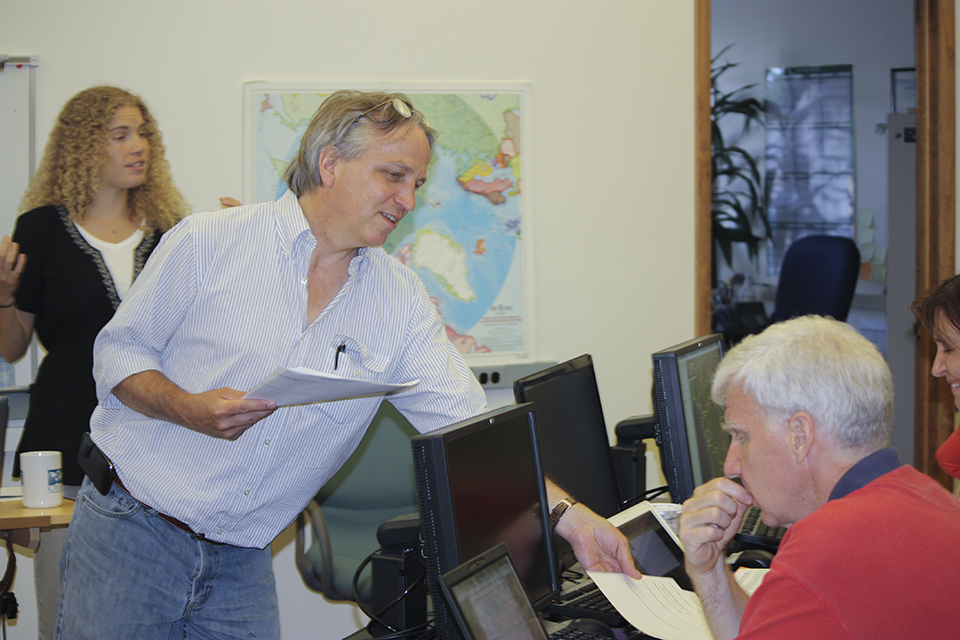 Mark Becker, a researcher at the Earth Institute, died in a car accident on Feb. 26. Colleagues and students remember his enthusiastic and adventurous presence on campus.

Mark Becker, the leader of the Geospatial Applications Division at the Center for International Earth Science Information Network, died in a multi-vehicle car accident in New Jersey on Feb. 26. He was 53.

Students and faculty who worked closely with Becker remember the researcher and professor as an enthusiastic environmental activist and a powerful teacher who was devoted to his work.

"All of us at CIESIN are still in shock about this sudden and tragic loss," Robert Chen, the director of CIESIN, said in an email to the Earth Institute faculty. "Mark was a core member of the CIESIN family and a valued collaborator with many people at Columbia. ... He cared deeply about his work, his colleagues and students, and the environment, from local to global."

Becker joined CIESIN 15 years ago and spent his career as a geographer focusing on public health and the environment.

"He was one of the first employees here [at CIESIN] at Columbia and crucial to its growth and success," Marc Levy, deputy director of CIESIN, said.

He also ran the Geographic Information System for the University, which uses geographic location to analyze information.

Levy said Becker stood out as a researcher and a teacher.

"He had a very unique ability to reach anyone and effectively teach them what they were most willing to learn about spatial analysis," Levy said. "He was very proficient in all the latest technology. ... At the same time he had this very old-fashioned kind of explorers' mentality that you associate with geographers of another century."

Becker was also the co-director of the Bergen Save the Watershed Action Network, an organization that works to preserve the Hackensack River watershed in New York and New Jersey. He worked with co-director and partner Lori Charkey for more than 30 years.

Becker taught a number of courses at Columbia, including one this semester on spatial analysis for sustainable development. He was also an adjunct professor at Bard College.

Perihan MacDonald, CC '14 and a sustainable development major, took two courses with Becker and said that he got her excited about GIS software.

"There's just something about him as a professor that you don't see a lot, where he just really loved teaching the subject. That enthusiasm transferred to his students," MacDonald said.

MacDonald almost didn't make it into the first class she took with Becker, as it had reached its cap. After persistence on MacDonald's part, Becker let her stay.

"He explained things really well," MacDonald said. "He brought his enthusiasm to the class. It made me excited to go to class."

Levy also said that Becker left a lasting impression on his students.

"It was a very common occurrence for me to run into somebody at a meeting, conference, somewhere, someplace that had worked with Mark—it was often former students," Levy said.

"They would invariably tell me how much they had learned from him, and how good he was at taking very complicated material and making it accessible to people with widely divergent amounts of technical training," he said.

"It was a great way to see what we were doing could translate into real world problems," MacDonald said of Becker's involvement in SWAN.

Becker had recently returned from a trip to Antarctica with Charkey, where they researched the effects of human actions on climate change.

Levy said that the trip allowed Becker to experience "the glory and the grandeur of the landscape" while informing people about climate change.

Becker's passion for nature was also displayed in everyday life.

"We were in class one day and I looked down and next to my computer there was a giant centipede," MacDonald said. "I started freaking out ... and Mark just very calmly interrupts the entire class, walks over, takes a manila folder, scoops it up, and walked up two flights of stairs to put it outside."

"Anybody else would have just killed it. It was just one of those little things that just speaks to his character," she said.

According to NorthJersey.com, Becker is survived by his partner Lori Charkey, his mother Edith Becker, his brother Michael Becker, and his two sisters, Patricia Shilling and Terri Foschini.