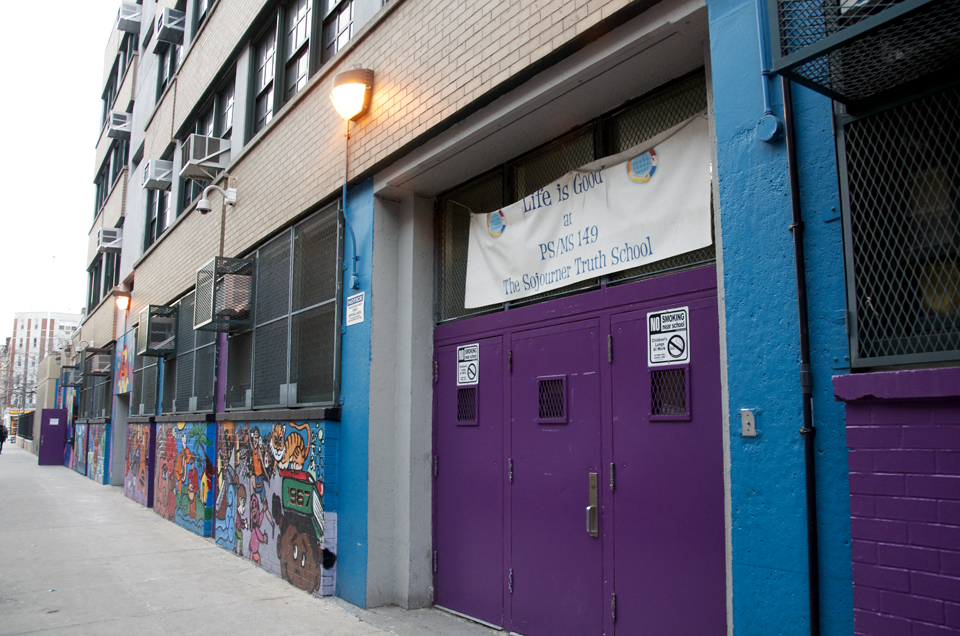 Despite city education officials reversing an earlier decision to co-locate a third charter school at P.S. 149, parents say that the school could still use more space for its special-needs students.

The Department of Education announced on Feb. 27 the decision not to co-locate P.S. 149 on 117th Street and Lenox Avenue with the Harlem Success Academy IV charter school as part of de Blasio's and the DOE's review of impending co-locations approved by the Bloomberg administration. The school building already houses two charter and two public schools.

"It was a victory for the community," Noah Gotbaum, a member of Community Education Council 3, said. "The co-location was about to evict dozens of autistic and severely emotionally disturbed children from their own building."

P.S. 811 and P.S. 149, the two public schools on the campus, serve special needs students. The four schools share the cafeteria, the gym, and the auditorium.

But even though parents at the school are happy that the decision to add a fifth school was reversed, they said that the schools are already space-crunched as it is.

"I'm happy that it's not expanding, but at the same time I find it bitter because they're still taking up space that we don't have," Karen McLean, secretary of the Parents and Teachers Association at P.S. 149, said.

"I'm glad Bill de Blasio has brought light to the situation that's going on there, but we need space," said Sonya Hampton, mother of a seventh grader and the president of the P.S. 149 PTA.

"They don't have the space to get their therapy," McLean, whose twins receive special services at the school, said. "They share room. ... Either they're on top of the stage, or they're in the PTA room."

"It creates a competitive atmosphere within a building, which creates winners and losers," he said. "And the public school is going to end up losing because the charters have more resources."

In the announcement last week, de Blasio and School Chancellor Carmen Farina said that nine planned co-locations, including three for Success Academy charter schools, were reversed. At the time, Farina said that the decisions reflected the department's new emphasis on community input.

"Today, we are turning the page on the approach of the past. We are going to listen and be responsive like never before, and that will be reflected in everything we do," she said in a statement.

Supporters of charter schools were not taking news of the co-location reversals sitting down this week. Success Academy's 22 schools in Harlem closed for the day Tuesday as a caravan of buses carried parents and students to a pro-charter-school rally in Albany. CBS New York reported that more than 3,000 showed up to the protest, which coincided with a rally in favor of de Blasio's plan to expand universal prekindergarten and after-school programs with state funds.

Hampton said that while charter co-locations initially involved input from and communication with the public schools affected, more recent decisions like the one at P.S. 149 happened with little community consultation.