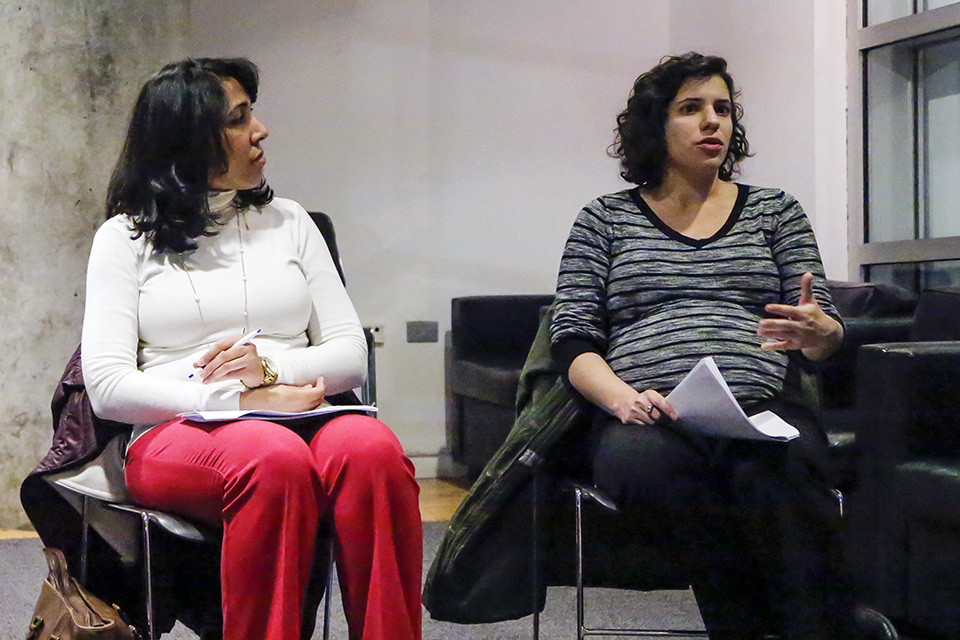 At a long-awaited town hall discussion on Thursday evening, students had the chance to voice their concerns to administrators regarding Columbia's sexual assault and gender-based misconduct policy.

The town hall, which was promised by University President Lee Bollinger in February in response to months of student activism and recent media attention, was moderated by Interim Dean of Student Affairs Terry Martinez and Caitlin Lowell, CC '15 and a member of the Students' Coalition Against Sexual Violence, and University Senator Matthew Chou, CC '14.

Students, faculty, and administrators filled 103 Jerome L. Greene Hall—and some students were turned away because the room had reached its capacity of 122.

"We want to answer your questions," Columbia College Dean James Valentini said. "All of us come to this discussion with our own strong concerns and views. We all care deeply about this issue and this community, and we're here to listen so we can collectively do a better job at making this campus environment somewhere we want to work and live and study."

[Related: A Q&A with administrators on recent changes to sexual assault adjudication policy]

While the first half of the almost two-hour session focused on administrators explaining and clarifying the policies and resources available to students on campus, the second half allowed student questions from both the audience and an anonymous comment form.

The town hall was originally scheduled to end at 6:30 p.m., but administrators ultimately decided to answer the remaining questions from students still standing at the microphones.

Many of the questions from audience members focused on the Rape Crisis/Anti-Violence Support Center, which has been criticized for its location on Barnard's campus and for not being open 24 hours.

Seward said that administrators are looking for a new location for the RC/AVSC. Students say that its location in a Barnard dorm makes it difficult for Columbia students to gain access since they have to present their ID and explain where they're going.

"We really understand the concern expressed that non-Barnard affiliates can have a disarming or unnerving experience that creates a barrier for them in seeking treatment," Seward said.

Seward also added that Health Services will keep the center open during NSOP—a concern often raised this semester and at the town hall.

Still, administrators had less definite plans when asked about keeping the center open 24 hours per day and staffing it with professionals, rather than volunteers.

"We hear you," Seward said, adding that administrators will look into the issue if they feel it is what the bulk of students on campus want.

That question was followed by snaps from audience members in support, which happened a few times throughout the town hall.

Martinez said that administrators were looking into that policy, but said that at Wednesday's fireside chat, Bollinger said he did not believe the University was violating the policy.

Zoe Ridolfi-Starr, CC '15 and a member of No Red Tape Columbia and the Coalition against Sexual Violence, who asked the question of Bollinger at the fireside chat on Wednesday, said she wasn't satisfied with administrators response at the town hall.

"I would characterize it as a nonresponse. They basically said that it wasn't a legitimate question because they had a lawyer look at it and said that it was fine," Ridolfi-Starr said.

Later, when pressed again, Dunn said, "If you look nationwide, I don't think anybody is sure they're Title IX compliant."

Students also asked questions about the reporting and adjudication process for cases of sexual assault and gender-based misconduct, from how hearing panels are chosen to why deans of individual schools have the final say on appeals cases, especially considering the potential conflicts of interest that can arise from the deans' other responsibilities at the school.

"There is absolute consistency in the appeals process," Henry said. "The dean of the individual school is the highest authority and they're capable of looking down on the situation and really seeing the whole package."

Henry said that deans who were appointed mid-year still made these decisions, even if they had yet to receive the proper training.

"The idea that someone would not receive any training and then be determining these serious, urgent, deeply important questions that affect student lives with absolutely no training is simply ridiculous and, to me, demonstrates such a lack of regard for student safety," Ridolfi-Starr said.

When pressed further about the conflict of interest, Henry said that the question seemed to "undermine the credibility" of the deans of each undergraduate school, who—though in attendance—did not speak to students during the event after they introduced themselves.

Students also asked about consent workshops during NSOP and how administrators are working to make those more effective.

Rivera said that her office was looking to pilot three sessions of consent workshops with first-years—instead of the usual one session—during the upcoming year, and that administrators were receptive to other suggestions from students.

Martinez encouraged students to check the town hall website that was unveiled at the beginning of this semester, where she said new information about the issues at hand will continue to be posted.

"We're committed to making sure you get regular updates," Martinez said. "This is a collaborative effort and we want you to be involved."

The session was anonymous unless students gave explicit permission to be quoted. Students who made their comments on the record said they were happy that the conversation occurred with administrators, but that they would like to see more.

"I felt like administrators were very receptive," Katharine Celentano, GS '14, said. "Having this conversation is important."

"I'd really like to emphasize that while it's great to have administrators listening to student concerns, I personally came away wanting to hear a little bit less 'We assure you,' and a bit more more 'We're hearing you and listening to you,'" Bob Sun, CC '14 and Columbia College Student Council vice president of policy, said.

"I'm really thrilled by the turnout—people were waiting in line to get in," Sejal Singh, CC '15 and president of the Columbia University Democrats, said. "I'm hopeful about conversations going forwards, and I really want to emphasize that this is the beginning, not the end. We're pushing to hold more of these and we're hoping the administrators came out of this with some really valuable suggestions."

"Nobody was really expecting people to be able to make decisions up there immediately in front of us," Ridolfi-Starr said. "But I think a lot of students will be watching very carefully how these conversations play out—so whether these administrators take the serious and urgent concerns that students raised tonight and do bring those back to conversations."

"A lot of the frustrations on this issue are all the conversations about...how to have other conversations, and no changes are being made when this is an issue that makes students unsafe every single day," Ridolfi-Starr said.