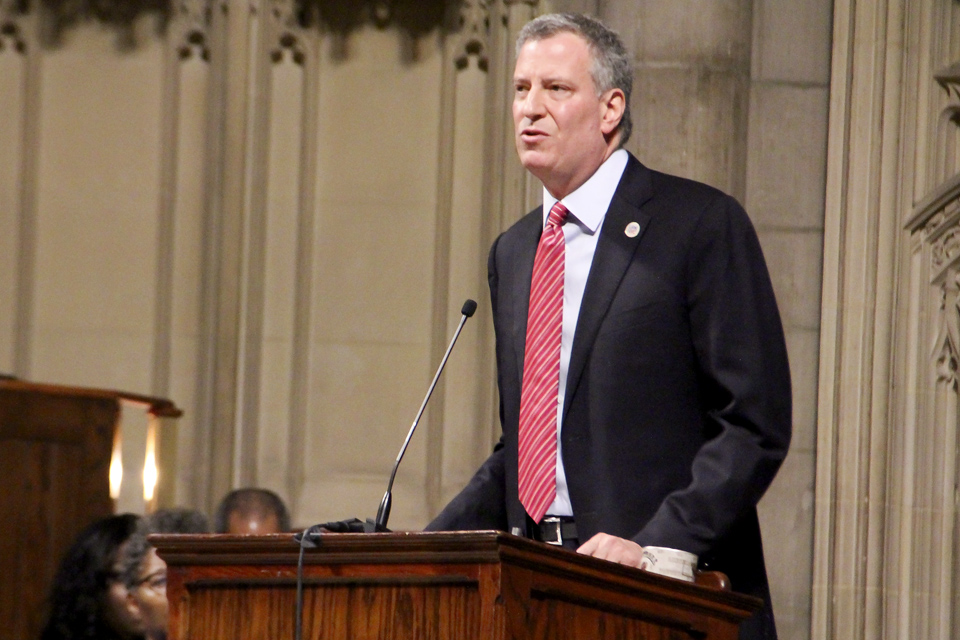 Mayor Bill de Blasio called for charter-school advocates to work with the city to improve the education system at a speech in Riverside Church Sunday.

In the speech, de Blasio said that while he is not against charter schools, he does not want the expansion of charter schools to push out other students. The mayor has come under fire from pro-charter groups in recent weeks for attacking charter school expansions.

Last week, parents of students at Success Academy Harlem 4 on 113th Street and Frederick Douglass Boulevard filed a lawsuit against the city after the Department of Education overturned a Bloomberg-era agreement that would have allowed the school to expand into a public school building. Parents of the public school students sharing the building said that the expansion would squeeze students for space.

"There's a charter school with 194 children. It's a good school doing good work, and we are going to make sure those 194 children have a good home this year. But we will not do it at the expense of our special education children," de Blasio said about the school.

"I will reach out to all of the children—in traditional public schools, in charter schools, in religious schools," de Blasio said. "They are all our children, they all deserve a solution."

De Blasio also said that the city's education system is in a "crisis," with vast disparities between racial and socioeconomic groups. He blamed politicians and policymakers for failing to see the root causes of the problem.

"It's all of us in public life who haven't measured up. And by the way it's been for decades, and it's been bipartisan, a sad universal reality of not reaching out and fixing those root causes," he said. He likened bringing together different education groups to the way different groups responded to the East Harlem building collapse two weeks ago.

De Blasio said that holding the speech at Riverside Church was a strategic and historical choice.

"This stunning church, this extraordinary place, has defined the progressive vision for so long. It has fueled and energized progressive movements here and around the world," de Blasio said, later alluding to former South African President Nelson Mandela, who spoke at the church after his release from prison in 1990 and again in 2005.

Rev. David Schilling and Columbia anthropology professor Elaine Combs-Schilling, both members of Riverside Church since 1983, said they felt very positively about the speech.

"It was almost like a theology of inclusiveness, and that's what this church has been about for a long time," Schilling said.

Combs-Schilling said she liked de Blasio's idea of having charter schools and public schools work together.

"They should not be competing with each other. [Charters] have to be feeders to change the whole system," she said.

Ocynthia Williams, who works with the education advocacy organization Alliance for Quality Education as a parent leader, said that the speech motivated her to keep working.

"I thought it was a great speech.  The failures are not our children failing, it's the adults," she said.

Catalina Arango watched the speech from one of the front pews with her three-year-old daughter Caelnne in her lap.  She said that the prospect of having to pay $1,500 per month for private pre-K is daunting.

"With a three-year-old, I'm very excited about the concept. It makes a huge difference that we could actually have a public option," she said.