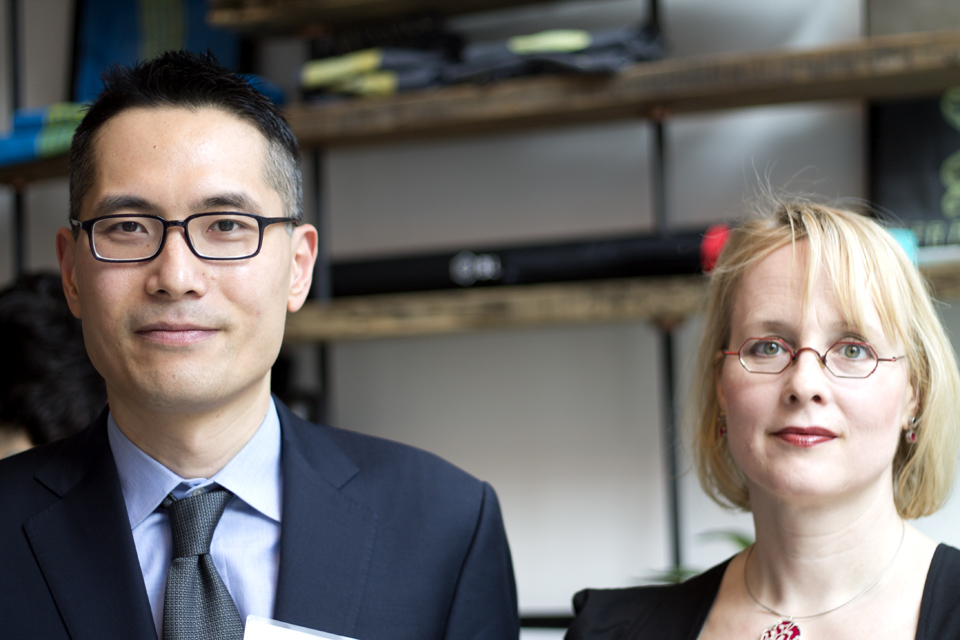 The 19 companies housed in Harlem Biospace Incubator, founded by Columbia professor Samuel Sia (left) and his wife Christine Kovich, presented their organization's projects at a Demo Day event on Monday.

West Harlem scientists, politicians, and professors are busy turning their neighborhood into a haven for biotechnology start-up companies.

At least, that was the sentiment at Monday night's Harlem Biospace Demo Day, during which the 19 companies housed in the incubator, presented posters and spoke with guests about their projects.

"The idea is that this is something a lot of us would like to see happen in West Harlem," said Sam Sia, Columbia professor of biomedical engineering and co-founder of the incubator, which opened last December as a space for biotech companies to grow their companies in a shared space.

Sia, who founded the space with his wife Christine Kovich, said that the space, which includes lab space, work stations, and space for shared equipment, is unprecedented because it is "bringing together economic development, community leaders, and science."

Anitha Jayaprakash, who is working on her Ph.D. at Mount Sinai Graduate School of Biological Sciences, helped create Girihlet, a company "developing mitochondrial DNA based biomarkers for cancer and developmental disorders," according to the poster describing the company.

"We had this idea in 2012 but there are so many obstacles. Our main thing was we didn't want to leave New York," Jayaprakash, whose company is housed in the biotech space, said. "These six months gave us a great place to explore. The access you have to other people and the culture is uncomparable."

Kyle Kimball, president of the New York Economic Development Corporation, which has provided funding for the space, spoke at the event along with Manhattan Borough President Gale Brewer, GS '97.

Brewer highlighted her nine years spent on the Committee on Technology in the City Council.

"I'm a big techie," Brewer said. "I've always pushed for more jobs in all of the technology sector."

Sia addressed the packed house of professors, investors, EDC employees and community leaders, saying that of the 19 companies, seven of them have secured over $100,000 in funding from outside investors.

Kimball, who was appointed in January by Mayor Bill de Blasio, said that he hopes to foster a broader community of biotech entrepreneurship in New York City.

"We've thought a lot about the bioscience space in particular because we think New York City is really uniquely positioned to be a leader in this industry. We really have a lot of the great building blocks to be a world leader in bioscience: pharmaceutical companies, biotech companies, academic science, academic medical centers, the venture capital community," Kimball said.

Henry Wu, CC '86 and founder of Theranostica, which is developing ways to use omega-3 fatty acids to diagnose and treat chronic inflammatory diseases, said that he came across the opportunity for funding through its connection to Columbia.

"I flipped through the Columbia alumni magazine that I get and I saw Sam Sia's picture," Wu said. "I always feel like there is no room for entrepreneurship in New York City. You have to go to California or Boston. This [Harlem Biospace] has allowed me to do what I want to do without moving to California."

Kovich is working on a second project within the biospace called HYPOTHEkids, which introduces K-12 students to science subjects through various programs including an in-school and after-school program at the Teachers College Community School and a summer camp for kindergarten to fifth grade.

"Nothing is dumbed down. They are learning about magnetism, acids, and bases," Kovich said of the classes which are just offered to TCCS first graders but will be expanded to other grades next year.

"We want kids to love science and to be prepared for the biotech community," she added.

City council member Mark Levine, who arrived later to the event, said that he sees the space as a positive influence on West Harlem.

"It has the potential to be great for the neighborhood particularly if we can get young people to be interested. My mission would be to have strong ties between this incubator and the broader community," Levine said.