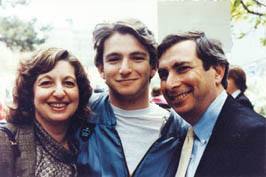 Dan Futterman, CC 89, will speak at Columbia College Class Day on May 20. Futterman, pictured here with his parents Linda, BC 62, and Stanley Futterman, CC 61, majored in English and comparative literature.

The annual ceremony will take place on the South Lawn on May 20.

"We're very excited for him to come and speak," Conan Cassidy, CC '14 and Columbia College Student Council class of 2014 president, said. "Most of the class wanted someone in the entertainment industry or something like that."

According to Cassidy, a committee of the class council executive board and 15 other student representatives decided on six finalists, including one non-alumni speaker, that it then presented to the Class Day committee, which includes administrators, alumni, and students.

Also known for his work as an actor, Futterman appeared on Broadway in "Angels in America" by Tony Kushner, CC '78, and starred in the 2007 film "A Mighty Heart" with Angelina Jolie.

Futterman, who majored in English and comparative literature at Columbia and was involved with student theatre on campus, has remained connected to his alma mater, writing parts of the screenplay for "Capote" in Butler Library. The class council will also be screening Capote in Lerner Cinema on Friday at 7 p.m.

"We're excited Mr. Futterman will deliver the keynote address to the CC'14 graduating class as he is not only an accomplished screenwriter and actor, but also someone who can speak to and connect with our experiences over the past four years at Columbia," Cassidy said in his email to seniors announcing the speaker.

"As we prepare to head out from Columbia with all the excitement, nerves, tears, what-am-I-doing-with-my-life, and uncertainty that graduation brings, we know that the words of advice from someone who sat in the exact same spot on Columbia's campus 25 years ago will stay with us as we move on to exciting new experiences," Cassidy said in the email.

"We are very proud of Dan's accomplishments as an actor and a screenwriter, and all our graduates are, I am sure, looking forward to hearing words of wisdom from such a talented and creative alumnus," Columbia College Dean James Valentini said in a press release.

Students interviewed Monday had varying reactions to the announcement.

Damaris Giha, CC '14, said that she's excited about Futterman because she's hoping to pursue a career in film.

"It will be really encouraging to hear from a Columbia alumni who has entered and succeed in that world," Giha said.

"It sounds like an interesting, cool choice," Alexa Semonche, CC '14, said. "I haven't seen the movie Capote, so I'll have to watch it."

"I think that Columbia should choose someone who's not necessarily from Columbia College," Natasha Merali, CC '14, said. "I think that it's time that they branch out and reach out to so many people who are inspiring, and the students deserve to hear them speak."

Correction: An earlier version of this story said that the student committee voted on three finalists out of six to present to the Class Day committee. They actually presented all six finalists to the committee. Spectator regrets the error.