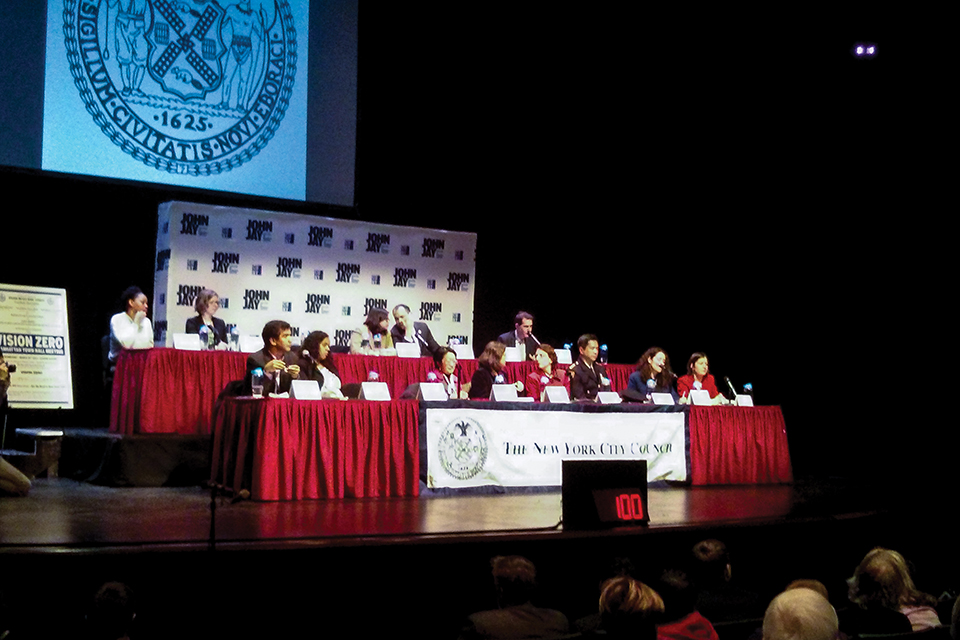 Held at John Jay College of Criminal Justice on 59th Street and 10th Avenue, the event was part of a five-borough tour planned by the City Council to solicit ideas from city residents for Vision Zero, the initiative to reduce traffic fatalities launched by Mayor Bill de Blasio after a string of pedestrian deaths earlier this year.

Despite sharing a general concern about the need to improve safety, attendees at Wednesday's town hall—numbering more than 350—expressed a diversity of views about the best way to achieve that.

After coming under fire for cracking down on jaywalking  in January and February, representatives from the New York Police Department said that the police plan to focus on education before enforcement.

"The areas where we are going to specifically target are going to be speeding summonses, failure to yield to pedestrians, disobeying stop signs, and using your cell phone.  We're going to do education as much as we can before we do enforcement," Thomas Chan, chief of the NYPD Transportation Bureau, said.

Some residents, however, spoke in favor of having a stronger police presence.

"I think if there was enforcement by the police officers in the form of points and very high fines, that would put a big chilling effect on all those cars that are running red lights," Leslie Friedland, an Upper West Side resident and mother, said.

In regards to bicyclist safety, cycling advocates at Wednesday's meeting said that the city should shift the blame to drivers, while others called for increased enforcement of cyclists violating traffic laws. Several speakers even proposed laws that would require cyclists to pass a test before they could ride in the city.

Richard Conroy, education director at Bike New York, was one of the many cycling advocates who proposed an idea for involving bicyclists in Vision Zero.

"We stand ready to partner with DOT [Department of Transportation], taxi and limo commission, and NYPD on training programs," Conroy said.  He proposed a mandatory bike-safety class for all sixth graders.

City Council Speaker Melissa Mark-Viverito, CC '91, who represents parts of East Harlem and the Bronx, added that in addition to focusing on education, the city should look at physical changes to streets, which can have a double benefit.

"In my district, I've been an extremely strong supporter of protected bike lanes. When you have the protected bike lanes, it also does afford additional safety to some of our seniors," she said, referring to how narrower streets with bike lanes give pedestrians more visibility and allow them to cross the street faster.

A DOT presentation that started the meeting mentioned the importance of street and intersection redesigns in improving pedestrian safety, which the agency said can reduce fatalities by 20 to 80 percent. The DOT plans on renovating 50 locations this year, including the notorious intersection of 96th Street and Broadway.

"Even if you're in the right, you're not going to be in the right if you are run over," he said. Leland also reiterated an oft-repeated argument that the city should better advertise that right turns on red lights are illegal in New York City.

DOT Commissioner Polly Trottenberg said that her department's approach will be to make New York City an accessible environment for disabled and elderly residents.

"Audible pedestrian signals are an important tool, and we will expand our use of them as resources allow, as well as explore other treatments that make streets even safer for all New Yorkers," Trottenberg said.

Upper West Side City Council member Helen Rosenthal took time out of her introduction to thank Community Board 7.

"Community Board 7 has worked tirelessly on this issue. The community board has thought about these issues, traffic safety, what to do with the bike lanes coming in, for years," Rosenthal said.

Community Board 10 member Maria Garcia said that any plan should bring together both local and citywide parties.

"How do we better connect the freight and commercial business communities to the neighborhoods that they move through?" she said. "There really is not a systematic approach for connecting CBs, agencies, and programs."

Council members present on Wednesday said that the success of the event lay in hearing ideas the city may not have previously thought of.

"As chair of the health committee, I look at Vision Zero as a public health issue as well. Many times, local community boards, tenant associations, you are the ones who know where the trouble spots are," City Council member Corey Johnson, who represents parts of Midtown West, Chelsea, and the West Village, said.