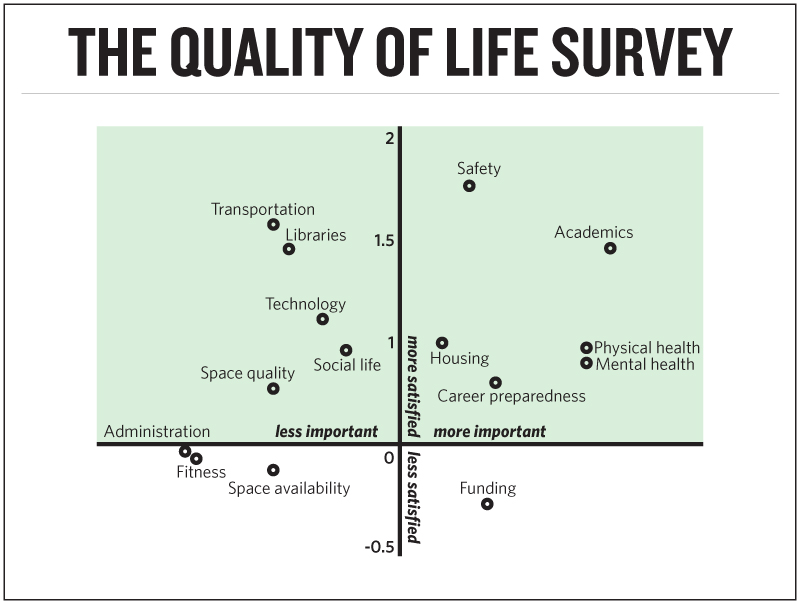 The University Senate released a list of recommendations from its quality of life survey conducted in April 2013. Respondents rated their level of satisfaction with various aspects of the University and ranked them according to importance.

The University Senate released a list of policy recommendations from its first quality of life survey on Sunday night, nearly a year after the survey was administered in April 2013.

Among the 28 recommendations mentioned in the 84-page report are ideas such as converting existing buildings into additional housing after schools move to the Manhattanville campus, expanding special interest housing options, allowing food into Butler Library, and examining the relationship between Public Safety and students of different racial and ethnic backgrounds.

Satisfaction with funding, which includes financial aid, scholarships, and grants, was an area that was reported to be below average for all groups. The report said that funding was "especially distressing" for non-Ph.D. graduate students.

"Even though Columbia is wealthy in many ways, we still have a many ways to go in terms of building up the same capacity that our major competitors—Harvard, Yale, Stanford —do have," University Senator Matthew Chou, CC '14, said.

Students across all schools also reported below-average satisfaction with the level of administrative bureaucracy. One survey comment published in the report said, "There is rarely anyone in a position of power around to talk to. The countless times I have been denied, ignored, or referred to a website/email/empty office/voice mail by bureaucrats here is infuriating to say the least. Deans and other people in positions of power need to have a stronger, more accessible presence on campus."

In response to dissatisfaction with administration, the report recommends publicly issuing a biannual report on the specific goals the University has for each semester and creating an organizational flow chart of the administrative structure.

Although some suggestions, such as creating more gender-neutral bathrooms and developing a global print queue to replace NINJa, are already being pursued by students and administrators, University officials said that the survey data will help them decide where to allocate resources.

"My team and I had an opportunity to review and discuss the results and found the data very informative," said Executive Vice President for Facilities and Operations Joe Ienuso, who is also working on increasing the number of gender neutral bathrooms. "I look forward to working with the Student Affairs Committee in the future to utilize the results to inform our services."

"This analysis will provide a path for clear policy recommendations and improvements in students' overall quality of life," Sharyn O'Halloran, chair of the Senate Executive Committee and a political science professor, said in a statement.

Akshay Shah, SEAS '14, and Chou—the co-chairs of the Student Affairs Committee—said the results identify a few key areas that the University should focus on.

"So the thing that's really great about this report is that it breaks down the survey dimensions that are most important to students, or the quality by dimensions, rather things that need preparation are funding, mental health and physical health," Chou said.

Shah and Chou will be presenting a resolution at the USenate plenary this Friday to propose holding a quality of life survey every two years.

Ramis Wadood, CC '16 and a senate staffer who helped write part of the report, said that the majority of the data analysis was done by students.

"We collected a lot of data—more data than we ever had about students in this University's history—and analyzing it. Obviously, tens of hundreds of hours have gone into analyzing the data that we received from the survey," he said. "I think that the only reason it took so long is because this is the first time that we're dealing with data this big and this comprehensive, this precise, that really expresses student's concerns."

University Senators Jared Odessky, CC '15, and Marc Heinrich, CC '16, said that while future surveys should be kept in the hands of students, analyzing data for the current report diverted resources from senate members and staffers. The two said that future surveys could outsource data analysis.

"Student Affairs Committee meetings should be dedicated to debating substantive policy, and our time in front of the full plenary sessions should be used to advocate for the big issues, not just report presentations," Odessky and Heinrich said in a joint statement.

Still, Wadood said it was important that the survey was spearheaded by students.

"I think that's very important that the analysis was done by students because, looking at the data, only students can faithfully and best represent what that data says," Wadood said. "Only we can bring about recommendations that the administration may not like but realize that they need to, because the data backs it up."