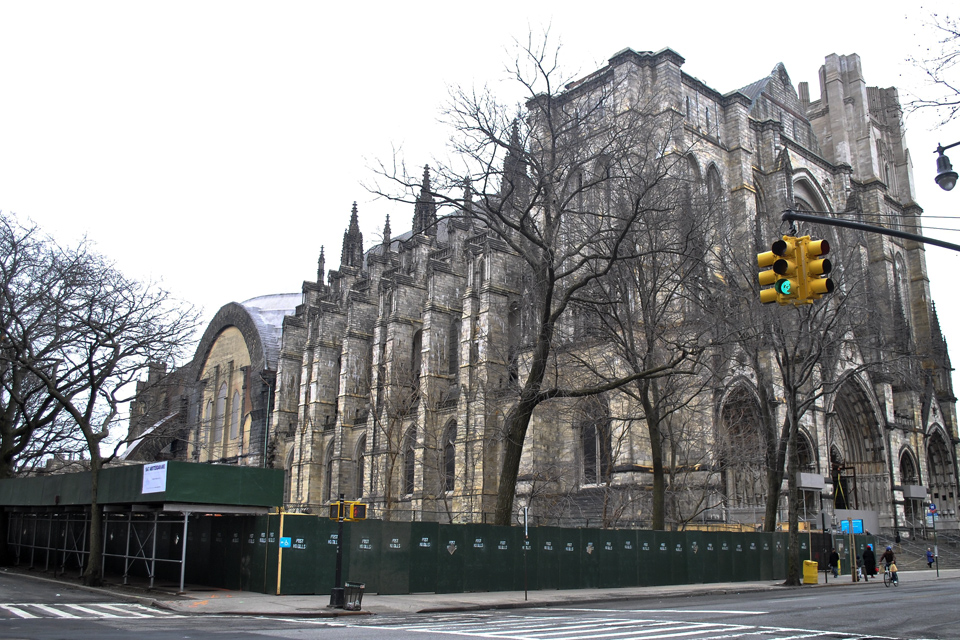 The Brodsky Organization, the developer for the planned apartments on the north side of the cathedral grounds, recently selected Breeze National to clear the construction site. Breeze National was previously involved in two deadly accidents on Columbia's Manhattanville expansion.

A controversial subcontractor has been selected to construct new condominiums next to the Cathedral of Saint John the Divine, bringing up long-standing tensions between cathedral administrators and the local preservationists who oppose the development.

After the cathedral officially signed the land lease last week with the Brodsky Organization, Brodsky selected subcontractor Breeze National to clear the site on West 113th Street. But preservationists are up in arms about the poor safety record and alleged criminal history of Breeze National.

In 2010, a worker at Columbia's Manhattanville expansion died after falling through improperly constructed scaffolding in an elevator shaft overseen by Breeze National. In 2012, another worker was killed and two others injured after a building on the Manhattanville site, also managed by Breeze National, collapsed. Furthermore, Tony Romano, Breeze National's former vice president, was convicted on federal bribery charges in 1988, while the Business Integrity Commission found ties between Romano and the Lucchese crime family in a 1992 trial.

Community members opposing the cathedral's development plans said they were appalled at the choice of contractor.

"It reflects the thoughtlessness of this entire project—that they would go ahead and do the project to begin with, to deface their own property, to mar this unbelievably beautiful architectural treasure," Laura Friedman, president of the Morningside Heights Historic District Committee, said.

"The community was struck by that tragedy, when a minority member of Breeze National was killed on one of their jobs," Brad Taylor, a member of Community Board 9, said. "Now we have the same developer two years later? It's just completely tone-deaf."

"It seems like a really strange choice by the developer of the church to have Breeze work on this project," said Harry Schwartz, leader of the Friends of the Cathedral of Saint John the Divine, an anti-development group. "Their record's just not good."

Preservationists oppose the cathedral's plan to construct apartment buildings on the north side of its campus because they say the buildings will block light from entering the cathedral and bring excessive traffic to 113th Street, which is also the entrance to the emergency room of St. Luke's-Roosevelt Hospital. Cathedral officials, however, say the project will bring in much-needed money for the maintenance of the church, which is the fourth-largest Christian church in the world.

"This exciting project by the Brodsky Organization will provide affordable housing for the neighborhood, extend our mission and outreach, and allow us to raise funds to take care of all the buildings that make up the cathedral complex, for the enjoyment of many people for decades to come," a cathedral spokesperson said. The spokesperson added, however, that the cathedral was not involved in choosing contractors now that the Brodsky Organization officially leased the land.

According to the plan, 80 percent of the apartments built will be market rate while 20 percent will be entered into the city's affordable-housing lottery. While no official agreement has been reached, Brodsky said in January that 35 percent of the project costs will be for minority-, women-, or locally-owned businesses.

Still, preservationists and community board members said that Brodsky is not being completely transparent about the details of the development.

Taylor said that Brodsky has not completed an environmental impact statement for the project, despite a November CB9 resolution requesting that it do so. Brodsky is not legally required to complete an EIS because the apartments do not conflict with any zoning regulations.

Friedman said the lack of a statement demonstrated that the company was ignoring the community's interests.

"The environmental impact statement is not just about the physical space, it's also about the impact this building will have on the community in general," she said. "We are shocked and appalled that they are not doing that after the specific request of the community board to do so."

In January, CB9 passed a resolution asking the Landmarks Preservation Committee to landmark the cathedral grounds with the exception of the north lot the apartments will be built on. Friedman, Taylor, and other preservationists opposed the resolution at the time because it still allowed for the development to take place.

"That's exactly what the landmarking is supposed to do—it's supposed to protect the entity, not allow development," Friedman said. "It's a bogus game that they're playing."