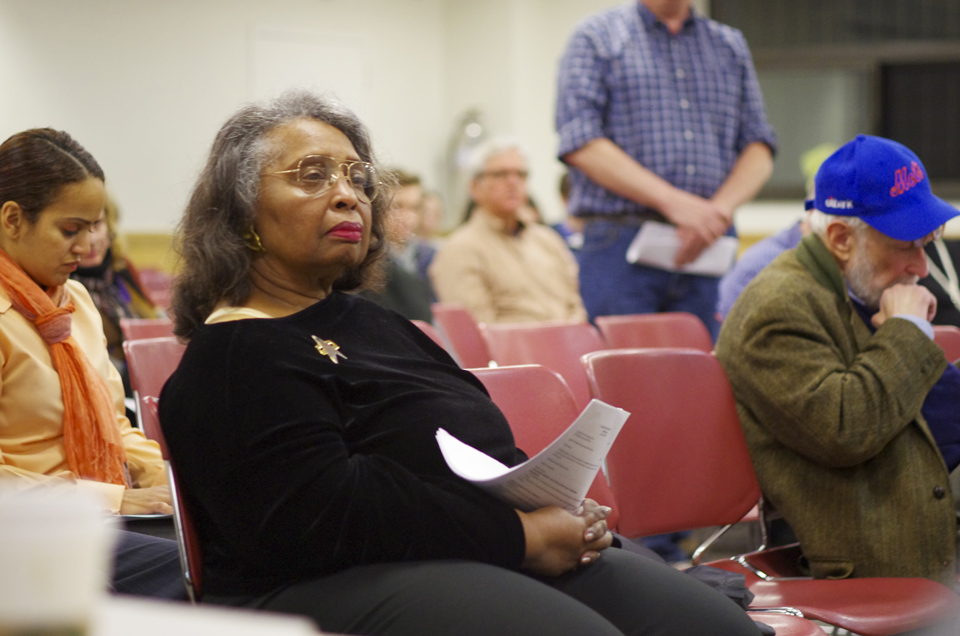 Stonehenge Tenant Association president Jean Green Dorsey said that it was not fair to prohibit rent-stablized tenants access to the gym in the Stonehenge apartment complex on West 97th Street, between Amsterdam and Columbus.

The State Assembly and City Council, with support from Community Board 7, have drafted legislation that would prevent landlord discrimination in city apartment buildings.

The call to action was spurred on by the recent controversy over a gym at Stonehenge Village, the apartment complex on 97th Street between Amsterdam and Columbus avenues, that only granted access to market-rate tenants and prohibited rent-stabilized tenants from using the facilities.

At Tuesday night's CB7 meeting, the board voted with 28 votes and one abstention to support legislation that would ban landlords from barring amenity access to residents based on their rent status.

"We have a great resolution that the housing committee has done on the use of amenities differently for rent-regulated tenants versus market-rate tenants," CB7 housing committee chair Nick Prigo, who authored the resolution, told the community board.

The bill introduced in the New York State Assembly by Linda B. Rosenthal would allow a landlord to be fined up to $25,000 if charged with tenant discrimination.

Dorsey said she appreciates the use of the fine as a monetary incentive.

"Her particular bill is extraordinary," Dorsey said. "So I am very, very grateful."

City Council member Mark Levine's bill is still in the introductory stage. He discussed his legislation with CB7 on Tuesday night.

"I've introduced legislation that would add a new class of protected citizens into human rights law so that the building owner could no longer discriminate against whether someone is rent-stabilized or market-rate," Levine said. "We feel this is an important step. We'll begin the legislative process. It's in the earliest stage."

The resolution asks the politicians to "amend the New York City Human Rights Ordinance to stipulate that all amenities in any residential building shall be provided on the same terms and conditions to every tenant and lawful occupant."

The community board's discussion around the resolution included questioning what the bill would consider equal treatment. Some board members were concerned that the landlord could ask the rent-stabilized tenants to pay extra by suggesting that the cost for the gym is already included in the market-rate rent prices.

"I assume there's nothing in it that interferes with the process of setting some reasonable fee for the usage of the facilities," said board member Jay Adolf. "My suggestion would be to enshrine some procedure so there's an objective methodology to determine what a reasonable fee is."

"There is a part of me that is absolutely horrified that this is still absolutely necessary. It horrifies me that once we started, it came out of the woodwork that people were being treated this way all across the city," Dorsey said. "It's not about black or white. It's about greed and arrogance. This is not acceptable. These laws need to be changed."