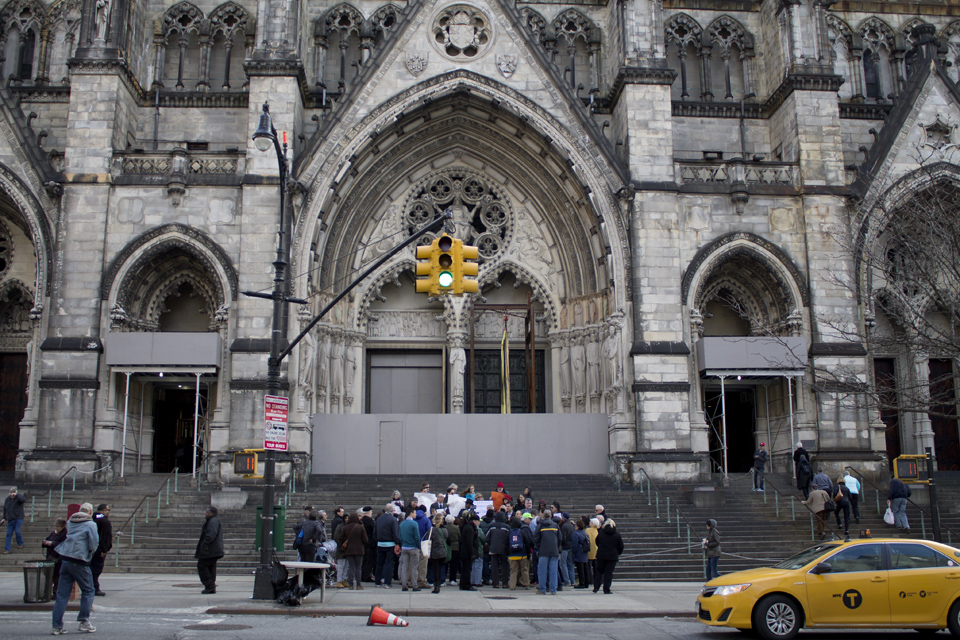 Protestors gathered in front of the Cathedral of Saint John the Divine on Saturday morning to oppose the construction of apartment buildings on the north side of the cathedral's campus.

Federal, state, and city officials joined local activists Saturday to protest the controversial residential development planned on the north plot of the Cathedral of Saint John the Divine's campus.

The group of nearly 100 protesters gathered under the morning shadow of the church's Gothic façade, holding signs and shouting chants like "Two, four, six, eight, do not let them desecrate."

The protest came a week after workers from Breeze National started clearing the cathedral's northern grounds near 113th Street for the 15-story apartment buildings planned by the Brodsky Organization. So far, trees have been removed and the construction site has been cleared.

"The unimaginable has happened," Laura Friedman, president of the Morningside Heights Historic District Committee, said. "Demolition, or should I say desecration, has begun."

Locals are worried that the project, announced in January 2012, will diminish Saint John the Divine's grandeur. Cathedral officials, however, have said that the money from leasing the land to developers will help pay for the church's operation and maintenance costs—in 2012, cathedral dean James Kowalski said that the cathedral was running a 10 percent deficit.

"What a legacy of shame the cathedral administration is bringing upon one of America's most beautiful cathedrals," Friedman said. "No other major cathedral would even think of doing this."

The new apartments would be the second residential development on the cathedral's property. In 2006, the cathedral signed a lease with developer Avalon Bay to build the 20-story Avalon Morningside Park on 110th Street and Morningside Drive. At the time, preservation activists also opposed the development, citing the lack of affordable housing in the building and the architecture.

Many elected officials, including Rep. Jerrold Nadler, CC '69, of New York's 10th Congressional District, voiced their opposition to the development.

"I am deeply concerned that the construction on the grounds of Saint John the Divine jeopardizes the historic nature of the cathedral's Close and will overwhelm the surrounding neighborhood," Nadler said. "I call on the church to work with the community to find an appropriate use for the space."

"It's unnecessary for this project to be moving forward, especially with so much community opposition," Perkins said.

"We need to challenge the notion that every square inch of open space in this city should be developed for luxury housing," Levine said.

Politicians also questioned why the church could not come up with other sources of funding—a common argument against the apartment buildings.

"The Episcopal Church is poor? What does that make the rest of us?" Perkins said. "There's something dishonest about their justification."

"If they want to be a for-profit real estate corporation, they can convert to one and pay taxes like you and me," O'Donnell said.

"The cathedral is a nationally treasured landmark," Levine said. "This is a church with the resources to stretch its fundraising arms globally. We would help them in that effort."

Cathedral finances aside, if the north plot is to be developed at all, local residents said they would rather see a community gathering space constructed—like a park or playground—instead of apartment buildings.

"Many years ago, the north plot was a soccer field," Noah Kaufman, a member of the 113th Street Block Association, said. "There are so many alternative uses for that space that would benefit the community."

Friedman said that she and other activists are pursuing the possibility of legal action to prevent construction.

Others said they hope this step will not be necessary.

"Saint John the Divine has been a great community partner for many years," longtime Morningside Heights resident Melissa Cooper said. "I hope those within the cathedral administration will respond to our concerns."