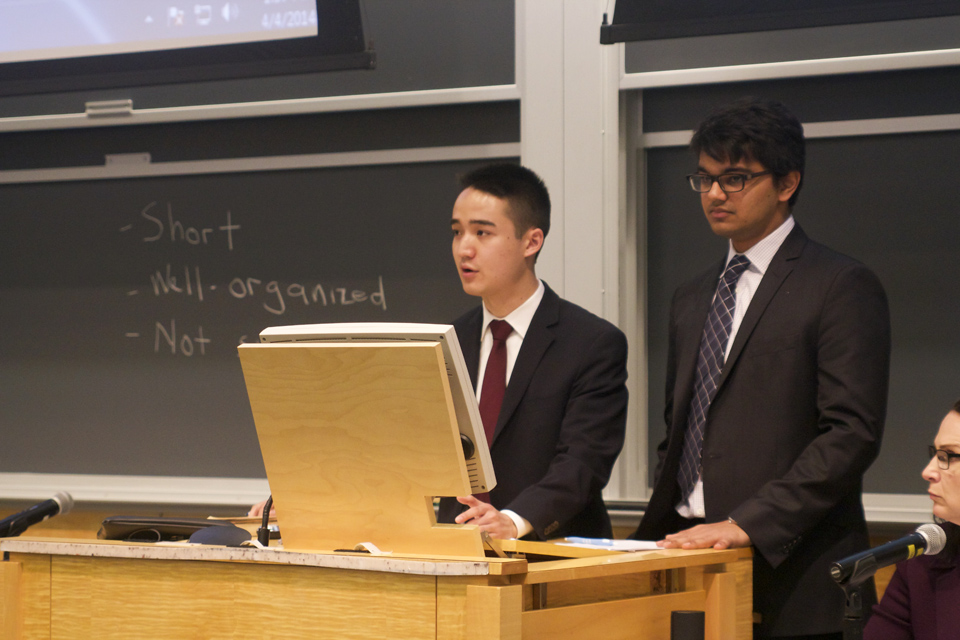 Student Affairs Committee co-chairs Matthew Chou, CC 14, and Akshay Shah, SEAS 14, presented a resolution that would institutionalize the quality of life survey to be conducted every two years at Friday's senate plenary.

The University Senate passed resolutions to amend the Presidential Advisory Committee on Sexual Assault and institutionalize the quality of life survey at its plenary on Friday.

The unanimously-passed PACSA resolution, which was presented by Student Affairs Committee co-chairs Matthew Chou, CC '14, and Akshay Shah, SEAS '14, will require the committee to have at least three students among its 13 members, have a list of members accessible to students through the PACSA website, and publish annual reports on the committee's activities.

"Students have asked for utterly reasonable things. Students should want something like this to be involved, especially on an issue of this importance," University President Lee Bollinger said at the plenary. "I hope they will respond favorably."

The three students will be nominated by the senate, and will include one undergraduate, one graduate, and one member of SAC. Other members will include three tenured and one non-tenured faculty. All members will serve two-year terms.

The senate also added a friendly amendment to balance the genders of committee members at the suggestion of Robert Brown, a professor of medicine at the College of Physicians and Surgeons.

Letty Moss-Salentijn, a professor of dentistry and the vice dean of academic affairs at the College of Dental Medicine, expressed her support for the quality of life survey but still questioned the feasibility of the biennial survey and her fear that it may cause a "survey fatigue" if administered every so often.

"We are reasonably confident that we can get this done," Shah said, adding that the senate has support from administrators. "When we were marketing the survey, we kind of sold the survey as a once-every-two-years, and having gone through that process and where we are now, I think it's important for us to hold true to that commitment."

Another concern raised in the plenary was the budget for the production of the report and whether it was financially feasible to hold it every other year.

Shah and Chou responded that it would cost around $3,000 every two years and 500 person-hours.

Although the PACSA resolution and the quality of life resolution took up the bulk of the plenary, the Advisory Committee for Socially Responsible Investing also presented a report on its progress.

The ACSRI, made up of four students, four faculty members, and four alumni, advises the University and its Trustees on ethical investments, reported on the Proxy Voting Guidelines of February 2010.

The guidelines made no mention of divestment from private prison companies or divestment from fossil fuels, issues brought forth earlier in the academic year by different student groups.

Courtney Minard, a professor in the School of International and Public Affairs, said that the ACSRI is currently weighing fossil fuel divestment.

"We are in the process of debate and discussion and we are not going to put deadlines onto decisions that are difficult," Minard said. "We don't meet as often as one would think we should because of regular schedules."

Barnard-Columbia Divest for Climate Justice and ACSRI will also host a panel discussion on Monday, April 7 at 7 p.m. in Earl Hall to listen to and address students' opinions on divestment.

Columbia College senator Jared Odessky, CC '15, asked Minard about how to address the concern of committee members having agendas and about the possibility of members "committing to not ever vote in favor of divestment."

"The committee has a pivotal role, but honestly, it's purely an advisory role to bring the best information to the trustees subcommittee," Minard said in response, adding that members come from a range of backgrounds.

Minard also remarked that the committee is committed to increasing transparency. The minutes of the committee are public, she said, and members are working to create other channels for discussion and dialogue.