Seniors gather for 40s on 40, 42 days before commencement

Seniors gather for 40s on 40, 42 days before commencement 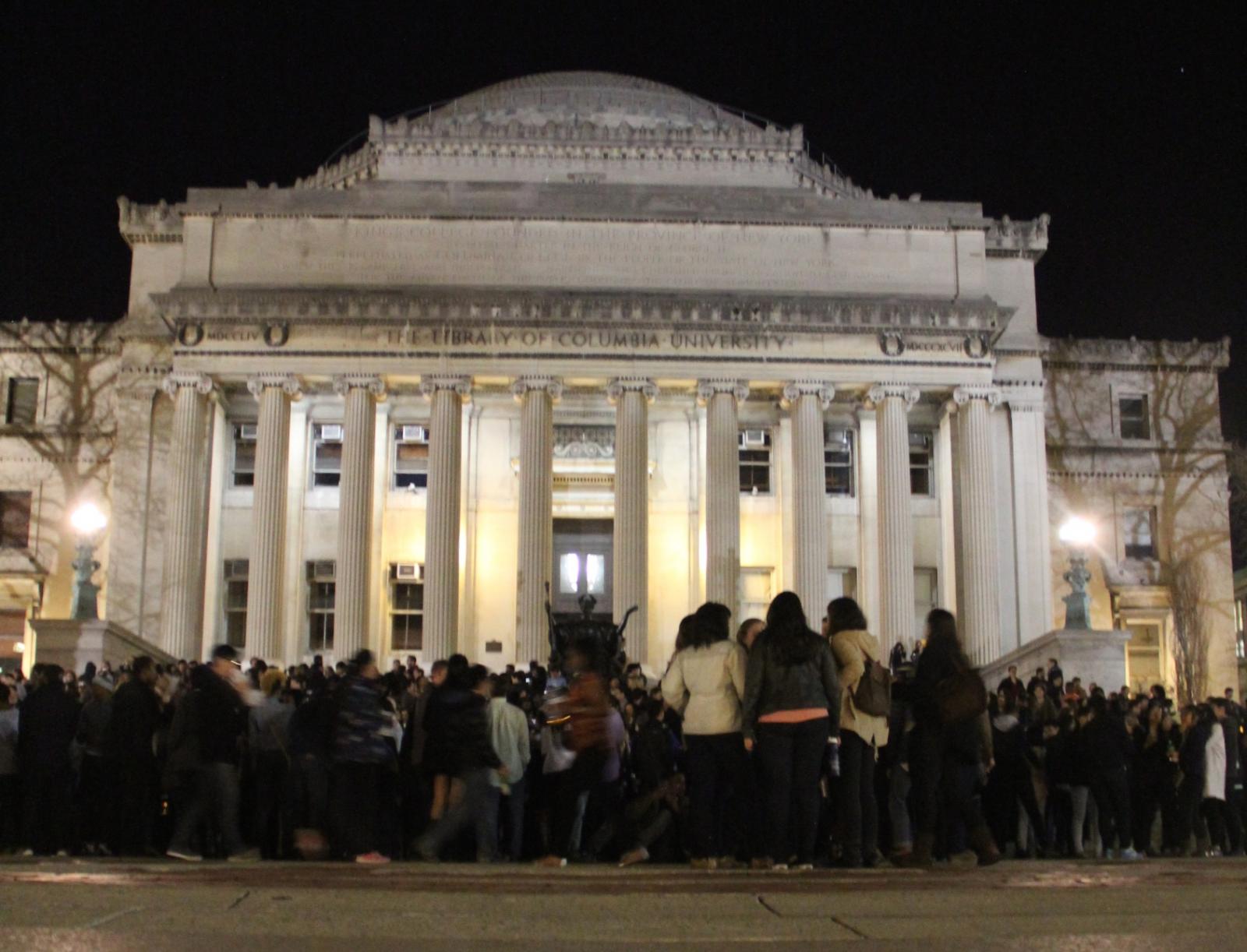 40s on 40, an annual yet unofficial event, brought seniors from all four undergraduate schools to the steps to drink together and reminisce in the early hours of Thursday morning.

Boisterous laughter, half-hearted chanting, and the occasional shatter of glass replaced the usual early morning silence on Low Steps last night, as seniors congregated to celebrate what will be one of their last Columbia traditions.

40s on 40, an annual yet unofficial event, brought seniors from all four undergraduate schools to the steps to drink together and reminisce, just 42 days ahead of the date they will again walk across those steps to graduate.

"It's hard to really put into words," Chris Perkins, CC '14, said. Standing near Alma Mater, he glanced up at Low Steps, taking in the scene of hundreds of his classmates standing together. "I'll always look back and know it all started at Columbia," Perkins said.

According to WikiCU, 40s on 40 started in the early 2000s as a casual daytime gathering on Low Steps. It became a school-sponsored event between 2007 and 2009, but moved underground again in 2010 after the student councils decided cancel the official 40s on 40 event due to high costs among other factors.

Brandon Luna, SEAS '14, also said the night made him think back to his freshman year.

"This is amazing," Luna said. "I'm seeing all sorts of people I haven't seen since NSOP."

But, for many, the event had them thinking about the end of their time at Columbia and the beginning of their post-college life.

"I'm looking for a place to sublet and a job, so it's kind of nice to just hang out here," Stephanie Mannheim, BC '14, said. Ema O'Connor, CC '14, said looking forward to graduation gave her perspective.

"It feels like you have the whole world pressing down on you, but you know how inconsequential you are in the long run," she said.

Feelings of solidarity were replete among seniors, especially as more of the class trickled onto the steps. As the clock approached 2:14 a.m.—a time selected in honor of their graduation year—the crowd gathered on the steps swelled in number.

"It's bringing us together," Scarlett Tohme, CC '14, said as she surveyed the crowd. "People say there's no community at Columbia, but look at this."

"I've had a wonderful four years," Jain-Cocks said. "We're all trying not to cry right now." But as 2:14 came and went, accompanied by a nearly complete rendition of Roar Lion Roar, the night began to take a turn for the raucous.

"Things are breaking, I can't find my friends," AJ Lugo, GS '14, said, adding that, despite the chaos, the night was a perfect metaphor for his years at Columbia.

"You think you know where you're going, but you're lost all the same," he said.

"From the time I set foot on this campus, I saw Alma Mater welcoming me in," Marco Viti, SEAS '14, said. "Now she just looks like she's ready to get rid of me."