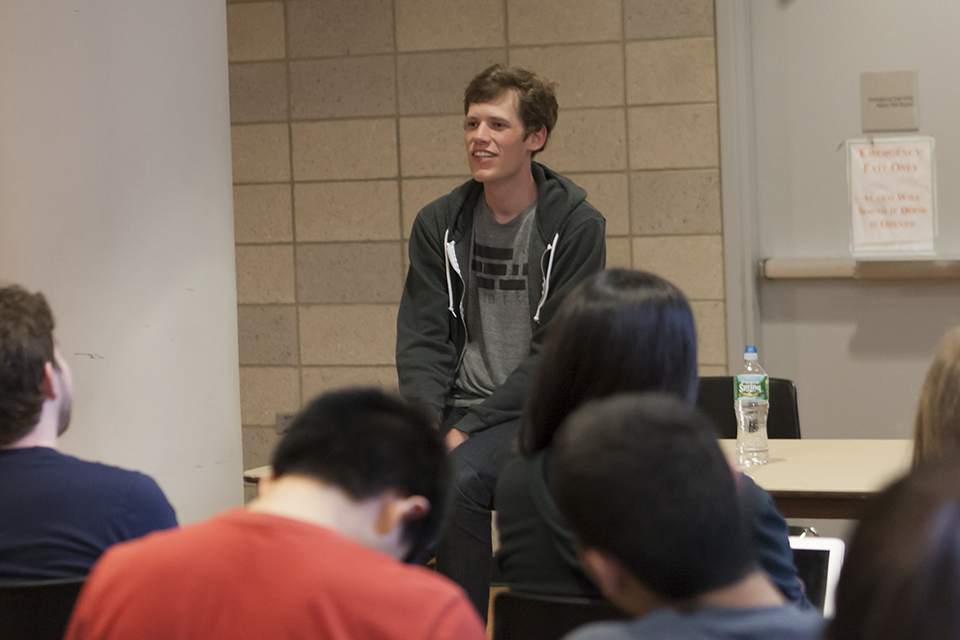 Christopher Poole, the founder of 4chan, talked about his startup and internet anonymity on Monday night in Lerner Hall.

Christopher Poole, the founder of 4chan, delivered an informal talk on Monday evening in Lerner Hall, in which he candidly chatted about the popular image board, addressed concerns about anonymity, and fielded questions about startup businesses.

At the event, sponsored by the Application Development Initiative and the Columbia Organization of Rising Entrepreneurs, Poole addressed a crowd made up chiefly of computer science majors, acknowledging his site's humble beginnings.

"4chan's been interesting to say the least," Poole said. "When I first set it up I was 15, I was bored, and I liked anime. Now about 20 million people or so use it."

Founded in 2003, 4chan is an anonymous image board, which, over the last decade, has produced a large amount of the Internet's most viral content, despite its minimal layout and the ability of users to post anonymously.

However, Poole said that the site has also carved out a reputation as one of the darker sites on the Internet. Poole described his decade managing 4chan as "10 years of watching crazy people."

"It looks like ass but that's part of the charm," Poole noted bluntly. "It allows for emergent behavior which results in people making cool stuff."

Anonymity was a common theme when the floor opened up to questions.

Daniel Sims, SEAS '14, made reference to the heated debates on Bwog comments, and asked whether anonymity helps to embolden vitriol.

"I think it speaks less to the anonymity and more to people," Poole responded. "There's an expectation of anonymous sites and people draw broad conclusions, but there's just as much intolerance on Facebook, Twitter, and YouTube comments. 4chan  also has a stigma—there are 68 boards apart from /b/ and people have surprisingly civil discussions on them."

Poole further noted that he saw Internet demand moving more toward an anonymous and pseudo-anonymous state, emphasized by the popularity of apps such as Whisper and Snapchat.

"We've moved to a friendship-based and intent-based Internet. You see an uptake in anon apps as a result of that," he said. "There's a real demand for a transient nature of information."

Questions were also asked about advice for setting up tech startups and seeking venture capital. Poole advised prospective entrepreneurs to branch out before they ask for funding.

"A lot of people aspire to raise venture capital but too many people start there first—you become holder to an extra party, which limits you. There's a lot of things you can do before you reach the stage of asking for venture capital."

Poole further emphasized the risks of going at a project alone.

"A major problem for 4chan in thinking about succession is that I never had a partner or co-founder," Poole said. "The ship goes down with the captain, which is a gaping dysfunction."

Responses to the talk were overwhelmingly positive—Sims described it as "the most awesome thing in the history of awesome." Poole stuck around after the talk was done to take photos and chat with members of the audience.

However, some audience members were less interested in asking Poole about the value of anonymity and venture capital.

Nicolas Biekert, SEAS '13 and now a SEAS graduate student, was hoping to persuade Poole to make him a moderator on 4chan's sports board.