After delays, Ennis Francis construction slated to begin in May

After delays, Ennis Francis construction slated to begin in May 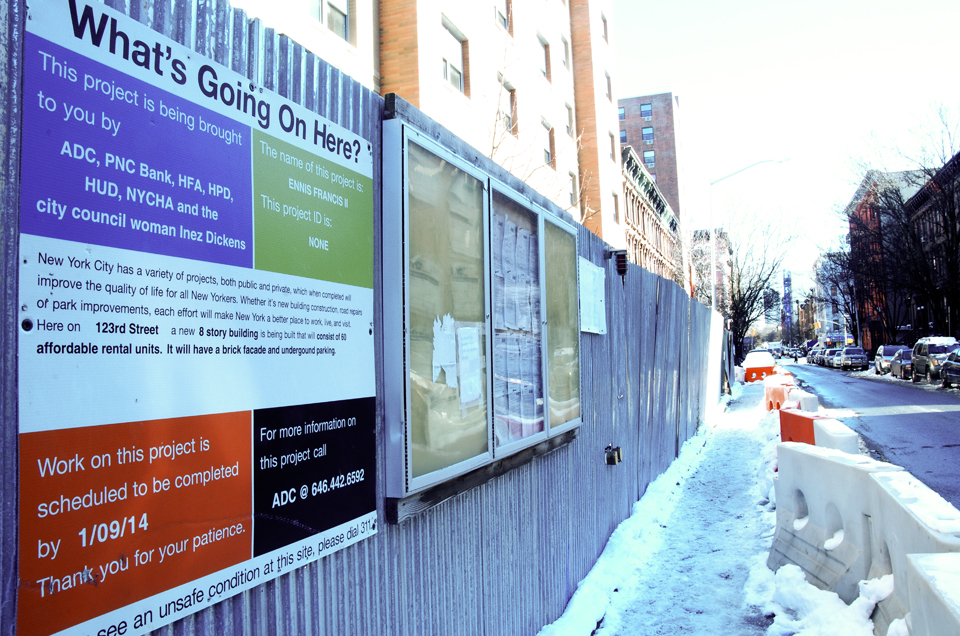 After several delays, Abyssinian Development Corporation has promised that construction on the controversial Ennis Francis II houses on West 123rd Street will begin again in May.

Abyssinian Development Corporation has promised that construction will begin again in May on the controversial Ennis Francis II houses on West 123rd Street.

Construction on the project—intended to replace the original Ennis Francis houses on 124th Street and provide new homes for residents in the low-rise complexes—stopped in April 2013 when ADC ran out of money, in spite of a projected January 2014 completion date. The building permit posted on the site fence indicated the permit was renewed on Jan. 22.

"We got funds through and negotiated a development deal that will build more housing," the Rev. Calvin Butts of ADC told the New York Daily News earlier this week. "What really hurt our development corporation was the recession and real estate deals we got into. Banks shut down on us. There was no malfeasance."

ADC is a nonprofit real estate development group under the Abyssinian Baptist Church, where Butts works as reverend.

Joshua Bauchner, a former Community Board 10 member—his six-year term ended on April 1—and a member of Friends of West 123rd Street, is skeptical that the project will be competed soon despite the promise by ADC.

"With all due respect to Reverend Butts, I'm not confident that it's going to change construction financing," Bauchner said. "Our concern from the beginning was that they didn't have the competency."

Nathan Lucas, a resident of the neighborhood for 45 years, was standing on the sidewalk next to the construction and smoking cigars with a friend on Wednesday.

"It looks like more work is not getting done than is getting done," he said. "Harlem is Harlem. They are going to tell you with the whole gentrification process that it's getting better. But people get displaced. I think they want them to get comfortable somewhere else so they don't come back in."

Bauchner said that the 123rd Street Block Association has reached out to Manhattan Borough President Gale Brewer, "with a lot of documentation," after receiving support from her predecessor, current Comptroller Scott Stringer.

"Community Board 10 has completely abdicated their responsibilities. We're concerned that there is going to be a big empty construction site," Bauchner said.

In September 2010, CB10 passed a resolution in support of the Uniform Land Use Review Procedure application to begin phase 2 of ADC construction. The resolution acknowledged the loss of 12 housing units with the construction of the 60 new units, and accepts that ADC will make up for this with additional units in phase 3.

Construction began on the units in 2012, but ADC stopped paying its contractor, A. Aleem Construction, in January 2013.

In November 2013, ADC said that it had found a new contractor and that construction would begin again in January 2014.