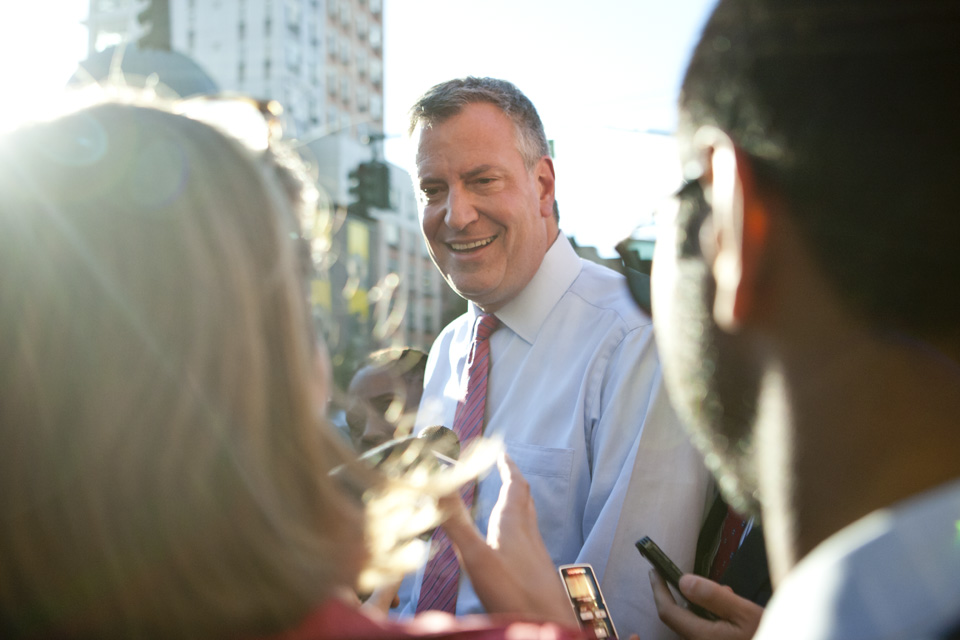 Mayor Bill de Blasio signed a bill on April 15 that will grant equal workplace protections to both paid and unpaid interns in the city. The bill will take effect in June.

A bill signed last week by Mayor Bill de Blasio will extend equal workplace protections to unpaid interns in New York City, but some intern-rights activists say that it's only a first step towards ensuring rights for interns.

At the bill signing on April 15, de Blasio described the amendment as clarifying that interns, both paid and unpaid, are guaranteed the same protections as regular employees under the city's human-rights laws. New York City joins Washington, D.C., and Oregon, which also enacted similar protections in 2009 and 2013, respectively.

"New Yorkers deserve to work in a safe environment without fear of harassment or discrimination," de Blasio said in a statement about the bill. "This legislation will ensure that interns, paid or unpaid, are entitled to workplace protections under the law."

"Interns deserve equal protection under the law, and this legislation—which I first introduced last year—does just that, extending the City's Human Rights Law to include unpaid interns," Manhattan Borough President Gale Brewer, GS '97, who presented the bill, said in a statement.

Brewer started working on the bill this year in response to the case of Lihuan Wang, a Syracuse University student who was sexually harassed as an unpaid intern for Phoenix Satellite Television. In 2013, a federal judge threw out her case after determining that only employees—and not interns—were covered under the city's workplace-protection laws.

Still, detractors of the bill said that it doesn't address more systemic problems in how unpaid internships are defined. Under the current federal Fair Labor Standards Act, unpaid internships must fulfill six criteria to be legal—including that it is for the educational benefit of the intern and that the employer does not derive immediate advantages from the intern's work.

"In the New York City bill, they emphasize that they define interns as people who are receiving training ... that the experience is for the benefit of the individual," Dedunu Suraweera, SSW '12 and an organizer for Intern Labor Rights, said.

But because there is no clear way to show whether or not an internship actually benefits the intern, Suraweera said that unpaid internships can fall into a "gray area."

"If an intern can't prove that they fall within these guidelines, what happens to their protections?" she said.

"Arguably, most of the internships in the city actually violate labor law," Peter Sterne, CC '14, who runs Who Pays Interns, a blog that tracks interns' wages across the city, said.

And while interns in the for-profit sector can apply for back pay if they argue their internships offer no educational benefit, the situation is more complicated for interns in the public or nonprofit sector, whose work can be classified as volunteerism.

"A lot of these organizations are about fighting for social justice or fighting inequality, but if you as a nonprofit are not modeling that sense of inclusiveness and support for your staff in your organization structure, then what are you really fighting for?" Suraweera said.

Sterne, who previously had unpaid internships at the New York Observer and the Columbia Journalism Review, said that the new bill doesn't go far enough in ensuring the rights of interns.

"It may have been better if the city council had just said that anyone who works for an employer, paid or unpaid, is protected from sexual harassment," he said. "It reinforces the idea that unpaid internships are legitimate by protecting unpaid internships and treating them as distinct from employees."

Still, he said he remained positive about the City Council taking action.

"Even though the bill may not be ideal, the fact that the City Council reacted so quickly and so strongly to the idea that unpaid interns are not protected from sexual harassment is part of this larger movement of seeing interns as employees who need to be subject to labor-law protections," Sterne said.

At Barnard and Columbia, administrators say that their primary responsibility is ensuring students know their rights as interns and have support.

Amy Zavadil, associate dean for equity and Title IX coordinator at Barnard College, said that students working at internships "may encounter gender inequities or potentially discriminatory behaviors that unfortunately persist as factors in many workplaces."

"I would encourage any student to talk with me or my colleagues in Career Development about any adverse experiences—we are available to help navigate these types of situations, and it is also important for us to know of such experiences to inform future intern placement options," she said in an email.

Robert Earl, director of the Office of Career Development at Barnard, said that companies that recruit Barnard students for internships are required to adhere to the school's Equal Opportunity Employment Policy. He also said that Barnard is planning a series of workshops for the fall semester to help inform students about their rights within the workplace.

"The Center for Career Education encourages students who have found internships through LionShare or are on CCE-sponsored programs to share their work experiences and report any concerns," Kavita Sharma, dean of the Center for Career Education, said in an email. "Career counselors and members of the CCE Employer Outreach team are always available to meet with students to answer any questions, discuss internship experiences and provide guidance."