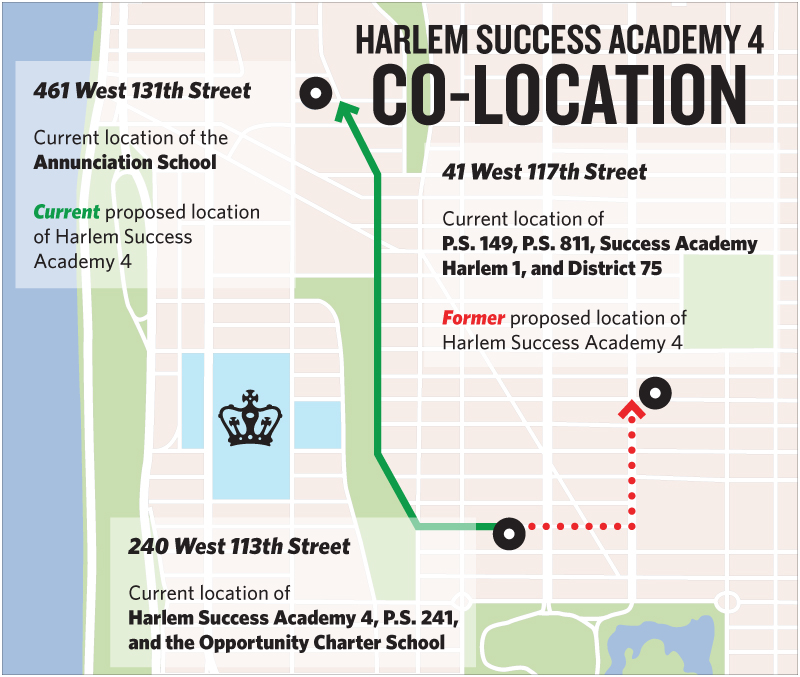 Under a new agreement announced by the city on Saturday, the middle grades of Success Academy Harlem 4 will now move into the Annunciation School.

The mayor's office announced on Saturday that the fifth through eighth grades of Success Academy Harlem 4 will move to the Annunciation School on Amsterdam Avenue and 131st Street, ending months of confusion and conflict over the future of the previously canceled charter school co-location.

Harlem 4, which currently is located in a school building on 113th Street and Frederick Douglass Boulevard, was approved last year to move its middle grades into another school building on 117th Street and Lenox Avenue that is already home to two public and two charter schools. Newly elected Mayor Bill de Blasio canceled the plan in February as part of a comprehensive review of school co-locations approved under the Bloomberg administration.

"It doesn't matter whether a child attends a district school, a charter school, or a parochial school—these are all our kids," First Deputy Mayor Tony Shorris said in a statement. "We pledged to parents we would have a safe, high-quality environment for these students, and this outcome delivers on that promise."

Both the original co-location plan and de Blasio's subsequent cancelation set public school and charter school parents on edge—parents at P.S. 149 and P.S. 811, the two schools Harlem 4 would have been co-located with, said in 2013 that squeezing a third school into the building would place tremendous space constraints on the schools' special needs programs, while 19 Harlem 4 parents and Success Academy Charter Schools filed a lawsuit against the Department of Education in March, saying the reversal of the co-location was unlawful and did not follow procedure. The 2014-15 New York State budget, approved in March, also mandated that the public school system either provide or find space for charter schools.

Exacerbating the already confusing situation was the fact that the city's middle school application deadline passed on March 12, two weeks after the co-location was reversed.

Negotiations between the city and the schools currently operating on the announced sites are ongoing, but Eva Moskowitz, founder and CEO of Success Academies, said in a statement that she accepted the new proposed spaces as a solution to the issue.

"We are deeply grateful to the mayor for his support, which will enable us to serve these students. I'm heartened we've been able to put politics behind us and establish a positive working relationship," she said.

The original co-location plan would have reduced the number of students the other schools at the Lenox Avenue campus could accommodate, potentially displacing special needs students at the public schools. Space is already short at P.S. 149 and P.S. 811—they share a cafeteria, a gym, and an auditorium with two already co-located charter schools.

Sonya Hampton, PTA president at P.S. 149, said she was pleased with the news, but added that her school's existing problems have not all been resolved.

"811 is still having gym in the classroom, they still don't have recess, and they still eat at 10:40 a.m., but I'm glad for what we got," she said. Still, she added, "when I see my 811 students tomorrow morning I can tell them they don't have to go nowhere, and they can continue to learn where they're welcomed and cared about."