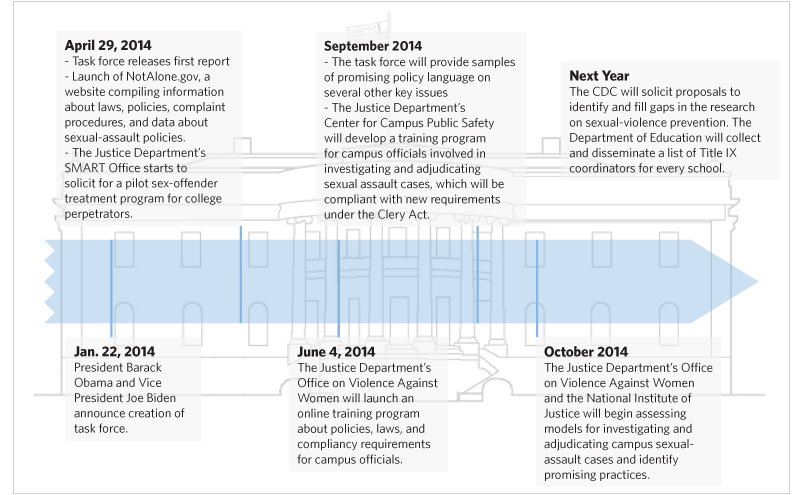 Five days after a group of students filed a federal complaint alleging Barnard and Columbia are not complying with Title II, Title IX, and the Clery Act, a new report released by the White House on Tuesday could help expedite changes that students are demanding.

The White House Task Force to Protect Students from Sexual Assault released its first report on Tuesday outlining a comprehensive set of expectations for universities' policies regarding sexual assault and a series of upcoming initiatives by federal departments to improve training, transparency, and the information available to students.

"All universities and colleges across the country are going to be checking frantically this week to make sure their policies are in compliance with" these recommendations, said Christina Brandt-Young, a senior staff attorney for Legal Momentum, a defense and education fund that focuses on women's issues.

The task force, formed by President Barack Obama, CC '83, in January to examine the broader issues of sexual assault on campus, put out the 20-page document outlining a wide-ranging collection of changes to be made by the Department of Education's Office for Civil Rights and the Department of Justice. With the report, the White House also launched NotAlone.gov, a website which compiles information about federal policies on campus sexual assault, reporting procedures, Title IX and the Clery Act compliance requirements, and data sets related to sexual assaults on campuses nationwide.

Among the changes outlined in the document is a 90-day limit on a voluntary-resolution agreement if a school is found in violation of Title IX—which could mean the Barnard/Columbia case will move faster than previous complaints filed against other schools.

"Some schools, these investigations and negotiations drag out for literally years without any voluntary resolution agreement," Brandt-Young said. She referred to the situation at Tufts University.  The OCR announced on Monday that Tufts was violating Title IX after the university revoked its agreement to a voluntary resolution—almost four years after the case was filed in 2010.

"The statement that OCR has decided to start placing a 90-day limit on the negotiation period for a voluntary-resolution agreement if a school is found in violation of Title IX is the single most important policy change announced today that will affect the Columbia and Barnard investigation," Brandt-Young said. "The 90-day resolution may cause things to be resolved one way or another much faster than we would have otherwise expected."

The White House also plans on increasing the amount and accessibility of information related to sexual assaults on campuses nationwide. NotAlone.gov, which includes a database of every noncompliance complaint made to every college, says on the website that it aims to provide students with "plain English definitions of some complicated legal terms and concepts."

Over the summer, the Justice Department's Center for Campus Public Safety will develop a training program for campus officials involved in investigating and adjudicating sexual-assault cases, which will be compliant with new requirements under the Clery Act. The Department of Education will also compile and distribute a list of all Title IX coordinators nationwide starting next year.

"They have to apply the same standards to everybody—that's what transparency is about," Brandt-Young said. "It's about putting schools and students on notice about what they can and should expect."

Two recommendations made by the report—that rape crisis centers or similar emergency services be available 24 hours a day and that interim procedures should be clarified—resonates with concerns raised by students over the past months about Columbia's sexual-assault policies.

"Bingo. This is exactly what we've been saying all along," Rakhi Agrawal, BC '14 and one of the 23 students who filed the complaint, said about the recommendation that support be available around the clock. "There's a very big need to have emergency services available at the times when sexual assault happens which, hello, is 24/7. That's nonnegotiable."

Barnard and Columbia have come under fire over the accessibility of the Rape Crisis/Anti-Violence Support Center, which is not staffed 24 hours a day and is located in Hewitt Hall, a Barnard dorm—which means that it is less accessible to Columbia students. While the RC/AVSC has a 24-hour student-staffed peer hotline, students have also pushed the University to consider hiring a trained professional.

Sejal Singh, CC '15, who helped organize Columbia's Coalition Against Sexual Violence, is also one of a number of students who have pushed the University to better clarify the interim measures available for survivors. Friday's complaint alleges that the University has been slow or nonresponsive to requests from survivors to switch housing or classes during investigations.

"There are still students who don't understand what interim measures are available, what students will qualify for interim measures—it's unclear when you can switch out of a class that you're taking with your attacker or whether you qualify for disability services in that situation," Singh said. "That information needs to be a priority because students are dealing with those issues every day."

Tuesday's federal report said that "students who report sexual violence have a right to expect their school to take steps to protect and support them, including while a school investigation is pending" but did not outline specific enforcement procedures.

And while student activists say they're heartened by the increase in federal support for their cause, some said they felt that not all members of the community may be granted equal access to that support.

"One in five women is sexually assaulted in college," reads the first sentence of the task-force report—a precedent which Singh said felt problematic.

"It's really important that we explicitly acknowledge that there are a lot of assaults that don't fit that narrative," Singh said. "Some strange man jumps out of an alley and grabs an innocent girl—that's not what the majority of rape looks like. It can happen between any two people with any given history and any given gender identity."

It will be at least several weeks before the complaint submitted against Columbia can be formally reviewed by the OCR, which will then decide whether or not to send an investigative team to Columbia's campus. But the University in the meantime has responded positively to Tuesday's report.

"We all must be dedicated to seizing this moment of heightened attention if we are to reduce and ultimately eliminate sexual assault and gender misconduct on campuses," a University statement released Tuesday afternoon said. "All who care about higher education should applaud the President, the Vice President, and our own Senator Gillibrand for leading this effort."

"This is the guidance that universities have been looking to receive from the government," Deputy Title IX Coordinator for Faculty and Staff Concerns Michael Dunn said in an interview. "I know there will be a number of stakeholders at the University figuring out how to implement these recommendations."

"This conversation on campus is now a national dialogue," he added, citing the "wealth of information" that came out from the White House on Monday.

Still, Brandt-Young said that while the federal report may help define requirements, she's skeptical if universities will follow through.

"What remains to be seen is whether the promise of these documents is carried out," Brandt-Young said.